This story is part of Mind in the Machine, an ongoing Globe series about artificial intelligence

Canada is bracing for an intense global technology race as Ottawa, the provinces and corporations pump hundreds of millions of dollars into the burgeoning artificial intelligence sector in a bid to keep the country competitive as it faces technological changes in the years ahead.

On Tuesday, Quebec committed $100-million to support Montreal's flourishing AI sector after last week's $125-million commitment by the Canadian government to fund free-standing AI research institutes in each of Montreal, Toronto and Edmonton as part of a Canada-wide strategy. The goals of the institutes are to compel Canada's best and brightest AI talent to stay in Canada; to attract the world's best researchers; to train legions of AI practitioners to fill a chronic shortage; to foster commercialization of AI-driven startups; and to work with corporate Canada to improve operations by using AI.

Details for one of those, Toronto's Vector Institute, which is affiliated with globally renowned University of Toronto machine-learning expert Geoffrey Hinton, will be unveiled Thursday. Vector is set to receive about $40-million from Ottawa, $50-million from Ontario and $80-million from 31 corporate donors, including Shopify Inc., the Big Five banks, Loblaw Cos., Magna International Inc., Thomson Reuters Corp. and Air Canada. Google Inc. is also providing $5-million and opening a basic research lab in Toronto headed by Dr. Hinton, a Google employee since 2013. "There's a gold rush to get into deep learning and a huge shortage of talent," Dr. Hinton said.

It's a big moment for those charged with ensuring Canada builds on its groundbreaking advances in AI and benefits from technology that is set to cause wide-scale improvements – and worrisome disruptions.

"We have to make sure we're growing great companies and making our companies the best users of AI in the world, not buying AI services from people we ship south," said former chief executive of Toronto-Dominion Bank Ed Clark, an adviser to Ontario Premier Kathleen Wynne and one of the driving forces behind Vector. Canada's emergence as an AI hot spot was 30 years in the making. And it was because of decisions by three top researchers to choose Canada over the United States as their home. British-born Dr. Hinton and American professor Rich Sutton moved north from U.S. universities, and Montreal-raised Yoshua Bengio, a deep learning pioneer at the heart his city's AI scene, returned to Canada after doing postdoctoral work in the United States.

All three were compelled by the opportunity to focus on research – and because they didn't want to live in the United States. "I didn't like American politics," Dr. Hinton, who arrived in 1987, said. Dr. Sutton says he came to the University of Alberta in 2003 for "the three Ps" – good people at the U of A; a good, generously funded position; and politics. "George Bush had just started invading other countries and I wanted to get away from all that," Dr. Sutton, a pioneer in a branch of AI known as "reinforcement learning," said. Dr. Bengio didn't want to work on U.S. military projects, a necessity to access big funding in the United States.

AI had been a source of hype and hope for decades, with many setbacks along the way. Machine learning in particular was a field "that had no hope of commercial application," said Alan Bernstein, CEO of Canadian Institute for Advanced Research (CIFAR), which for years funded scientists and is managing Ottawa's AI funding program.

That began to change as the likes of Google, Amazon and Netflix began to effectively use AI to power Internet searches and recommend content; as Apple Inc. and Google commercialized smartphone personal assistants; and as self-driving car projects progressed over the past decade. AI programs also started beating humans on Jeopardy! and in Go and poker.

Meanwhile, the trio of Canadian scientists toiled in a corner of AI known as machine learning, which Dr. Hinton has described as the "lunatic fringe," because it was dismissed by many for years. Dr. Hinton and his peers believed that by mimicking the brain they could make computers as adept as humans in recognizing speech and images – and change the world.

Validation came in 2012 when two of Dr. Hinton's students unveiled a program in a competition that was twice as accurate as the nearest rival in identifying objects. Silicon Valley moved quickly, realizing the dawn of a long-promised AI-centred era had arrived. Researchers from U of T and the University of British Columbia now hold senior AI positions with Google, Apple, Facebook, Uber Technologies, Microsoft Corp. and Elon Musk's OpenAI, and Microsoft and Google have snapped up Canadian AI startups. Global venture capital funding for AI startups skyrocketed, to $5-billion (U.S.) last year from $589-million in 2012, according to CB Insights. Now industry is looking at the massive predictive power of AI to transform business in such areas as inventory management and to aid health-care practitioners in earlier detection of medical conditions.

Canadian observers, meanwhile, warned that if this country didn't get its act together, it would again end up sidelined in the global technology race. "We worried this would be yet another story where Canada developed the science but failed to reap the economic benefits," said Tiff Macklem, dean of the University of Toronto's Rotman School of Management.

"I realized in the last two years that if we don't do something about commercialization of AI here in Canada, we're going to be big, big losers," added Dr. Bengio, who has turned down top offers from Silicon Valley firms.

Soon after Prime Minister Justin Trudeau's election in the fall of 2015, officials in his government heard Canada needed to do more to protect its AI legacy, pushed by Canadian entrepreneurs such as Scott Bonham and corporate CEOs including Magna's Don Walker and Royal Bank of Canada's Dave McKay. Around the same time, Toronto AI startup entrepreneurs Tomi Poutanen – a former student of Dr. Hinton who went on to hold senior roles in Silicon Valley – and partner Jordan Jacobs conceived of an idea to fortify Toronto's AI sector by creating an institute that would expand the number of machine-learning graduates and create new opportunities for established and emerging companies to benefit from AI.

They approached U of T professor Rich Zemel and Dr. Hinton with the idea last June and both signed on. When they met Mr. Clark last fall, he was immediately smitten and sold the idea to the Ontario government, securing $50-million in provincial funding. The group then pitched for funds from both Ottawa and industry, targeting Canadian firms and only those U.S. firms with AI labs in the region – or stated intentions to open them. At the same time, government officials in Ottawa were working through different scenarios for funding AI initiatives nationally.

Then, in January, the group behind Vector wrote a column that argued for a Toronto-based AI institute without properly acknowledging their peers in Edmonton and Montreal. Though they didn't intend to offend, "there were certainly feathers that got ruffled" across the country's collaborative AI community, said Cameron Schuler, executive director of the Alberta Machine Intelligence Institute at U of A. Added Mr. Bengio: "I was disappointed the way this was done."

But CIFAR's Mr. Bernstein convened a call with the country's AI leaders to patch up differences and told them more important issues were at hand. They met in mid-February in Toronto and hashed out a proposed pan-Canadian initiative that would have efforts in three cities – including Vector – funded by Ottawa. The proposal also called for funds to study the broad societal impact AI will have on workers displaced by technology. The proposal, with its $125-million price, was accepted by government and included in the budget just five weeks later. Earlier this month, the group met again in Montreal to prepare to apply for more funding under Ottawa's $950-million "superclusters" program.

"The threat is not between Toronto and Montreal, but Canada and the rest of the world," said Montreal business leader Pierre Boivin, chairman of the local technology sector body Quartier de l'innovation, who chaired the meeting. "We need to quickly build teams around these leaders in the field, but more importantly build effective ecosystems that lead to Canada being a producer and exporter of AI."

How a U of T professor is creating high-tech superstars
Subscriber content
March 17, 2017 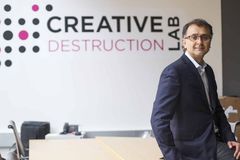 Opinion
It’s time for Canada to invest in developing artificial intelligence
March 26, 2017
Federal budget’s innovation agenda keys on AI, intellectual property
Subscriber content
March 22, 2017
Follow Sean Silcoff on Twitter @SeanSilcoff
Report an error Editorial code of conduct
Due to technical reasons, we have temporarily removed commenting from our articles. We hope to have this fixed soon. Thank you for your patience. If you are looking to give feedback on our new site, please send it along to feedback@globeandmail.com. If you want to write a letter to the editor, please forward to letters@globeandmail.com.
Comments