Head's up: how cities are trying to manage people who walk and text

Traffic lights are embedded in the streets to warn people using their phones in Augsburg, Germany.

Projects in Belgium, China and the U.S. have tried to bring order to the sidewalk in an age where smartphone users are more likely to be looking at their screens than the traffic – human and vehicular – around them. Now, a German solution, as Catherine Phillips reports

A city in Germany has employed a new way to address the dangers of distracted walking: embedding traffic lights right in the pavement.

City officials in Augsburg installed the lights at ground level in response to an increase in pedestrian traffic accidents, including the March death in Munich of a 15-year-old who was hit by a tram while using her cellphone. Officials hope the lights will alert inattentive cellphone users to traffic signals before they attempt to cross the street.

Although Augsburg's sidewalk signals are the first of their kind, anti-distracted walking measures have been popping up in cities across Europe and the United States for several years.

Text walking lanes introduced for phone users in Antwerp, Belgium. It is an initiative of Mlab, smartphone laboratory located in the city.

Last year, segregated text-walking lanes were painted on the streets of Antwerp, Belgium.

However, after gaining international attention, it turned out the temporary lanes were just a marketing gimmick by a cellphone repair company. 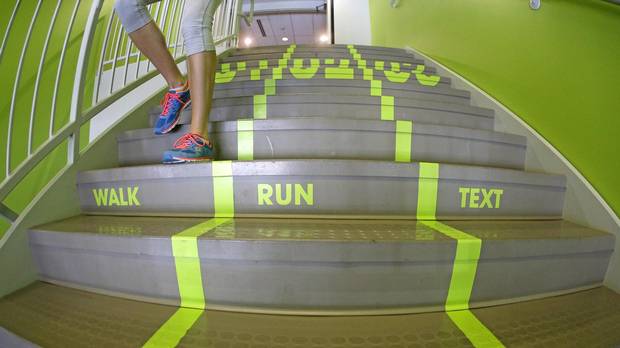 Residents walk on a lane painted with instructions to separate those pedestrians using their phones in southwest China’s Chongqing municipality.

All eyes were on China in 2014 when a 30-metre-long texting lane was installed in the city of Chongqing. It later emerged that the lanes were limited to the city's amusement park, Foreigner Street.

A similar stunt appeared the same year during a behavioural experiment being filmed on 18th Street in Washington, D.C., for the National Geographic show Mind Over Masses. The texting lanes read "Cellphones" and "Walk at your Own Risk."

It only takes a quick YouTube search of text-walking fails to see people falling into water fountains or down a flight of stairs.

A U.S. National Safety Council report shows that distracted walking accidents involving cellphones accounted for more than 11,000 injuries between 2000 and 2011 in that country alone.

The health risks of text-walking

In 2013, Stanford University displayed posters on campus warning text-walkers to stay alert, while Philadelphia thought it would be funny to paint "e-lanes" on the sidewalk for April Fool's Day in 2012.

The Utah Transit Authority has taken cellphone safety seriously by introducing a $50 fine for distracted walking near rail crossings, a fine that increases to $100 for repeat offenders. Distractions in this case are not limited to cellphones, but include listening to music and reading while crossing the tracks.

However, texting while walking isn't just a safety risk, it's also really bad for your neck.

According to research published in Surgical Technology International by Dr. Kenneth Hansraj, chief of spine surgery at New York Spine Surgery and Rehabilitation Medicine, a human head weighs between 10 and 12 pounds in an upright position.

Tilt your head forward to, say, scroll through Instagram on your smartphone and the weight of your head and subsequent pressure on your spine increases; in a worst-case scenario, it's like balancing 60 pounds on your neck. The ensuing discomfort is often called "text neck" – back pain and poor posture that stem from endless scrolling.