Blackberry Ltd. said more than 10 million people signed up for the BlackBerry Messenger service (BBM) in the first 24 hours after its release on Monday for non-BlackBerry users. The company says it is processing new users at a rate of 500,000 an hour, with millions more queued up.

What makes BBM different from regular SMS? For one, the application encrypts data traffic in transit between the BlackBerry Server and BlackBerry devices automatically.

Here is a step-by-step guide through the complicated infrastructure of sending and receiving a BBM. Read the full story.

Scroll below the image to learn more 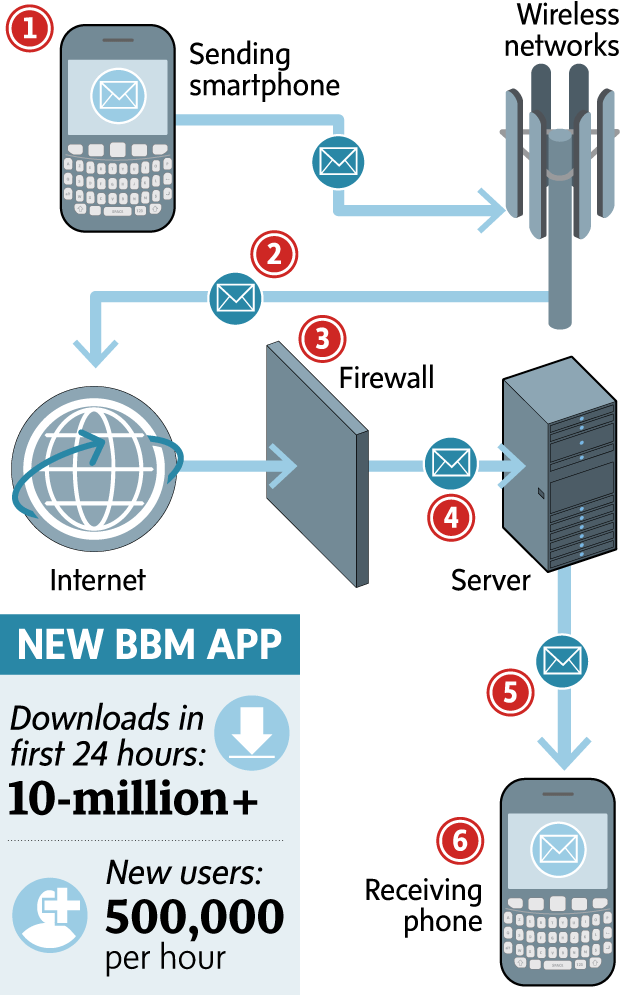 1. Encryption key is stored in the user’s secure mailbox account.

2. Blackberry messages don’t have to be short, but short message service text messages (SMS), in the Latin alphabet, max out at 160 characters. For other alphabets, such as Chinese, the maximum SMS length is 70 characters.

3. Data sent to and from the smartphone is encrypted using the private key retrieved from the user’s mailbox.

4. Data remains encrypted in transit and is never decrypted outside of the firewall.

5. Instant messages can only be sent to someone if you know his or her PIN code, or if they are already in your contact list.

6. Encrypted information travels securely to the smartphone where it is decrypted with the key stored there.

Since BlackBerry messages are sent as data, users do not incur individual charges for each message as they would through regular SMS texting. While phone companies have introduced bulk texting plans, many options still include caps on the number of individual SMS messages that can be sent. BBM has no such limit.