What is being billed as the last monolithic release of Windows has just hit the streets, and it's an interesting beast. Windows 10 is a mix of the old familiar Windows 7 and the less-than-enthusiastically-received Windows 8, with a few twists thrown in to keep things interesting.

Despite that, it manages to perform reasonably, even on a first-generation Surface Pro tablet.

The first thing you'll notice is that you boot into the desktop, and when you click the Start button, the Start menu is back. But it's a revamped Start menu, with a list of most frequently used apps at the top of the list, a blank space which, it is rumoured, may (heaven help us) be used to promote sponsored apps at some point, then File Explorer, Settings, Power, and All Apps (click it, and you get an alphabetic list of everything installed on your system). To the right, there's a batch of live tiles; you can configure it to include any items you want, and you can size the tiles just as you could in versions of Windows 8.

Cosmetically, Windows 10 is very subdued. Get used to what's called a hamburger menu – three horizontal lines stacked like the bun and meat in a burger, that you click on to get a drop-down menu – as well as flat grey title bars and links that may or may not be highlighted or underlined. It's sometimes confusing, especially on help screens where you're being told to launch something and there's no indication of what to click. I suspect that will get cleaned up in not too long – there are a few of these oddities still lurking, even though I'm working on the build that was sent to computer manufacturers. I've already received several fixes through Windows Update.

Speaking of which, users will have much less control over installing updates than before. Home-version users will be blessed with the updates when they come out – they have no choice. Pro users can defer installation. Enterprise users will have the most control, but they're not getting the free upgrade either.

Windows 10 keeps the Taskbar in place at the bottom of the screen, and you can still pin things to it, but take note of the icons already in place. The circle next to the Start button is the search button, which will offer Cortana, Microsoft's Siri-like digital assistant, to Canadians later this summer. At launch, only the U.S., U.K., Germany, France, Italy, Spain and China will have Cortana support. The reason: Microsoft is trying to localize her personality for each country; I gather in Canada, she will be a hockey fan. I wonder if she will say"eh" a lot.

Task View is the next icon (to me, it looks like a table with two chairs). It manages the new virtual desktops. With virtual desktops, you create separate work spaces within Windows, and can flip from one to the other rather than opening and closing (or minimizing) a groups of apps. For example, if you're researching and have a browser plus several documents open, you can put them on one desktop. If you feel the urge to deal with other unrelated tasks such as e-mail and a rousing game of Solitaire, they can be lurking on a separate desktop, ready to go. Then you can quickly flip back and pick up your research. It's quicker and easier than minimizing and maximizing and rearranging windows to get the screen looking right every time you switch functions.

Next on the Taskbar you'll see what looks like a slightly mangled Internet Explorer icon. That's actually Edge, the new browser that will replace IE. It's not just a cosmetic makeover, either. Edge has been written for the modern Internet, and allows you to annotate, save and share Web pages. Some sites, however, insist on IE, so you do get the option to open pages in Internet Explorer. 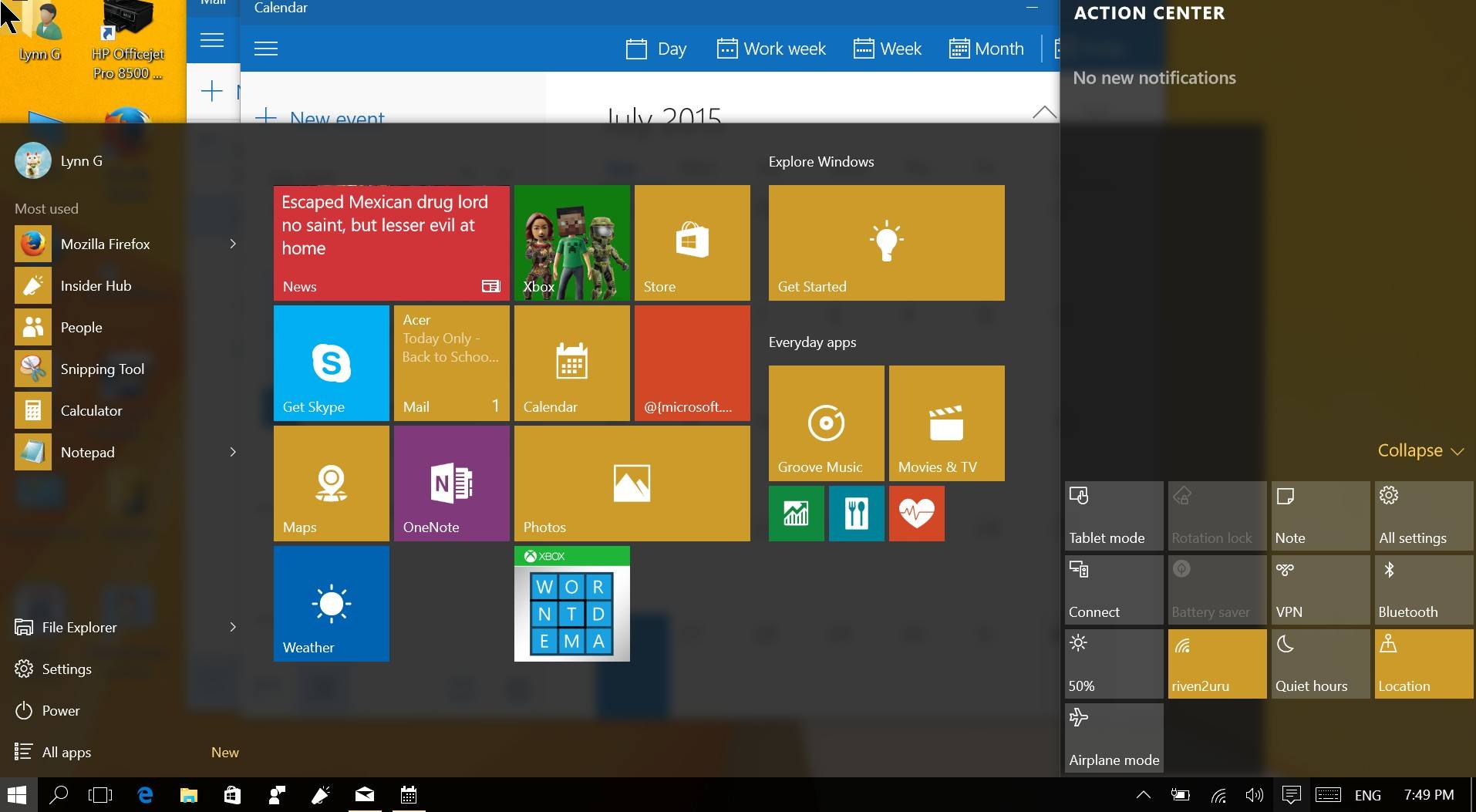 Now head to the far right, where you'll see what looks like a dialogue bubble from a cartoon. It's the Action Center, where you see all of your notifications, plus a series of tiles controlling common settings.

Windows 8 users will notice that the Charms bar, that batch of icons that popped out when you swiped in from the right or hit the top right corner of the screen with the mouse cursor, is gone. Its functions have been scattered here and there. Settings, for example, are now on the Start menu, and sharing is offered within each app.

Built-in apps like Mail and Calendar have received some much-needed love. Mail, although minimalist, finally allows you to add POP accounts, a sorely-missed feature in the Windows 8 app, and even includes an iCloud account type. However, the Live Tile on the start menu is rather glitchy, alerting me to"new" messages that have long since been read and deleted. Calendar, too, is very basic, but it works. On the whole, though, I must confess I prefer to use a more full-featured program such as Outlook.

Other app notes: Xbox music has been renamed Groove Music, and the Skype icon on the Start menu actually says "Get Skype" – it's not installed (and the promised native client isn't available yet). As in Windows 8, the invaluable OneNote app is preinstalled, and free.

The Store has been revamped so all devices – be they phone, tablet, PC, or HoloLens – come to the same place for their software, and your owned software collection is now contained in"My Library," which splits the apps into groups of what will or won't run on the device you're viewing the list on.

I installed the Office 2016 Preview, which works fine, as well as Firefox, and several utilities, all of which functioned as expected. The games I tried, primarily from Xbox, also behaved. Intel Security, AVG and Symantec all assure me that their security software supports Windows 10; Windows Defender is preinstalled, but it is not as well-rated as one of the other programs.

If you have a convertible system, Tablet mode will be of interest. You can set it to be enabled automatically when it senses that the hardware keyboard is no longer available, or have Windows ask you each time. It adjusts the screen and system behaviour to be kinder to touchscreen users, kicking apps up to full screen, spacing controls to be touched, not clicked, and enabling the soft keyboard as required.

Windows 10 should be comfortable for users of both of its immediate predecessors, even though there are still some rough edges. As you get going with Windows 10, you will discover other goodies, such as the improved Snap feature. Expect plenty of updates over the next little while.