More than two decades ago, a student accused a literature professor at Peking University of repeatedly sexually assaulting her. Friends said it was the reason the woman, Gao Yan, killed herself in 1998. The professor denied being at fault, received a slap on the wrist and continued with his academic career.

It was an event long relegated to the pages of unsavoury history at China’s most celebrated institution of higher learning.

But the dead student’s friends have not forgotten. In early April, one woman posted to social media an account of what happened to Ms. Gao, who was then 19. In doing so, she suddenly placed Ms. Gao’s long-ago suicide at the heart of a heated new conversation in China about the treatment of women.

In the ensuing tumult, the professor has been dropped from his position at Nanjing University (where he was then employed), students have been threatened for their activism − and, for a brief period, even the name of Peking University became a censored term on Chinese social media.

The sudden new importance of Ms. Gao comes amid a moment of profound cultural reflection in China, where social media have become a venue for a debate so potent it has on several occasions overcome the country’s commanding censors and, in the process, raised new questions about the exercise of official power in the authoritarian country.

In part, the debate has pitted elements of a socially liberal middle class against conservative authorities on questions of values, such as the treatment of women and members of the LGBTQ community.

But student demands for transparency over what happened to Ms. Gao have also echoed some of the expressions of youth discontent that preceded the deadly crackdown around Tiananmen Square in 1989.

At the forefront of those demands is a woman named Yue Xin, an activist, writer and student at Peking University who, with seven other students, called for university officials to disclose official records of Ms. Gao’s case.

Their demand for information has provoked a series of reprisals from Peking University, which Ms. Yue described in an impassioned social-media post in late April. University officials called her and at least one other student into lengthy late-night meetings. With Ms. Yue, they mentioned “things like ‘whether you can successfully graduate,’ ” she wrote.

Senior school officials, including the Communist Party committee secretary at the School of Foreign Languages, later sat down to tell her no records existed. They cited a lack of note-keeping at the time and a “work error” that resulted in lost paperwork.

Then, at 1 a.m. one recent Monday, Ms. Yue’s academic adviser “abruptly came to my dormitory with my mother,” Ms. Yue wrote in the post. They “woke me up, and demanded that I delete all data related to the Freedom of Information request from my phone and computer, and that I go to the Office of Student Affairs the next morning to guarantee in writing that I’d have no more to do with the matter.”

The school’s response “crossed a line,” Ms. Yue wrote. “I was scared, but furious. Was the Freedom of Information request a crime? I’d done nothing wrong, and could not regret exercising my glorious right as a Peking University student.”

In a statement, the university said officials acted “out of concern and worry for Yue’s condition,” since “teachers are like parents, they all sincerely love and care for students.”

But soon after Ms. Yue’s post began to spread through Chinese social media, it was deleted by censors, whose efforts to scrub the conversation at one point even extended to banning searches of “Peking University.”

“Actually Yue Xin’s case is not rare in China − it’s very normal,” said Zhang Leilei, a feminist and activist who has called for universities to tear down barriers to women making allegations of sexual assault. “The reason is simple: The school sees its own reputation as most important, and will not tolerate anyone who stands up to make trouble.”

Indeed, the silencing of Ms. Yue carried echoes of the arrest on March 8, 2015 − International Women’s Day − of the “feminist five,” a group of young activists who had succeeded in bringing national attention to women’s-rights issues in China.

”This is the logical consequence of an increasingly repressive regime under President Xi Jinping,” said Maya Wang, senior China researcher at Human Rights Watch. “Previously tolerated topics of activism, such as advocating for women’s rights, have suddenly become sensitive.” She called it “a feature of a very arbitrary power” wielded by the party under Mr. Xi, the country’s most authoritarian leader in decades.

The renewed debate over the death of Ms. Gao has also come at a time when public outcry is testing the limits of authorities in China to impose cultural mores. When tech giant Sina banned gay content from Weibo, which functions like China’s Twitter, a groundswell of anger caused it to reverse course within days.

When Human Rights Watch issued a report on the prevalence of sexist job advertisements among Chinese tech companies, those companies quickly deleted the offending content − even though the report itself was not widely reported in China, where work by Human Rights Watch often sparks government anger.

And even state media picked up on Ms. Yue’s censored commentary. The People’s Daily published an article about listening to voices from the younger generation. The Global Times, a nationalist tabloid under the Communist Party, reported a detailed account of what took place.

“Today’s social environment has changed a lot; it differs greatly from that of 20 years ago,” said Li Taifeng, a women’s-rights protection worker in Guangzhou, who uses a pseudonym for his protection.

The struggle for recognition, particularly on campus, marks a surprising counterpoint to the increasing demands for conformity to Communist Party dictates under Mr. Xi.

Last May, an instructor at the Beijing Film Academy was accused of sexually harassing a student, who reported the incident but was then subjected to such serious retribution that she did not graduate.

In December, a student at Nanchang University said she had been sexually harassed by a top official for seven months. In January, a doctoral graduate of Beihang University accused a professor of rape 12 years ago. In mid-April, students accused two professors at Renmin University of sexual harassment. When those accusations were censored online, students organized a small protest. One of those students, Yan Zihao, wrote that he has since been grilled by university staff, including a representative of the Communist Youth League, saying on social media that the experience left him dizzy and frightened.

“It is like if you don’t want to put yourself in danger, you have to sell others out,” Mr. Yan wrote.

Indeed, for those speaking up, ”the risk of revenge remains quite high, and it’s highly likely victims will be pressured and subjected to all kinds of rumours,” Ms. Zhang, the feminist activist, said.

She is nonetheless hopeful. “People are becoming increasingly supportive of victims, and the concept of opposing sexual harassment has, to a certain extent, become something the whole of society agrees on,” she said.

A Chinese woman with no arms is turning her online fame into social change
May 1, 2018 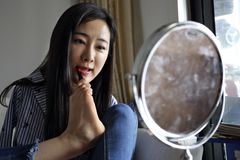 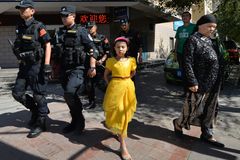 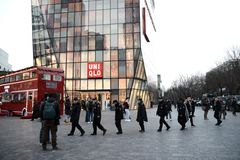