Tears fill Ephraim Osinboyejo’s eyes as he recalls the idealism that drove thousands of Nigerians like him into the streets to campaign against police brutality – and the night he saw young activists gunned down.

The 39-year-old businessman says he returned to Nigeria last year after two decades abroad because he wanted to help his country. When nationwide demonstrations began on Oct. 8, he volunteered to manage logistics at the main protest site in Lagos.

But what began as a largely peaceful movement, driven by young, tech-savvy activists who used social media to grab global attention, turned into some of the worst street violence the country has seen since the end of military rule in 1999.

Police and soldiers enforcing a curfew killed at least 12 people in two Lagos neighbourhoods on Oct. 20, according to witnesses and rights group Amnesty International. The army and police denied involvement.

In the following days, crowds set fire to police stations and government offices. Looting was reported at shopping malls and government food warehouses. Curfews were imposed on millions.

Protest organizers, some in hiding, are now urging followers to stay off the streets and campaign online as police have made their presence increasingly felt.

“I feel defeated. I feel disappointed. I feel sad,” Mr. Osinboyejo said at the Lekki district toll gate where hundreds had gathered to protest abuses by a notorious police unit known as the Special Anti-Robbery Squad (SARS).

Days later, cars were passing through the toll gate as the protests subsided. The image of a clenched fist daubed onto the road and a few Nigerian flags lying in a gutter were the only reminders of the joyful crowds who danced and sang there a week ago.

Protesters and government officials have both said that the people doing the looting and vandalism are not for the most part the same people who mobilized against police brutality.

“We completely condemn any form of violence or looting,” a coalition of protest groups said in a statement on Saturday.

Demonstrators accused officials of paying armed gangs to disrupt peaceful protests – a common tactic during elections, according to rights groups.

“If people cannot afford basic needs, you have people who are willing to do anything to get by,” Mr. Osinboyejo said.

Reuters could not verify the accusation. Videos of unidentified men attacking demonstrators in Lagos and the capital Abuja with knives and sticks were shared on social media early in the protests.

Spokesmen for the Nigeria Police Force and Interior Ministry did not respond to calls and text messages seeking comment.

Lagos State Governor Babajide Sanwo-Olu blamed criminal elements for the unrest, saying “miscreants were hiding under the umbrella of the protests to unleash mayhem.”

While such shootings may have been the catalyst for escalating unrest, analysts also point to the parlous state of Africa’s biggest economy.

About 35 per cent of people aged 15-34 are unemployed. Families already struggling to put food on the table because of double-digit inflation also face rising fuel and electricity costs, which the government can no longer afford to subsidize.

“The ingredients for a perfect storm have been there for a while,” said Malte Liewerscheidt, a vice-president with New York-based risk consultancy Teneo.

The violence brought widespread criticism of President Muhammadu Buhari, with many questioning his control over security forces and angered by his failure to condemn the killings in his first speech after the incident. He is in his final term as President, but his All Progressives Congress party could lose support from young voters.

SARS was disbanded on Oct. 11, but protests persisted with demonstrators calling for wider law enforcement reforms.

Around 2 p.m. on Oct. 20, news of a round-the-clock curfew started spreading through the crowd in Lekki, but many decided to stay, Mr. Osinboyejo said.

Around 7 p.m., armed men in army fatigues arrived, he said.

He and other organizers urged demonstrators to kneel down, wave flags and sing the national anthem, but the men raised their guns and shot into the crowd, six witnesses told Reuters.

“This place was a war zone,” Mr. Osinboyejo said. “The gunfire was relentless. … I didn’t think we would see tomorrow.”

The army says its forces were not at Lekki that night.

Days later, Nicholas Okpe, 37, lay in a Lagos hospital wheezing and coughing from a bullet wound to the chest.

An unemployed driver, he said he was collecting litter dropped at the Lekki protest site when the shooting happened. For him the campaign is about more than police reforms – it is about justice.

“Anger is inside our belly. Because many of us don’t get work, we just get frustrated,” he said.

The Feminist Coalition – a rights group that raised 147 million naira ($509,000) for the protests through crowdfunding, said on Thursday it was no longer accepting donations.

It would use any remaining funds to cover medical and legal bills, and provide financial support to victims of police brutality.

“We are young Nigerians with hopes, dreams and aspirations for our country. This means we need to stay alive to pursue our dreams to build the future,” the statement said.

Despite his sadness, Mr. Osinboyejo remains optimistic for Nigeria.

“There are a lot of young people who have come together, for the first time maybe, to say they will not stand by and watch their country burn,” he said, choking back tears.

Nigerian president’s office says ‘many lives have been lost’ in days of unrest
Subscriber content
October 24, 2020 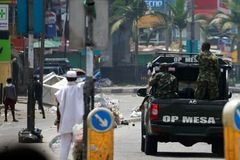 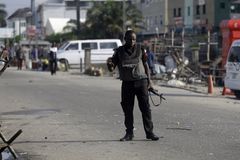 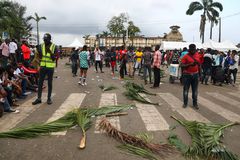