Seeing a group of six walk into her restaurant in Monti, a happening Roman neighbourhood where it suddenly became difficult this week to find a place to eat, the server pulled out her tape measure. Under a new government regulation, patrons could sit no closer than one metre apart.

It was a fleeting moment Monday night. Even more than the decision to shut major tourist attractions, it seemed to foreshadow that the Italian capital was about to become unrecognizable. Social life would disappear in a frantic attempt to stem the spread of the novel coronavirus.

Airline call centres were promptly overwhelmed and booking software systems couldn’t always keep up with the volume of ticket changes.

It was also our cue to leave. My partner and I joined a flood of people flocking to the airport Tuesday morning, visits cut short by a virus none of us had heard of a few months ago.

At the airport, masks were ubiquitous, far more common than on the streets of Rome, where they were few and far between. Many people wore gloves, including makeshift solutions such as dishwashing gloves. But except for the odd person, who glared daggers at anyone who came close, the one-metre rule was forgotten.

In the days leading up to this, the lockdown in northern Italy over the coronavirus was a looming presence, but not one big enough to stop the rhythms of Roman life.

Although tourist numbers were down – and photographers could manage to frame shots that showed eerily quiet public spaces – the capital was far from a ghost town. Patrons, both Italian-speaking and not, sat drinking wine in the Piazza della Rotonda, adjacent to the Pantheon. Visitors still gathered at Trevi Fountain, overseen by police who whistled imperiously if anyone made the mistake of sitting on the edge of the monument. Transit kept running, stores were open and the more popular restaurants still bustled.

Amid increasing concern over the virus, the dominoes fell one by one. Mid Sunday morning, the government closed all cultural venues. It was a sudden move, done so abruptly that the gates to the Colosseum were shut after some people had already entered, while others milled about in confusion outside.

Later that day we met a Scottish couple, visiting for an extra-long weekend to celebrate his birthday. The audience they’d arranged with the Pope – the two of them in a crowd of about 80 people – had been cancelled, they said ruefully. The Vatican catacombs had earlier been closed and its museums then caught up in the broader shutdown of major venues.

By Monday, about the only open sites were the city’s many churches. But street life continued and the sunny patios of the Trastevere neighbourhood were well patronized by locals. Late that afternoon came the jarring imposition of the one-metre rule that people could no long be close together.

Some stores promptly laid down tape on the floor, marking out the safe intervals. Other establishments were more blasé, at least at first, but the message was clear: a public social life was no longer safe, with police reportedly patrolling to ensure compliance.

By the time the government followed up the one-metre rule with a full lockdown, late Monday night, our reasons to stay were evaporating. It wasn’t necessarily about health risk: Known coronavirus cases in Italy remain heavily overrepresented in the north. It was about the viability of life as a visitor, practical things such as where we would eat. Restaurants were closing – would runs on foodstuff come next? And if we didn’t leave now, would we be able to get out later? Would other countries start shutting their borders?

We opted to go. It was a sad moment, abandoning a beautiful city in its worst crisis in years. The general manager at our hotel – where there appeared to be few other guests by the end – put a brave face on the situation, but an enormous number of people rely on the tourist trade. If this is still an issue as Rome enters its peak visitor season, the financial impact will be immense.

The airport was a surreal sort of exodus. The risk wasn’t an invading army, with the sound of shells heralding its approach. The danger here was invisible and could already be close at hand. The very act of fleeing might bring us into contact with those who would put us at risk.

However, airlines cannot, practically, enforce a one-metre rule. The Airbus A321 we were on was larger than the plane Lufthansa had initially planned for this Rome to Frankfurt route, and still almost every seat was taken. To give all passengers more space would require a vast increase in flights. And the trend is going the other way, with Air Canada and other airlines announcing that they would suspend all service to and from Rome.

People on our plane instead relied on their own ad hoc measures: paper masks, bandanas, turtlenecks pulled high, blankets worn as a shroud. The flight crew were clad in more sturdy protection, latex gloves and masks fitted with valves, but the one serving us shook her head when asked if she was getting danger pay.

Our flight’s passengers showed no evidence of panic, but nor was there any groundswell of humanity and concern for strangers. We had quickly reverted to standard, slightly grumpy, travel behaviour. A person trying to sidle his way into a lineup was snapped at by another and there were the usual low-key squabbles over space in the luggage bins.

A reminder of the situation came in the form of a paper we had to fill in with our contact information. This, presumably to help public health authorities find us in the event a nearby passenger subsequently tests positive for COVID-19, we handed it in before disembarking. But then, from Frankfurt on, the trip was business as usual.

Crew members on the flight to Toronto were not in masks, and few passengers were as well. By the time we landed, the only official concern was whether we’d been to either Iran or China’s Hubei province. No one cared that we were coming from Italy, not the automated customs machine nor the three officials checking our paperwork as we headed out of the terminal toward a late-night transit ride downtown.

COVID-19 and travel: What you need to know

What should you consider before travelling, or staying put?

Why insurers are excluding coronavirus from their travel cancellation terms

Where is the coronavirus now? 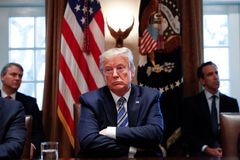 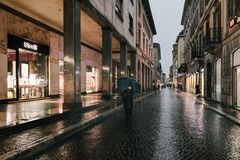 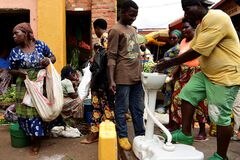