Afghanistan declared a national day of mourning on Tuesday to honour the 22 people killed in a horrific attack a day earlier on Kabul University, which was claimed by the Islamic State group. Most of those killed were students and another 27 people were wounded, some of them critically.

The brutal, hours-long assault on Monday was the second attack on an educational institution in the Afghan capital in as many weeks amid a soaring rise in violence and chaos across the country, even as the Taliban and government negotiators hold peace talks in the Gulf Arab state of Qatar.

The Islamic State affiliate also claimed the earlier attack, on Oct. 24, that killed 24 students at a tutoring centre in Kabul’s mostly Shiite neighbourhood of Dasht-e-Barchi. The militant group has declared war on the country’s minority Shiites and has claimed a number of vicious attacks since emerging in eastern Afghanistan in 2014.

Outside Kabul University, a small group of demonstrators gathered on Tuesday, demanding a ceasefire and urging the government to withdraw from the negotiations with the Taliban until a permanent end to hostilities is declared. Some held signs reading “why are you killing us?”

Mohammad Rahed, a policy and public administration student killed in the attack, posted a video to social media just days before the assault, where he urged people to live each moment and to “live with a smile.” The video was widely shared after the attack.

His father told local media his son wanted to be president of Afghanistan and “honestly serve my people.”

Meanwhile, President Ashraf Ghani warned that the perpetrators would be pursued.

“We will not remain silent. We will take the revenge,” he said in a video message Tuesday. “Our brave forces are after you everywhere and they will eliminate you.”

The assault on the university was condemned by the United Nations and the Organization of Islamic Cooperation. Human rights groups have expressed their outrage and Torek Farhadi, a political commentator in Kabul and former government adviser, called for a “transparent investigation” into security in the Afghan capital to determine how heavily armed gunmen gained access to the country’s largest educational institution.

The government’s lead negotiator in peace talks, Mohammad Masoom Stanekzai, called for an immediate ceasefire announcement from the Taliban.

The Taliban, which condemned the attack on the university and denied involvement within hours of its start, have refused to declare a ceasefire, saying it would be part of the negotiations.

But if not a ceasefire, then a significant reduction in violence has taken on increasing importance as Washington’s peace envoy Zalmay Khalilzad on Monday made a surprise visit to Pakistan, calling on Islamabad to urge the insurgent movement to reduce violence.

Pakistan has been critical in pushing Taliban into talks. Even as the Taliban, ousted by the U.S.-led coalition in 2001, maintain their political office in Doha, where talks are being held, their leadership councils are located in Pakistan.

Khalilzad brokered a peace pact with the Taliban that the U.S. signed in February and that was seen at the time as Afghanistan’s best chance at peace after more than 40 years of war. That deal, which is to allow U.S. and NATO troops to withdraw from Afghanistan after 19 years, also paved the way for the ongoing peace talks between the Taliban and the Afghan government.

In a series of tweets Tuesday, Khalilzad condemned the university assault but also warned that “this barbaric attack is NOT an opportunity for the government and the Taliban to score points against each other. There is a common enemy here.”

Family members of the victims mourned their loved ones on local TV and called for the government to investigate security lapses. 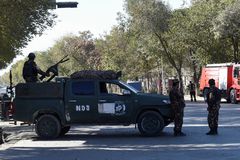 U.S. air strike kills five Taliban fighters in central Afghanistan, official says
October 26, 2020
At least four civilians killed by rocket fire in northern Afghanistan
October 22, 2020
Report an error
Due to technical reasons, we have temporarily removed commenting from our articles. We hope to have this fixed soon. Thank you for your patience. If you are looking to give feedback on our new site, please send it along to feedback@globeandmail.com. If you want to write a letter to the editor, please forward to letters@globeandmail.com.
Comments