Two suicide bombers and gunmen attacked crowds of Afghans flocking to Kabul’s airport Thursday, transforming a scene of desperation into one of horror in the waning days of an airlift for those fleeing the Taliban takeover. The attacks killed at least 72 Afghans and 13 U.S. troops, Afghan and U.S. officials said.

The U.S. general overseeing the evacuation said the attacks would not stop the United States from evacuating Americans and others, and flights out were continuing. General Frank McKenzie, head of U.S. Central Command, said there was a large amount of security at the airport, and alternate routes were being used to get evacuees in. About 5,000 people were awaiting flights on the airfield, Gen. McKenzie said.

The blasts came hours after Western officials warned of a major attack, urging people to leave the airport. But that advice went largely unheeded by Afghans desperate to escape the country in the last few days of an American-led evacuation before the U.S. officially ends its 20-year presence on Aug. 31.

The Islamic State group claimed responsibility for the killings on its Amaq news channel. The IS affiliate in Afghanistan is far more radical than the Taliban, who recently took control of the country in a lightning blitz. The Taliban were not believed to have been involved in the attacks and condemned the blasts.

Video provided to The Globe appears to show two explosions near Kabul airport that have killed at least 13 people. The video was reportedly shot by someone in the city who shared it with Green Party candidate and veteran Amanda Moddejonge.

In an emotional speech from the White House, U.S. President Joe Biden said the latest bloodshed would not drive the U.S. out of Afghanistan earlier than scheduled, and that he had instructed the U.S. military to develop plans to strike IS.

One of the bombers struck people standing knee-deep in a waste water canal under the sweltering sun, throwing bodies into the fetid water. Those who moments earlier had hoped to get on flights out could be seen carrying the wounded to ambulances in a daze, their own clothes darkened with blood.

Opinion: Biden keeps digging himself a hole on Afghanistan

Emergency, an Italian charity that operates hospitals in Afghanistan, said it had received at least 60 patients wounded in the airport attack, in addition to 10 who were dead when they arrived.

“Surgeons will be working into the night,” said Marco Puntin, the charity’s manager in Afghanistan. The wounded overflowed the triage zone into the physiotherapy area and more beds were being added, he said.

The Afghan official who confirmed the overall Afghan toll spoke on condition of anonymity because he was not authorized to brief media.

Pentagon spokesman John Kirby said one explosion was near an airport entrance and another was a short distance away by a hotel. Gen. McKenzie said clearly some failure at the airport allowed a suicide bomber to get so close to the gate.

He said the Taliban has been screening people outside the gates, though there was no indication that the Taliban deliberately allowed Thursday’s attacks to happen. He said the U.S. has asked Taliban commanders to tighten security around the airport’s perimeter. 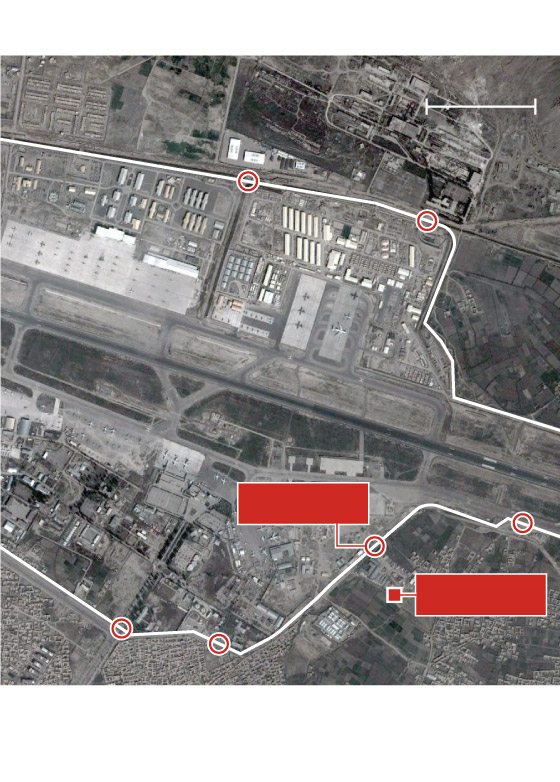 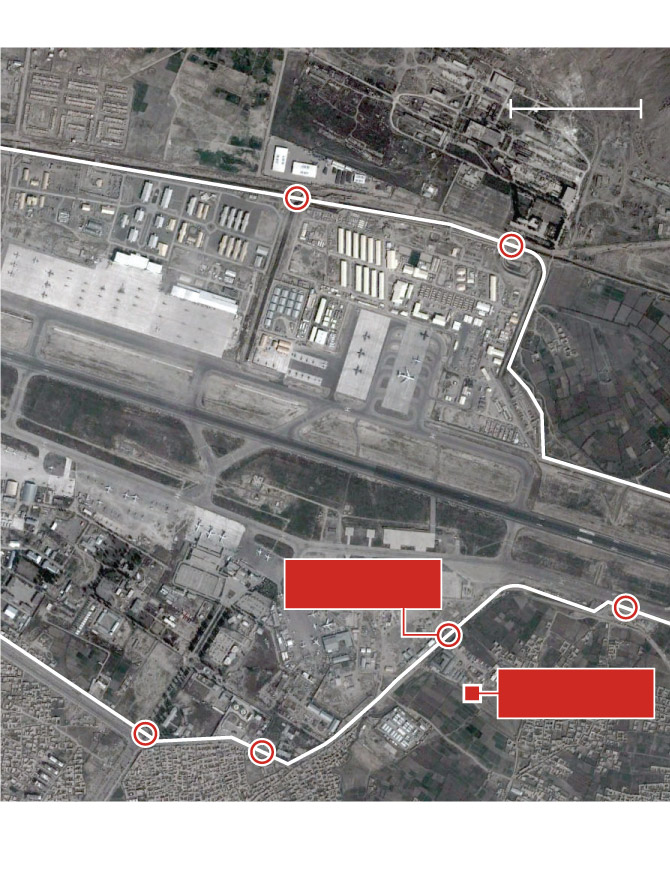 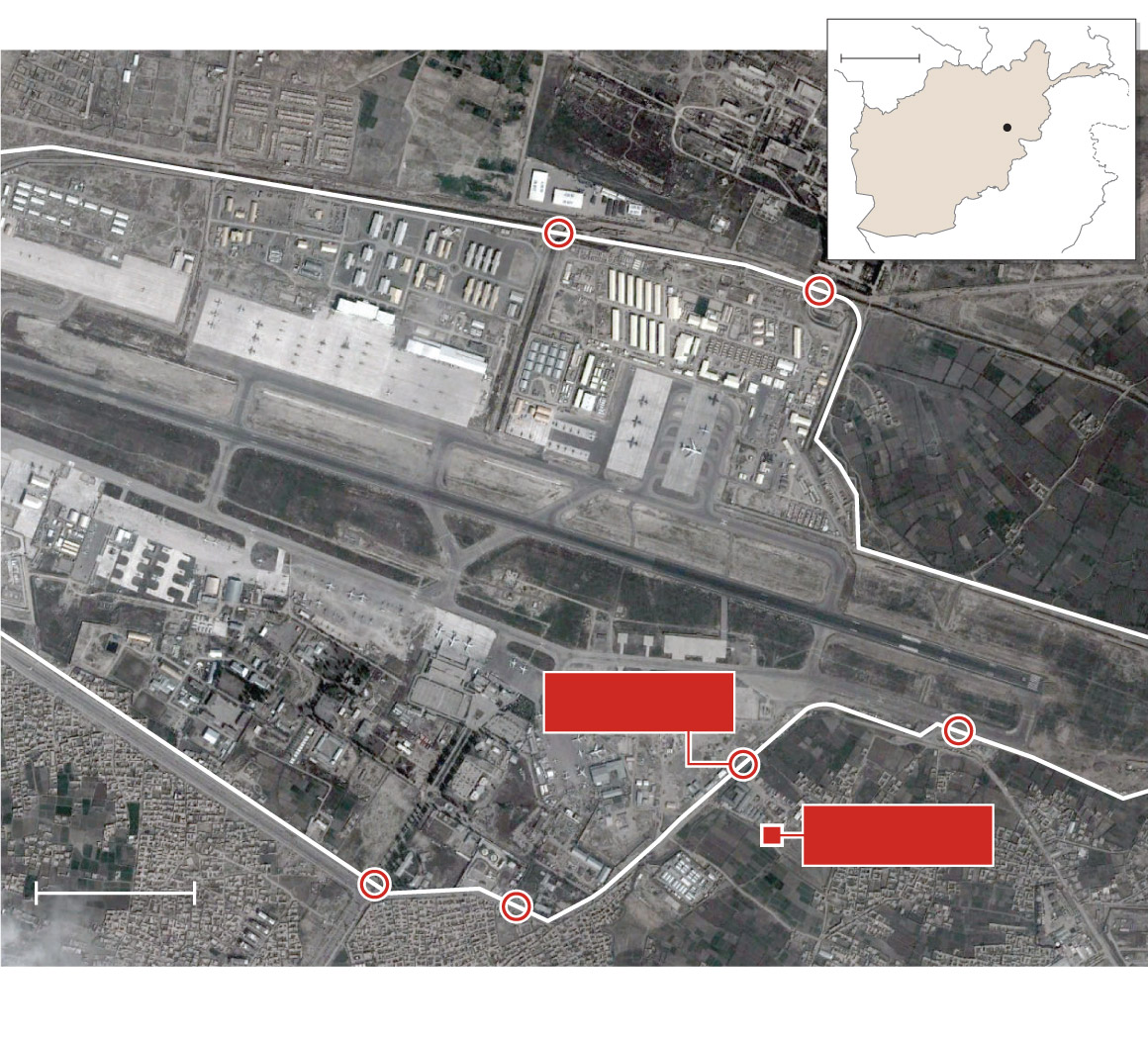 Adam Khan was waiting nearby when he saw the first explosion outside what’s known as the Abbey gate. He said several people appeared to have been killed or wounded, including some who were maimed.

The second blast was at or near Baron Hotel, where many people, including Afghans, Britons and Americans, were told to gather in recent days before heading to the airport for evacuation. Additional explosions could be heard later, but Taliban spokesman Zabihullah Mujahid said some blasts were carried out by U.S. forces to destroy their equipment.

A former Royal Marine who runs an animal shelter in Afghanistan says he and his staff were caught up in the aftermath of the blast near the airport.

“All of a sudden we heard gunshots and our vehicle was targeted, had our driver not turned around he would have been shot in the head by a man with an AK-47,” Paul “Pen” Farthing told Britain’s Press Association news agency.

Mr. Farthing is trying to get staff of his Nowzad charity out of Afghanistan, along with the group’s rescued animals.

He is among thousands trying to flee. Over the past week, the airport has been the scene of some of the most searing images of the chaotic end of America’s longest war and the Taliban’s takeover, as flight after flight took off carrying those who fear a return to the militants’ brutal rule. When the Taliban were last in power, they confined women largely to their home and widely imposed draconian restrictions.

Already, some countries have ended their evacuations and begun to withdraw their soldiers and diplomats, signalling the beginning of the end of one of history’s largest airlifts. The Taliban have insisted foreign troops must be out by the U.S.’s self-imposed deadline of Aug. 31 – and the evacuations must end then, too.

In Washington, Mr. Biden spent much of the morning in the secure White House Situation Room where he was briefed on the explosions and conferred with his national security team and commanders on the ground in Kabul.

Overnight, warnings emerged from Western capitals about a threat from IS, which has seen its ranks boosted by the Taliban’s freeing of prisoners during its advance through Afghanistan.

Shortly before the attack, the acting U.S. ambassador to Kabul, Ross Wilson, said the security threat at the Kabul airport overnight was “clearly regarded as credible, as imminent, as compelling.” But in an interview with ABC News, he would not give details.

Late Wednesday, the U.S. Embassy warned citizens at three airport gates to leave immediately owing to an unspecified security threat. Australia, Britain and New Zealand also advised their citizens Thursday not to go to the airport.

Taliban spokesman Zabihullah Mujahid denied that any attack was imminent at the airport, where the group’s fighters have deployed and occasionally used heavy-handed tactics to control the crowds. After the attack, he appeared to shirk blame, noting the airport is controlled by U.S. troops.

Before the blast, the Taliban sprayed a water cannon at those gathered at one airport gate to try to drive the crowd away, as someone launched tear gas canisters elsewhere.

Nadia Sadat, a 27-year-old Afghan, carried her two-year-old daughter with her outside the airport. She and her husband, who had worked with coalition forces, missed a call from a number they believed was the State Department and were trying to get into the airport without any luck. Her husband had pressed ahead in the crowd to try to get them inside.

“We have to find a way to evacuate because our lives are in danger,” Ms. Sadat said. “My husband received several threatening messages from unknown sources. We have no chance except escaping.”

Aman Karimi, 50, escorted his daughter and her family to the airport, fearful the Taliban would target her because of her husband’s work with NATO.

“The Taliban have already begun seeking those who have worked with NATO,” he said. “They are looking for them house-by-house at night.”

The Sunni extremists of IS, with links to the group’s more well-known affiliate in Syria and Iraq, have carried out a series of brutal attacks, mainly targeting Afghanistan’s Shiite Muslim minority, including a 2020 assault on a maternity hospital in Kabul in which they killed women and infants.

The Taliban have fought against Islamic State militants in Afghanistan, where the Taliban have wrested back control nearly 20 years after they were ousted in a U.S.-led invasion. The Americans went in after the 9/11 attacks, which al-Qaeda orchestrated while being sheltered by the group.

Amid the warnings and the pending American withdrawal, Canada ended its evacuations, and European nations halted or prepared to stop their own operations.

The Taliban have said they’ll allow Afghans to leave by commercial flights after the deadline next week, but it remains unclear which airlines would return to an airport controlled by the militants. Turkish presidential spokesman Ibrahim Kalin said talks were under way between his country and the Taliban about allowing Turkish civilian experts to help run the facility.