African officials objected Thursday to the global jostling to obtain medical equipment to combat the coronavirus, warning that if COVID-19 is left to spread on the continent the world will remain at risk.

“We cannot be neglected in this effort,” the head of the Africa Centers for Disease Control and Prevention, John Nkengasong, told reporters. “The world will be terribly unsafe, and it will be completely naive, if countries think they can control COVID-19 in their countries but not in Africa.”

South Africa acknowledged the challenges as it extended its lockdown by two weeks, with President Cyril Ramaphosa saying, “This is a matter of survival, and we dare not fail.”

Equipment in Africa is scarce. The World Health Organization says fewer than 5,000 intensive care unit beds are available across 43 of the continent’s 54 countries: “This is about 5 beds per 1 million people in the reported countries compared to 4,000 beds per 1 million people in Europe.” Functional ventilators in public health services across 41 countries number fewer than 2,000, a severe shortage for patients in respiratory distress.

While Africa’s 1.3 billion people had a head start in preparing for the pandemic as the virus spread in China, Europe and the United States, Mr. Nkengasong warned that “the very future of the continent will depend on how this matter is handled” as cases, now over 11,000, quickly rise.

“The worst is still to come,” he said, and pointed to the global Spanish flu pandemic of a century ago when cases came in waves.

Africa is also competing with the developing world for testing kits that will help give a clear number of cases, as well as protective equipment that front-line health workers desperately require. Already, anxious workers have gone on strike or gone to court in places like Zimbabwe over the lack of gear.

“We may not actually know how big is the size of the problem” without scaling up testing, Mr. Nkengasong said.

While 48 of Africa’s 54 countries now have testing capability, that often is limited to countries’ capitals or other major cities, WHO officials told reporters in a separate briefing.

There is an “urgent need” to expand testing, the WHO Africa chief, Matshidiso Moeti, said, noting that clusters of community transmission have emerged in at least 16 countries. That means the virus has begun spreading beyond the initial cases imported from abroad.

Even if testing kits and other equipment are found, another challenge is delivering them amid the thicket of travel restrictions. Cargo space is rare because many airlines have stopped flights to African destinations, Mr. Yao said.

Close to 20 African countries have closed their borders, and several are now under lockdown to try to prevent the virus’s spread. Now millions of people are bracing for lockdown extensions after regional leader South Africa’s announcement Thursday night.

If the country’s lockdown ends too soon or too abruptly, “we risk a massive and uncontrollable resurgence of the disease,” Mr. Ramaphosa said.

South Africa has the most confirmed cases in Africa with more than 1,900. “We are only at the beginning of a monumental struggle,” Mr. Ramaphosa says. “We cannot relax and we cannot be complacent.”

The economic toll, however, has been harsh. The World Bank in a new report said sub-Saharan Africa is expected to fall into recession for the first time in a quarter-century. Growth should fall this year from 2.4 per cent to minus 2.1 per cent, with countries that depend heavily on oil exports and mining hit especially hard.

Africa has had some of the world’s fastest-growing economies. The World Bank said African countries will require a “debt service standstill” and other financial assistance as millions of people, many who survive day-to-day, can’t go out to work.

“I am aware that some of you have been saying, `We would rather die from COVID-19 than from hunger,” Zambia’s President Edgar Lungu told the nation Thursday. “But I advise you to choose life. Please choose life.”

And, joining a growing number of African nations, he encouraged all Zambians to wear face masks at all times.

In Uganda, 75-year-old President Yoweri Museveni tried to boost morale after outdoor exercise was banned, releasing a homemade video of him running laps barefoot in his office and doing 30 push-ups – proof, he said, that one can stay fit indoors. 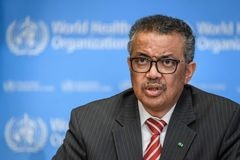 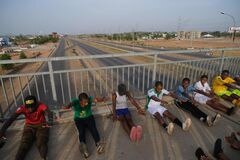 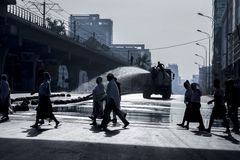