Health officials are making a dramatic revision of their pandemic assessment in Africa after a new analysis found that 85 per cent of the continent’s COVID-19 infections are going undetected, largely because of a severe lack of testing.

Officially, 8.4 million cases of the virus have been recorded in Africa. But in reality, there have been 59 million infections across the continent, according to the revised data released Thursday by the World Health Organization.

The new data challenge the common myth that Africa has been relatively unscathed in the pandemic. While Africa’s young population has helped it to avoid a high death rate during the pandemic, the total number of infections has been much worse than most people realized.

The drastic undercounting is primarily because of a lack of testing. Only 70 million tests have been conducted among Africa’s 1.3 billion people so far – a small fraction of the 550 million tests administered in the United States, which has only a third of Africa’s population.

“With limited testing, we’re still flying blind in far too many communities in Africa,” WHO Africa director Matshidiso Moeti told a briefing on Thursday.

“Most tests are carried out on people with symptoms, but much of the transmission is driven by asymptomatic people, so the reported cases we see could just be the tip of the iceberg,” she said. “In Africa, with our low vaccination rate, it’s vitally important to have a better grasp of where and how the virus is circulating in our communities.”

The revised African estimates are the latest evidence that the impact of the pandemic has been vastly undercounted in many parts of the world.

In India, for example, recent studies have concluded that only 10 per cent of COVID-19 deaths have been officially reported. In South Africa, estimates of excess deaths have suggested that the true number of deaths is three times more than the official count. In Peru, a revised analysis led to a tripling of the official death count.

To tackle the testing problem, the WHO is launching a pilot program to expand the level of community screening in eight African countries, using rapid diagnostic testing that can produce results within 15 minutes.

This, in turn, would decentralize the health response to the pandemic, allowing the early detection of surges of cases, so that communities can quickly take local steps such as cancelling crowded gatherings without waiting for national government action.

It would also allow faster contact-tracing around each infected person, so that the spread of the virus can be disrupted and wider outbreaks can be prevented.

Rapid testing and contact-tracing are particularly important in Africa because of the severe shortage of vaccines in the region. Only 5 per cent of its population is fully vaccinated. Half of African countries have fully vaccinated 2 per cent or less of their people.

Health officials are hoping that the rapid testing will produce a 40-per-cent increase in testing capacity in the eight African countries, reaching seven million people over the next year.

With many African countries suffering a “pandemic fatigue” that has dampened the level of mask-wearing and physical distancing, and with a fourth wave of COVID-19 cases now expected to hit many African countries around the holiday season in December, the expanded testing campaign could be crucial in helping those countries to cope with the likely surge.

So far, most African countries have focused on testing those who arrive at hospitals or clinics with symptoms of the virus. This has led to “large-scale underreporting,” the WHO says.

More than one-third of African countries have failed to reach the WHO’s recommended benchmark of performing 10 tests per 10,000 people weekly.

The problem is worsened by the huge number of asymptomatic cases in Africa. In an estimated 65 per cent to 85 per cent of African COVID-19 cases, there are few or no symptoms – far higher than the percentage in North America or Europe.

The high rate of asymptomatic cases and the low death rate in Africa are believed to be largely a result of Africa’s relatively youthful and active population, although experts have debated other possible factors.

Because of the lack of symptoms, most Africans who become infected are unaware that they have the virus and never get tested – yet they play a key role in the transmission of the virus to vulnerable people who can become sick.

In the expanded testing campaign in the eight African countries, health officials will use the “ring strategy” that was pioneered during the eradication of smallpox and later adopted for Ebola vaccination in Africa. Under this strategy, everyone who lives within 100 metres of an infected person will be offered rapid testing. Those who test positive will be assessed for possible transfer to treatment centres.

Moderna pledges to build vaccine factory in Africa, but not in time for current crisis
Subscriber content
October 7, 2021 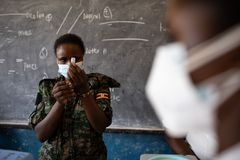 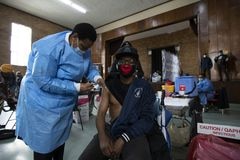 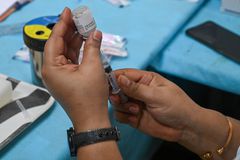