Coronavirus information
The Zero Canada Project provides resources to help you make the most of staying home.
Visit the hub
Vladimir Isachenkov
Moscow
The Associated Press
Published May 29, 2020 Updated May 29, 2020
Comments
Please log in to listen to this story. Also available in French and Mandarin. Log In Create Free Account

The Russian government on Friday presented more detailed mortality figures for last month that include more deaths linked with the coronavirus, in a bid to dispel suspicions from some Russian and Western experts that authorities were trying to lower the toll for political reasons.

But officials also defended the way they register deaths, which only includes people confirmed to have died of COVID-19, and not those who succumbed to other causes – even if they also tested positive for the virus.

Deputy Prime Minister Tatyana Golikova said that 1,675 people died of COVID-19 in April. Of that number, 1,136 deaths were directly caused by confirmed COVID-19, while the remaining 539 tested negative but most likely died of the virus. In addition to that, she said, 1,038 others tested positive for the virus but died of other causes.

If all three categories are counted as COVID-19 deaths, the nation’s total toll for April would stand at 2,713 or nearly 60% more than the previously announced number.

The country’s current total is 4,374 deaths, about 1% of registered infections. Those are deaths directly resulting from the virus, and some experts questioned the government’s figures, pointing at a significant increase in April mortality in Moscow and St. Petersburg compared to a year earlier. Moscow health officials also released broader coronavirus statistics on Thursday that showed more deaths of those who tested positive but died of other reasons.

Even with those extra deaths, Russia’s coronavirus mortality rate still looks markedly lower than in many European countries and the United States. Experts point to a combination of reasons, including the nation’s vast, sparsely populated territory, less frequent travel and lower social mobility.

Alexei Raksha, an independent demographer who analyzes government statistics, said Russians have a much lower average life expectancy compared to people in the West, so the older generation that the virus hit hardest in Europe simply isn’t there. Russians also have lower incomes and don’t have a habit of socializing in public places – such as co-working spaces, widespread in New York, and restaurants.

Russia has the world’s third-largest coronavirus caseload of more than 387,000 cases, following the U.S. and Brazil, and the strikingly low mortality rate has drawn suspicions that officials could have manipulated numbers to paint a more positive picture for political ends.

Golikova defended the Russian approach to counting coronavirus deaths, saying that it’s more precise than in other countries and based squarely on the World Health Organization’s guidance.

She emphasized that autopsies are conducted for practically all of those who died after testing positive for the virus or were suspected of having the infection, to determine the primary cause of death. In cases when COVID-19 isn’t considered the main cause, it’s always mentioned as the underlying illness.

Golikova noted that the nationwide lockdown has slowed down that work and in some of the April cases autopsies are yet to be conducted to determine the primary cause of death with full certainty.

Earlier this month, Russian President Vladimir Putin ordered the lifting of the nationwide economic shutdown that was put in place in late March and encouraged regional governors to gradually lift restrictions. He announced this week that a postponed Victory Day parade in Red Square that was set for May 9 to mark the 75th anniversary of Germany’s surrender in World War II will take place on June 24.

Police detain 25 people in Russia for protesting journalist’s arrest
May 29, 2020 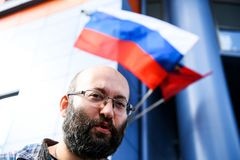 Coronavirus outbreak in Russia has begun to stabilize, Putin says
May 22, 2020 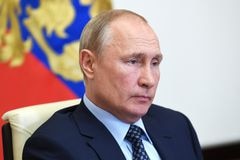