In the early weeks of the pandemic, South African President Cyril Ramaphosa won praise for his swift lockdown decision. The country rallied around him, while the World Health Organization lauded his government for its “incredible” performance on testing.

But today the praise and solidarity have sharply eroded. With the economy imploding and COVID-19 cases soaring to one of the highest levels in the world, many South Africans are voicing outrage at Mr. Ramaphosa’s increasingly contradictory regulations – and the growing evidence that well-connected insiders are grabbing a big slice of his government’s pandemic-related spending.

Corruption scandals have sparked such an uproar that Mr. Ramaphosa has felt obliged to denounce the perpetrators, including his own colleagues in government.

“Attempting to profit from a disaster that is claiming the lives of our people every day is the action of scavengers,” he said this week.

“It is like a pack of hyenas circling wounded prey. … Corruption during a national disaster is a particularly heinous type of crime, and perpetrators are going to be dealt with decisively and harshly.”

His government has been left reeling by revelations of insider deals on pandemic contracts – including a $10-million personal protective equipment deal that benefited family members of a top presidential spokesperson, Khusela Diko, and the most senior health official in the country’s biggest province, Bandile Masuku.

Both officials have taken leaves of absence while the contract is reviewed, but dozens of other potentially corrupt deals are also being investigated, including contracts for medical supplies and food parcels.

Critics are calling it a “plundemic” by a coterie of “Covidpreneurs” – the new nickname for business people who enjoy profitable government connections. The insider deals are particularly galling to South Africans at a time when unemployment has reached record levels and the economy is forecast to plummet more than 8 per cent this year.

Mr. Ramaphosa’s party, the African National Congress (ANC), said it was “deeply embarrassed” by the allegation that its own officials had illegally benefited from pandemic funds. “These developments cause us collectively to dip our heads in shame and to humble ourselves before the people,” the ANC national executive said Tuesday.

“We acknowledge the justifiable public outrage caused by the depravity and heartlessness displayed by some elements in government, our organization and the private sector. … The moral standing of the ANC has been severely damaged by the conduct of some of its members.”

But while it promised to take action against corruption, it was vague about the details, calling only for a review to bring “recommendations for action.”

Political commentator Justice Malala noted that since April Mr. Ramaphosa has made repeated vows to take “harsh” action against corruption in pandemic-related deals, yet the looting has continued. And the ruling party seemed to have forgotten its anti-corruption pledges last month when it announced plans to reinstate two ANC officials who were linked to the embezzlement of funds from a bank.

At the same time, Mr. Ramaphosa is under attack for some of his government’s announcements during the pandemic, including a ban on cigarette sales, the reopening of churches and casinos and a decision to permit the politically powerful minibus taxi industry to operate at 100-per-cent capacity. Health experts have said the rules are unscientific and irrational.

In the first weeks of the pandemic, Mr. Ramaphosa was praised for his calm and decisive tone in his televised speeches to the country, but now he is facing criticism for refusing to answer questions from the media. He has not held any formal news conferences since the beginning of the pandemic.

South Africa has the fifth-highest number of COVID-19 cases in the world, with more than 529,000 and almost 9,300 deaths reported as of Wednesday. Its testing program, once hailed by the WHO as a global leader, is now so limited that a quarter of daily tests are coming back positive, one of the highest rates in the world.

Hospitals in some regions, such as the province of Eastern Cape, have been reportedly close to collapse during the pandemic because of mismanagement, crumbling infrastructure, staff vacancies and oxygen shortages.

But it is the wave of corruption that has caused the most anger among South Africans. When he became President two years ago, Mr. Ramaphosa promised a “new dawn” after the corruption-plagued rule of former president Jacob Zuma. Instead, little has changed.

Few prosecutions have been launched, despite new revelations of corruption at an official inquiry, and Mr. Zuma himself has managed to keep stalling his own criminal trial on racketeering and fraud charges in connection with a weapons deal in 1999.

The Gupta brothers – the business partners of Mr. Zuma’s son and the central figures in South Africa’s biggest postapartheid corruption scandal – were allowed to flee to Dubai in 2018, where extradition is difficult.

According to a published report this week, only three South African officials have been jailed for corruption in the 26 years since the ANC took power. 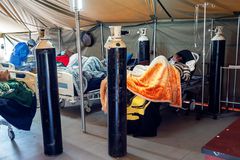 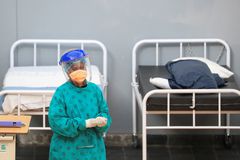