When the rocket hurtled out of the sky and exploded in their camp in the dense Sambisa Forest, the abducted Chibok schoolgirls had no advance warning. The blast triggered a wall of flames and shrapnel, killing at least 10 of the hostages and leaving many others with horrendous injuries.

Nigerian air force commanders swiftly denied any knowledge of the botched attack after early reports emerged in August, 2016, and the incident remained shrouded in mystery. But a new book gives a detailed account of the rocket strike – one of the most disastrous moments of the international military hunt for the abducted students who had become a global cause célèbre.

The rocket was fired from a Nigerian warplane, acting on surveillance images from Nigerian aircraft and sophisticated U.S. military drones, the book says. It was an attempt to target the hostage-takers from the radical Islamist militia known as Boko Haram. But instead it showed the dangers of the military-dominated operation that many countries, including Canada, had eagerly supported with equipment and personnel.

The deployment was mobilized after a storm of social-media outrage at Boko Haram’s kidnapping of the schoolgirls from Chibok in northeastern Nigeria in April, 2014. Western celebrities transformed the case into a global sensation, and politicians quickly responded by offering intelligence experts and high-tech hardware. But the campaign failed to rescue the hostages.

“At the height of the trillion-dollar War on Terrorism, with a vast global surveillance program at its disposal, America proved unable to track a group of high schoolers hidden under trees,” write Joe Parkinson and Drew Hinshaw in their book, Bring Back Our Girls: The Untold Story of the Global Search for Nigeria’s Missing Schoolgirls, which was published this month.

Canada’s role in the military hunt is still unclear. In May, 2014, the federal government promised to help the search for the schoolgirls by providing surveillance equipment and the technical expertise to operate it. Two years later, Ottawa described the Canadian mission as a small assessment team from May 12 to July 5, 2014, along with RCMP training in intelligence and investigations.

But the new book says Canadian diplomats joined other foreign delegations and police forces in studying U.S. drone footage in meetings at the residence of the U.S. ambassador in the Nigerian capital, Abuja.

In July, 2014, three months after the kidnapping, a U.S. surveillance camera generated a clear photo of about 80 young women under a tree, with a handful of men who seemed to be guarding them. It was considered the best clue to emerge from the military operation, almost certainly showing the hostages alive in an identifiable location.

Yet the photo never led to a rescue mission – partly because of tensions and mistrust between the Nigerian forces and the international mission, and partly because of the lack of Nigerian military infrastructure to support a risky mission in such a remote and impenetrable area.

By mid-2016, social-media attention had faded away from the Chibok students, but the military efforts continued and the aerial surveillance intensified.

The deadly rocket attack in August, 2016, was conducted by an Alpha fighter jet, a relatively cheap warplane supplied to Nigeria by a U.S. company, with a rocket launcher crudely welded onto it. Based on military surveillance, the target was believed to be the main Boko Haram headquarters, hidden under the thick canopy of the forest. Instead the rocket strike left at least 40 of the Chibok schoolgirls dead or wounded.

Boko Haram fighters used video of the botched attack for propaganda purposes. Nigerian commanders insisted that the video was a fake, arguing that the bodies were not sufficiently damaged to be genuine bomb victims. But the book, quoting the survivors, describes a scene of “blood everywhere” and victims with severe injuries, including one whose leg had to be amputated.

The dead schoolgirls were buried in unmarked mass graves, without any funeral, the book says. The rocket strike was largely ignored by the media and was never reported to senior White House officials nor included in daily briefings for then-president Barack Obama, despite the Boko Haram video of the dead students, the book said.

“On Twitter, where the conversation had long moved on, not a single celebrity expressed any sympathy for schoolgirls killed in an air campaign that had been fueled by the drones once encouraged into service by their tweets,” Mr. Parkinson and Mr. Hinshaw wrote.

In the end, the military operation failed. A quieter strategy of mediation and negotiations, led by Nigerian volunteers and a Swiss diplomat, was far more successful. The negotiations freed more than 100 of the Chibok students, in exchange for money and the release of several prisoners. 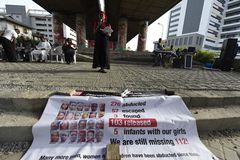 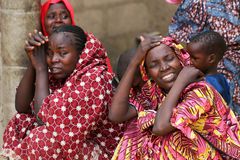 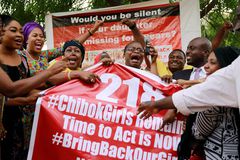