Algeria swore in Abdelmadjid Tebboune as president on Thursday as the Hirak protest movement debated its response to his offer of dialogue to end a months-long political crisis.

Hirak has mobilized huge street protests since February demanding a full clear-out of a shadowy, long entrenched ruling elite that it sees as corrupt and undemocratic, and the army’s withdrawal from politics.

Tebboune, a former prime minister who casts himself as a reformer, was elected last week in a vote the opposition regarded as a charade intended to keep the elite in power.

After taking the oath he said in a speech that consultations on a new constitution that he promised last week would start soon, and that it would limit presidents to two terms of office. He pledged to fight corruption and diversify the economy.

After his speech Tebboune embraced army chief Ahmed Gaed Salah, whom protesters have demanded step down, and awarded him a medal of merit.

The army saw the Dec. 12 vote as the best way to end 10 months of weekly mass protests that helped oust ex-president Abdelaziz Bouteflika in April after two decades in power, and restore a political order in which it holds sway.

Official figures showed an election turnout of 40 per cent as protests and strikes paralyzed some cities and towns in Algeria, a major oil and gas exporter, with Tebboune winning 58 per cent of votes.

State media presented even that low level of turnout as a victory, though with no outside observers monitoring the vote, many Hirak supporters regarded the figures as suspect.

“Tebboune is not my president. He doesn’t represent Hirak and has no legitimacy. Protests must go on until the people become the decision-makers,” said Slimane Hachoud, 24, who has been protesting since February.

Since the election, the weekly Friday and Tuesday protests have gone ahead as usual, though there were widespread reports of police arresting many demonstrators in the western city of Oran.

Within the leaderless protest movement, where debate over goals and strategy takes place on social media or during demonstrations, there were mixed reactions to the offer of dialogue and a new constitution that Tebboune made last week.

“We are not against dialogue and negotiations to end the crisis, but we cannot shake Tebboune’s hand if he doesn’t first free the detainees,” said Abdeljabar, a student protester.

Scores of protesters and opposition figures have been detained or jailed since the start of the protests in February on charges including “undermining national unity” and “weakening army morale.”

“Now that the generals have a civilian representative in the person of Abdelmadjid Tebboune, we must negotiate the transition to a rule of law with him,” said Lahouari Addi, a political science professor.

“Hirak must initiate and offer names with a list of demands,” Lies Merabet, a labour union leader, said on Facebook. 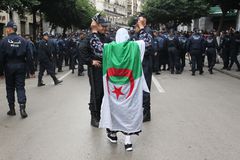