Police in Britain have confirmed that all of the 39 bodies found packed into the back of a truck east of London on Wednesday were Chinese nationals, as the investigation expanded into Northern Ireland.

The victims include 31 men and eight women. Police had originally thought that one of the women was a teenager, but on Thursday they said all are adults.

“Each of the 39 people must undergo a full coroner’s process to establish a cause of death before we move on to attempting to identify each individual within the trailer. This will be a substantial operation and, at this stage, we cannot estimate how long these procedures will take,” police said in a statement on Thursday.

A 25-year-old man from Northern Ireland, identified in media reports as Maurice Robinson, has been arrested on suspicion of murder. Police in Northern Ireland have raided three homes in County Armagh, where Mr. Robinson and his family lived, as part of the investigation. It’s not clear if Mr. Robinson knew there were people inside the trailer.

Police also began piecing together more details about the truck and the refrigerated trailer that contained the bodies. The truck was registered in Bulgaria by an owner in Ireland. It travelled from Dublin to the United Kingdom on Sunday, entering through the Holyhead port in Wales. The driver picked up the trailer at the Purfleet container port near Grays, east of London, at 12:30 a.m. on Wednesday. It left the port 35 minutes later and stopped in an industrial park in Grays. Police said they were called to the site at 1:40 a.m. by the ambulance service, which had responded to reports of the bodies.

The trailer is believed to have come to Purfleet from Zeebrugge in Belgium. Officials in Belgium have said the trailer arrived in Zeebrugge on Tuesday at 2:49 p.m. and left later that day. It’s not clear when the people were loaded inside. The trailer is owned by a company in Ireland, which had rented it out for a week.

“We will continue to work with partners and other law enforcement agencies to establish exactly how these 39 people lost their lives in such an untimely way,” the police said. “This process will be complex and lengthy, as well as incredibly challenging for all those involved, but we will not stop until we get answers for the loved ones of those who have sadly died.”

Councillor Paul Berry told the BBC that the village of Laurelvale in County Armagh, where the Robinson family lives, was in "complete shock.” He added that he had been in contact with Mr. Robinson’s father, who found out about his son’s arrest through social media. “The local community is hoping that he [Mr. Robinson] has been caught up innocently in this matter but that’s in the hands of Essex Police, and we will leave it in their professional hands to try to catch the perpetrators of this,” Mr. Berry said.

Richard Burnett, chief executive of the Road Haulage Association, which represents the U.K. freight industry, said the conditions inside the refrigerated trailer would have been horrible. “Even if it was chilled to minus 5 [Celsius] or if it was frozen at minus 25, that’s horrendous conditions,” he said in an interview on Wednesday. “The panic when those people knew that they couldn’t get out must have just been unimaginable.” 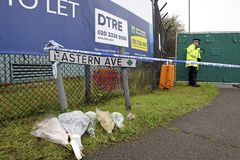 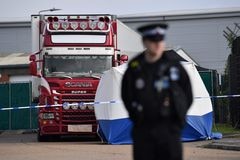 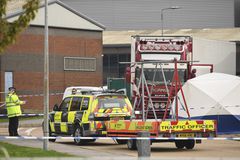