At 4 a.m. on Saturday, 12-year-old Joseph Soriano tumbled out of bed in the predawn darkness. He put on a baggy blue sweatshirt, black pants and brightly coloured sneakers, one purple, one pink. For breakfast, he ate a roll then rushed to get ready for the long bus ride from Connecticut to Washington. He downloaded episodes of The Office to watch on the drive and took out markers and glue to make a sign.

On a sheet of white poster paper, Joseph pasted a photo of his younger self, cherubic and eating a cup of ice cream five years ago. Next to it he placed a picture of a semi-automatic assault-style rifle. “Pick one,” he wrote in light-blue marker. In his young life, the consequences of such a choice were already real. In 2012, he was a first-grader at Sandy Hook Elementary School when a gunman killed 26 people, including his teacher and some of his classmates.

Joseph survived by hiding in a bathroom with a little girl. A police officer found them and carried them out, one on each shoulder, telling them not to open their eyes. Joseph did. The girl he considered his best friend was dead. So was the boy whose house he was supposed to go to that afternoon for a play date. His older sister, Sophia, was in third grade and ran out of the school holding a friend’s hand.

“I don’t want any kid, no matter what the age, to go through that ever again,” Joseph, now a sixth-grader, said as he headed south with his sister and mother to this weekend’s March for Our Lives in Washington. The rally, and more than 800 sister protests, drew hundreds of thousands of people across the United States and beyond to lobby for stricter firearms laws, as a growing movement among the country’s youth takes on the scourge of gun violence.

Joseph had heard about the march from a friend at school and knew immediately he wanted to go. He researched the event and told his mother, who remained apprehensive, that he had to be there. On the bus from Connecticut, he and Sophia, 13, spoke in an animated rush. “I’m so excited to have our words be spoken,” Joseph said. “To have our voices be everybody’s voices.”

I don’t want any kid, no matter what the age, to go through that ever again.

Joseph and Sophia are part of a generation of American students who are seizing this moment to tell their story and to pressure their elected officials for change. Some of them, in places such as Newtown, Conn., and in cities around the country, have first-hand or repeated encounters with gun violence. But all of them have grown up with lockdown drills – and with the awareness that school shootings are a remote but real possibility.

Whether America is ready to listen to this new youth movement, ignited by the survivors of last month’s mass shooting at Marjory Stoneman Douglas High School in Parkland, Fla., is an open question. When 400 people from the Newtown area boarded eight buses for Washington in the wee hours of Saturday morning, they carried hopes that the U.S. gun debate is at a tipping point. But they also know that they have held such hopes before, only to see a push for national action founder.

Demonstrations such as Saturday’s marches galvanize the people who participate in them. Their ultimate impact, however, depends on continued organizing and, most of all, on translating voices into votes. “The hard part is always momentum, but I feel these kids are not going to stop,” said Brenda Soriano, 48, Joseph and Sophia’s mother, who had never attended a protest in her life before Saturday. “If people don’t listen to them, we’re lost.”

When Joseph and Sophia climbed down the steps of the bus into Washington’s Judiciary Square a little more than two hours later, Ms. Soriano was nervous. She knew there would be crowds and confusion and hovered close to both children. After the shooting, she said, they felt afraid for a long time. They were hyper-vigilant, upset by loud noises or by being alone on a floor of their house. To their mother, the fact that both children wanted to be at Saturday’s march was encouraging, a sign that they were far stronger than in the past.

Joseph and Sophia were not the only kids from Newtown speaking out for the first time. Adrianna Butler, 12, also survived the shooting at Sandy Hook Elementary and came to the march with her mother and aunt. “It took five years, but my daughter said, ‘I think I’m ready to do this now,’” Liz Arrindell, Adrianna’s mother, said.

Adrianna made her own sign, which read: “I hid in the corner during my school shooting. What about you?”

The hard part is always momentum, but I feel these kids are not going to stop. If people don’t listen to them, we’re lost.

Throughout the day, the Newtown kids and parents spoke with fervent admiration about the Parkland students. Those students “broke a barrier that people weren’t able or willing to break, “ said Marian Mollin, a history professor at Virginia Tech University who studies social movements. They immediately responded “politically and outwardly” to a mass shooting.

Prof. Mollin noted the long tradition of young people, including high-school students, leading pushes for political change in the United States during the Civil Rights movement and the Vietnam War. Today’s students “just have to keep going,” she said. “If it ends here, then it’s nothing. They know that.”

At Saturday’s rally, the students vowed to continue their fight. But the prospects of enacting any significant restrictions on guns at the national level under the current Congress remain slim. Legislators passed a modest improvement to the background check system as part of last week’s spending package. Earlier this month, they also authorized new grants to schools for safety programs. But the measures the students are advocating – universal background checks to purchase firearms, a ban on assault weapons, a prohibition on high-capacity ammunition magazines – are not under serious consideration.

For groups devoted to preventing gun violence, the focus is now on November’s midterm elections and on turning out voters to support their agenda. “Ultimately, unless you kick some asses out of office, you’re not going to see a radical change,” said Tom Mauser, a long-time activist in Colorado whose son Daniel was killed at Columbine High School in 1999. “Some people have to pay a price for their votes.”

Mr. Mauser still remembers the Million Mom March in 2000, a demonstration in favour of gun restrictions, which drew hundreds of thousands of people to Washington and was even bigger than Saturday’s march. But after that display of strength, “the air kind of went out of our balloon,” Mr. Mauser said. For years, gun-control activists were outnumbered at legislative hearings by gun-rights advocates. That only began to change after the Newtown shooting in 2012.

Ultimately, unless you kick some asses out of office, you’re not going to see a radical change. Some people have to pay a price for their votes.

— Tom Mauser, a long-time activist in Colorado whose son Daniel was killed at Columbine High School in 1999.

“Everything you’re seeing now has been built in the last five years,” said David Stowe, a founder of the Newtown Action Alliance, the group that organized the buses to Washington. While no significant gun-control legislation has passed in Congress, there has been progress at the state level and a number of new grassroots organizations were formed – groups that are assisting and amplifying the student movement.

Even in Newtown, it was a struggle to keep students engaged in the gun debate before the Parkland shooting. Isabella Wakeman, 16, a junior at Newtown High School, said that this past fall, the junior arm of the Newtown Action Alliance was only attracting a handful of students to its meetings. Then came the shooting in February and the school walkouts earlier this month – and suddenly the group had more than 100 students coming to its meetings. Roughly 200 of them came to Washington. Their next meeting is Monday after school, said Isabella, where they will discuss next steps.

Apologies for a generation

As the rally began, the Sorianos made their way toward Pennsylvania Avenue under a nearly cloudless sky. They moved slowly through thick crowds before settling in a spot near the National Archives. They were joined by nine more people from Newtown, including three other students who survived the shooting at Sandy Hook. Some fellow protesters, seeing their signs and T-shirts, stopped to thank them or to offer hugs and words of support.

Organizers estimated the crowd at 800,000 people while outside experts put the figure at around 200,000. In the throngs, Ms. Arindell and her daughter Adrianna became separated from the larger Newtown group and met people from all over the country. An older man, seeing Adrianna’s sign identifying her as a survivor of a school shooting, approached her and asked to shake her hand. “I want to apologize for my generation,” he said. “We’re working on fixing things.” Adrianna, speechless and surprised, simply said “Thank you.”

Joseph and Sophia held their signs high, even when their arms began to hurt. They stood transfixed as Matthew Soto, the brother of Victoria Soto, a Grade 1 teacher killed at Sandy Hook Elementary, and later two Newtown high schoolers took to the stage. One of the Newtown survivors, now a high-school freshman who declined to give her name, wept as their story and their town became part of a national moment.

Emma Gonzalez, a Parkland student, was the final speaker. She talked about the victims at her school and what each would never do again. Then she stood silently before a sea of people as six minutes passed, the length of the Florida shooter’s rampage. In the hush, Ms. Soriano was reliving in her mind that day in 2012, second by second, thinking of Joseph. Now, he’s running away, she thought. Now, he’s in the bathroom. Tears rolled down her cheeks and she pulled her children close.

Back on board the bus rolling north to Connecticut, the Sorianos were tired and exhilarated and hopeful. “I am amazed at how these kids got up and spoke and were so raw and real and emotional,” Ms. Soriano said. “If people don’t hear them, then something is wrong with this country.”

Sophia swore she would never throw away the sign she had carried at the march. “I’ve never experienced anything like that,” she said. “It was really empowering. I said what I needed to say.” Asked which part of the day he liked best, Joseph just grinned. “Everything,” he said. 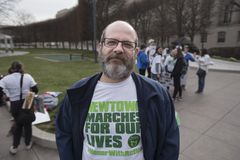 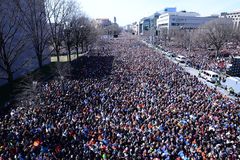