Do people who go by Dr. need to carry stethoscopes?

One writer in The Wall Street Journal seems to think so, at least when it comes to Jill Biden, who has a doctorate in education and calls herself Dr. Jill Biden.

In an opinion piece published online Friday, the author, Joseph Epstein, addressed the president-elect’s wife as “kiddo” and offered her advice on “what may seem like a small but I think is a not unimportant matter.”

“Any chance you might drop the ‘Dr.’ before your name?” he wrote. “‘Dr. Jill Biden’ sounds and feels fraudulent, not to say a touch comic.”

If the reaction from Dr. Biden’s spokesperson and from legions of women in academia is any indication, the answer is: not a chance.

“If you have a doctorate in pharmacy or education or biology, it doesn’t matter: Call yourself a doctor,” said Sarah H. Parcak, a professor of anthropology at the University of Alabama at Birmingham, who has a Ph.D. in archaeology from Cambridge University. “You worked your rear end off for years to earn that. Shout it from the rooftops, if you want to. It’s your right.”

Parcak, along with many others, said the suggestion that Biden not use the honorific was blatantly sexist and emblematic of the way many men question or disparage women’s credentials.

“Some men are so threatened by educated women,” said Audrey Truschke, an associate professor of South Asian history at Rutgers University, who called Epstein’s piece a “misogynist, self-absorbed screed.” On Saturday, she was among a number of women who added Dr. to their names on Twitter in solidarity with Biden.

Michael LaRosa, a spokesperson for Biden, called Epstein’s piece a “disgusting and sexist attack” and urged The Journal to remove it and apologize to Biden. Epstein declined to comment for this article. The Journal did not immediately respond to a request for comment Saturday evening.

The raw nerve touched by the piece underscored the enduring power of the title – two letters that convey accomplishment, respect and authority.

In the 19th century, the title was widely contested, and people were sued for using “doctor” on calling cards or advertisements if they hadn’t graduated from a recognized medical school, according to Naomi Rogers, a professor of the history of medicine at Yale University.

When women began graduating from medical schools in the middle of the 19th century, they called themselves doctors, she said. But newspapers and critics gave them a more dismissive title – doctoress – indicating that they were women.

“‘Doctor’ came to be prized as a unisex honorific,” Rogers said. “That was the word that women M.D.s sought.”

Rogers, who has a doctorate in history, doesn’t often use the title Dr. herself, she said, but understands why others with the degree would.

“I’ve certainly encountered a number of doctors in my professional life who are uncomfortable using the honorific term Dr. for anyone who doesn’t have an M.D.,” she said. “But I would call that an old-fashioned view. I don’t say this out loud to any of them, but I think: Which of us studied for longer?”

Judith Martin, better known as the columnist Miss Manners, said her father, who had a doctorate in economics, insisted on not being called Dr. and implored his fiancée, Martin’s mother, to print new wedding invitations after the first version included the title.

“As my father used to say, ‘I’m not the kind of doctor who does anybody any good,’” Martin said in an interview Saturday. “He didn’t feel it was dignified. I am well aware that this is a form of reverse snobbery.”

Still, Martin said, “I don’t tell people what to call themselves and I’m aware that women often have trouble with people who don’t respect their credentials.”

(The New York Times’ house style allows for anyone with an earned doctorate, such as a ✓Ph.D. or ✓Ed.D., to be identified by the title on subsequent references, provided it is “germane to the holder’s primary current occupation.” Associated Press style, which is widely followed by media organizations including The New York Times News Service, reserves the honorific for health care professionals.)

Epstein, 83, an essayist, author and former editor of The American Scholar, has been accused of advancing offensive views before. In a 1970 essay about homosexuality in Harper’s Magazine, he called gay people “cursed” and “an affront to our rationality.”

“If I had the power to do so, I would wish homosexuality” off the face of the earth, he wrote.

Writing in The Washington Examiner in 2015, he lamented that the essay had often been mentioned – usually by “professional gay liberationists” – any time that he writes something controversial.

“My only hope now is that, on my gravestone, the words Noted Homophobe aren’t carved,” Epstein wrote.

In his piece this week in The Journal, Epstein said that he had taught at Northwestern University for 30 years, even though he held only a Bachelor of Arts degree from the University of Chicago.

Addressing Dr. Biden, he wrote, “Your degree is, I believe, an Ed.D., a doctor of education, earned at the University of Delaware through a dissertation with the unpromising title ‘Student Retention at the Community College Level: Meeting Students’ Needs.’”

“A wise man once said that no one should call himself ‘Dr.’ unless he has delivered a child,” Epstein added. “Think about it, Dr. Jill, and forthwith drop the doc.”

Biden, who holds two master’s degrees and a doctorate in education from the University of Delaware, is clearly proud of her job as a community college professor.

When her husband, President-elect Joe Biden, takes office next month and she becomes first lady, she plans to continue teaching at Northern Virginia Community College, where she has been an English professor since 2009.

“She is an inspiration to me, to her students, and to Americans across this country,” he wrote on Twitter. “This story would never have been written about a man.” 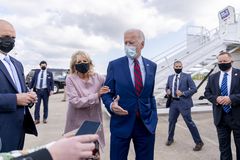 AP NewsBreak: Joe and Jill Biden get multi-book deal
April 5, 2017
Britain's Prince Harry to appear with Michelle Obama, Jill Biden at US Army's Fort Belvoir
October 22, 2015
Report an error
Due to technical reasons, we have temporarily removed commenting from our articles. We hope to have this fixed soon. Thank you for your patience. If you are looking to give feedback on our new site, please send it along to feedback@globeandmail.com. If you want to write a letter to the editor, please forward to letters@globeandmail.com.
Comments