Ann Reinking, a dancer, actor and Tony Award-winning choreographer who performed for nearly three decades on Broadway, where she was known for her long association with Bob Fosse and his work, died Saturday in Woodinville, Wash., near Seattle. She was 71.

Ms. Reinking had been visiting her older brother when she died in her sleep in a hotel room, said Dahrla King, her sister-in-law. The cause was not yet known.

As a performer, Ms. Reinking was perhaps best known for playing Roxie Hart in the hit John Kander-Fred Ebb musical Chicago. She stepped into the role in 1977, at 27, and it helped make her a star. In 1996, when she was in her 40s, she returned to the role triumphantly for a hugely successful Broadway revival, which she also choreographed.

Her success onstage in the original production fascinated audiences in part because of a romantic subplot playing out offstage. When Ms. Reinking, an ingénue, took on the role of Roxie, she was romantically involved with Mr. Fosse, the show’s director and choreographer. And the star she was replacing was Gwen Verdon, who had been married to Mr. Fosse and who had separated from him several years earlier. (“Annie taking over had extraordinary symmetry,” Ms. Verdon later recalled. “Pieces simply fell into place.”)

By the time Ms. Reinking returned to the role two decades later, she had become a formidable choreographer herself. She won the Tony Award for best choreography for the Chicago revival, which continued its run into this year. She imagined her dance movements as an updated tribute to Mr. Fosse’s earlier choreography. (Mr. Fosse died of a heart attack in 1987 at 60.)

“Ms. Reinking, a former dancer for Fosse (and, for a time, his companion), has brought her own light-handed sparkle in evoking the Fosse spirit,” Ben Brantley wrote in his review in The New York Times, “and the corps de ballet couldn’t be better, physically capturing the wry, knowing pastiche of some of Kander and Ebb’s best songs.”

She continued to keep the Fosse flame burning in 1999 by co-directing and co-choreographing the Broadway musical Fosse, a revue of his work, which won the Tony for best musical. “He lived to wake people up, to make them really live,” she said of Mr. Fosse in 1996. “He taught me how hard you have to work to do that.”

Ms. Reinking described Mr. Fosse’s work as having “influenced a generation,” but she said her own choreographic style was different – more balletic and quirky.

In 1979, she played a character based on herself in Mr. Fosse’s fantasy-filled but frankly autobiographical film, All That Jazz, with Roy Scheider as an intense Fosse-like director and choreographer.

“It was me, and it wasn’t me,” she said of her character, the director’s girlfriend, in an interview with the Times in 1980. “Basically I was very flattered. I think I came off as a good person and as someone who meant something to him.”

Ann Reinking was born on Nov. 10, 1949, in Seattle to Walter and Frances Reinking. Her father was a hydraulics engineer and salesman; her mother was a homemaker. Ann started ballet classes when she was 8, her mother told The Seattle Times. She was a teenager when she appeared in her first professional show, Bye Bye Birdie, at the Seattle Opera House, in 1965.

Ms. Reinking studied at the San Francisco Ballet School as a scholarship student and, after graduating from high school, attended a Joffrey Ballet summer residency in Tacoma, Wash. There, by her mother’s account, Robert Joffrey, the co-founder of the company, urged her to go to New York, telling her that her talents extended beyond dance to singing and acting.

In New York, Ms. Reinking was a member of the corps de ballet at Radio City Music Hall. Her first Broadway role was in the ensemble of Cabaret in 1969. She went on to appear in Coco, which starred Katharine Hepburn as Coco Chanel, and Pippin, which Mr. Fosse choreographed.

Ms. Reinking starred as Joan of Arc, opposite Joel Grey, in the short-lived 1975 musical Goodtime Charley. The next year, she joined the cast of the smash-hit A Chorus Line, then went on to appear in Dancin’, a musical revue directed and choreographed by Mr. Fosse, starting in 1978.

When Dancin’ opened, the Times’ dance critic Jennifer Dunning wrote that Ms. Reinking had successfully made the leap from the chorus line to leading roles.

“There could be no doubt that Miss Reinking had joined the ranks of Broadway’s brightest stars,” Ms. Dunning wrote. “With her long legs, mane of silky, flying hair and feline intensity, Ms. Reinking is a standout in some very fast company.”

(Mr. Fosse said he had choreographed one part of that show, Trumpet Solo, just so he could feature Ms. Reinking’s leggy extensions.)

In 1986, Ms. Reinking starred in a revival of Sweet Charity, a production that also featured Bebe Neuwirth, who went on to perform opposite Ms. Reinking as Velma Kelly in the Chicago revival.

Before the Chicago revival, Ms. Reinking, by then in her 40s, had never expected to dance onstage again, she said. Indeed, at first she turned down the offer to play Roxie again. But the director, Walter Bobbie, persisted, and she relented.

“She simply doesn’t dance like anyone else,” Ms. Neuwirth told the Times in 1996.

Ms. Reinking later found roles on the screen as well, notably as the billionaire Oliver Warbucks’s secretary, Grace Farrell, in the 1982 movie version of the hit musical Annie. In the number We Got Annie, Ms. Reinking’s character – who had encouraged her boss to adopt the orphaned title character – performs a victory dance in which she leaps and twirls, celebrating along with other members of Daddy Warbucks’s staff.

Ms. Reinking was married four times, including briefly when she was 21, and had a six-year relationship with Mr. Fosse. She and her most recent husband, the sports writer Peter Talbert, were married in 1994.

She leaves him, along with her son, Christopher, and six siblings: Richard, Robert, James, Jeffrey, Helen and Daniel.

In last year’s FX miniseries Fosse/Verdon, Ms. Reinking was portrayed by Margaret Qualley as a young, talented dancer who was becoming increasingly entangled with her mentor, Fosse, as he drifted from Verdon.

'Dancing With the Stars' winner Rumer Willis talks 'Chicago' and beating her dad to Broadway
October 7, 2015
Original stars to return to Broadway's 'Chicago' in Nov. to mark record-setting performance
September 26, 2014 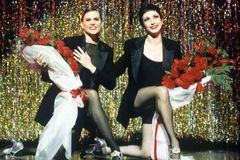 Fosse's ghost is the star
November 27, 2006
Report an error
Due to technical reasons, we have temporarily removed commenting from our articles. We hope to have this fixed soon. Thank you for your patience. If you are looking to give feedback on our new site, please send it along to feedback@globeandmail.com. If you want to write a letter to the editor, please forward to letters@globeandmail.com.
Comments