Aubry Crain is from a rough part of Chicago’s South Side, the kind of place where “if you hear a balloon pop, you duck.” She says her nephew was gunned down in the street one winter day, his blood staining the snow. Her fiancé was shot dead by an assailant at a family barbecue.

At age 21 she became a police officer, patrolling crime-ridden housing projects where people got thrown out of 13th-storey windows. By the time she was in her mid-20s, she had had enough. She packed up and moved to the suburbs two decades ago, putting the dangers of the city at a distance. “My daughter, she doesn’t know that part of life. It’s been great for her. It’s been great for us,” she said after church one recent Sunday.

Many black Americans are following in her footsteps. They are fleeing the crime and decay of their big-city neighbourhoods for greener pastures in the suburbs, in smaller cities or even back in the now-booming southern states that their grandparents left in the last century. It’s a slow-motion reversal of the epic Great Migration that saw millions escape the racism of the South for the cities of the North and West between 1910 and 1970.

The epicentre of the movement is Chicago. The Midwestern city, third biggest in the United States, saw its black population drop by about 180,000 in the decade after 2000. The phenomenon sometimes called black flight – a mirror of the white flight from cities in the 1960s and 1970s – has continued at a steady pace since. The Greater Chicago area has lost close to 46,000 black residents since 2010. Atlanta has replaced it as the metropolitan area with the second-largest black population in the U.S., after New York. Chicago now stands third. 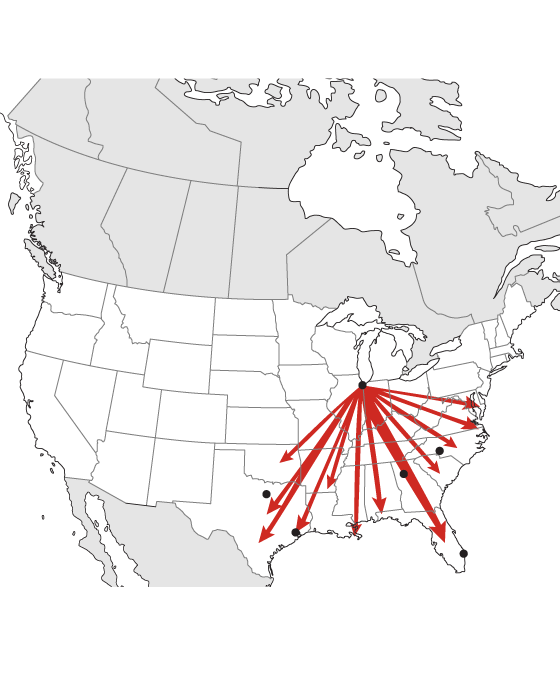 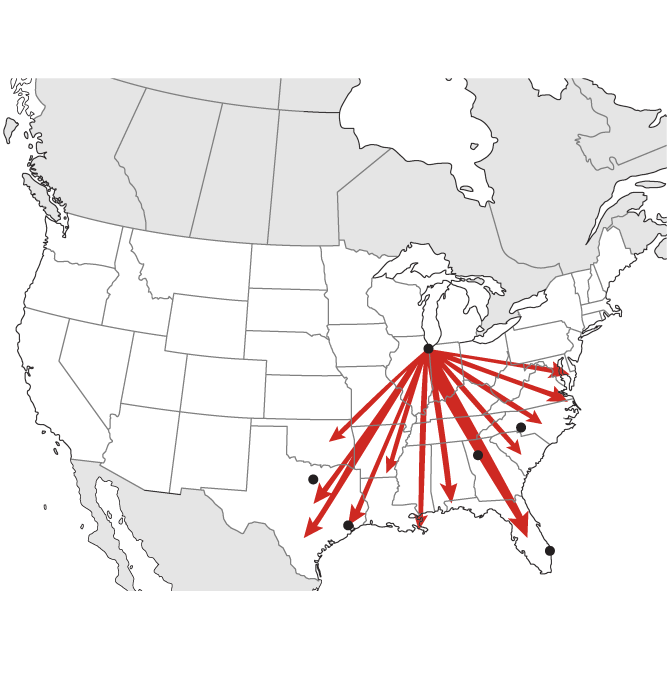 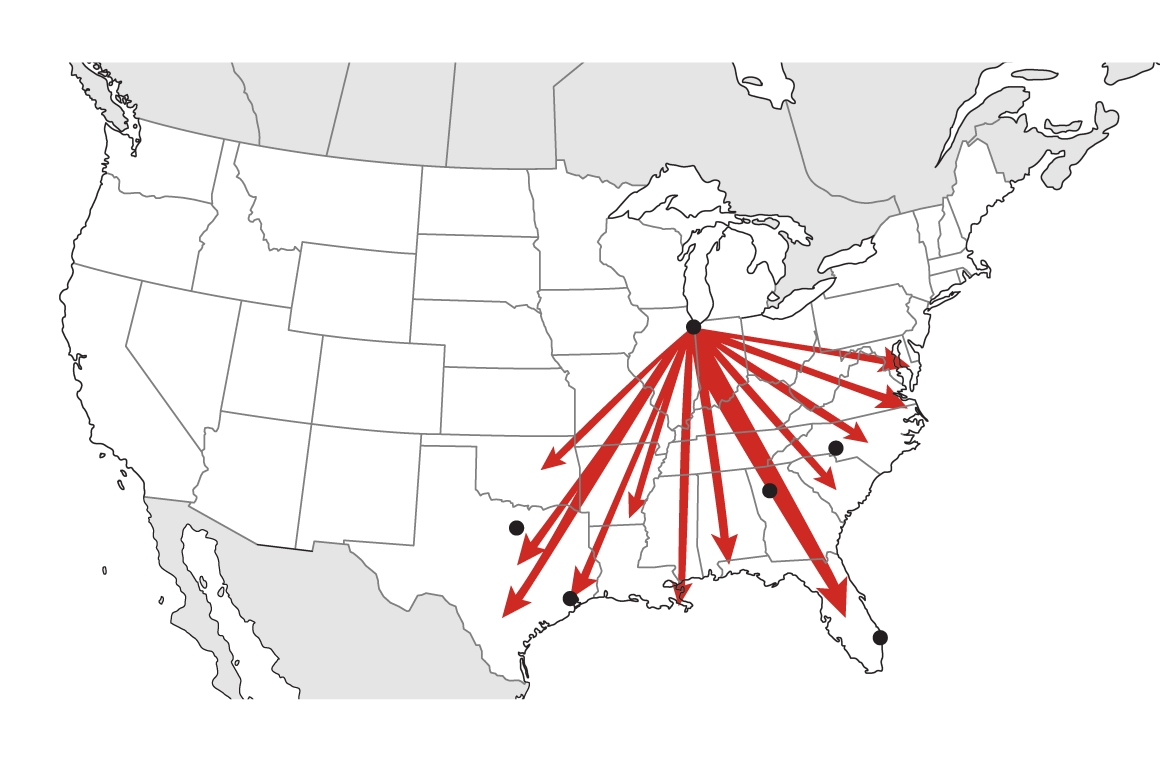 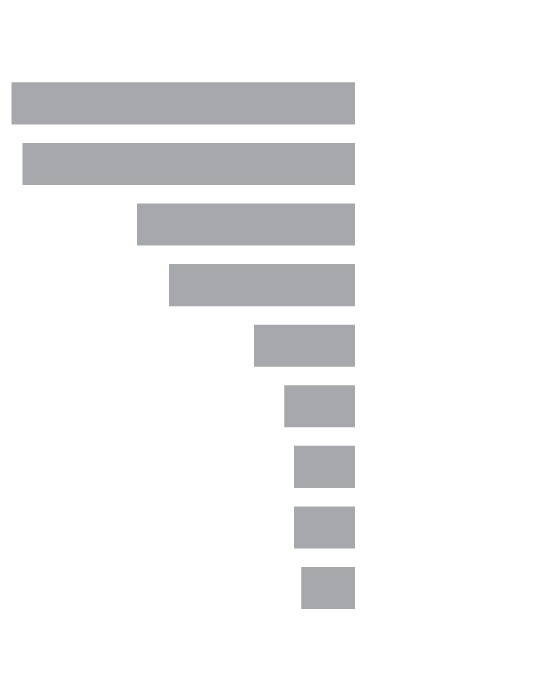 CITIES WITH THE LARGEST LOSS 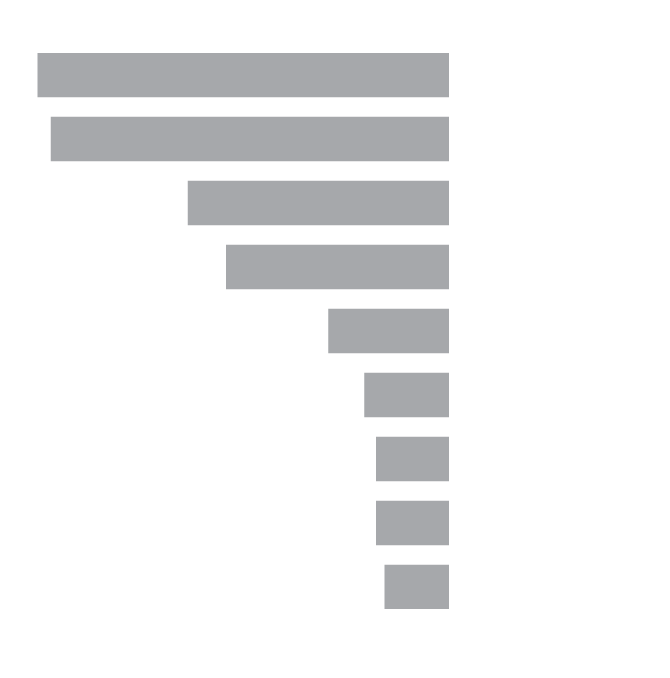 CITIES WITH THE LARGEST LOSS OF BLACKS 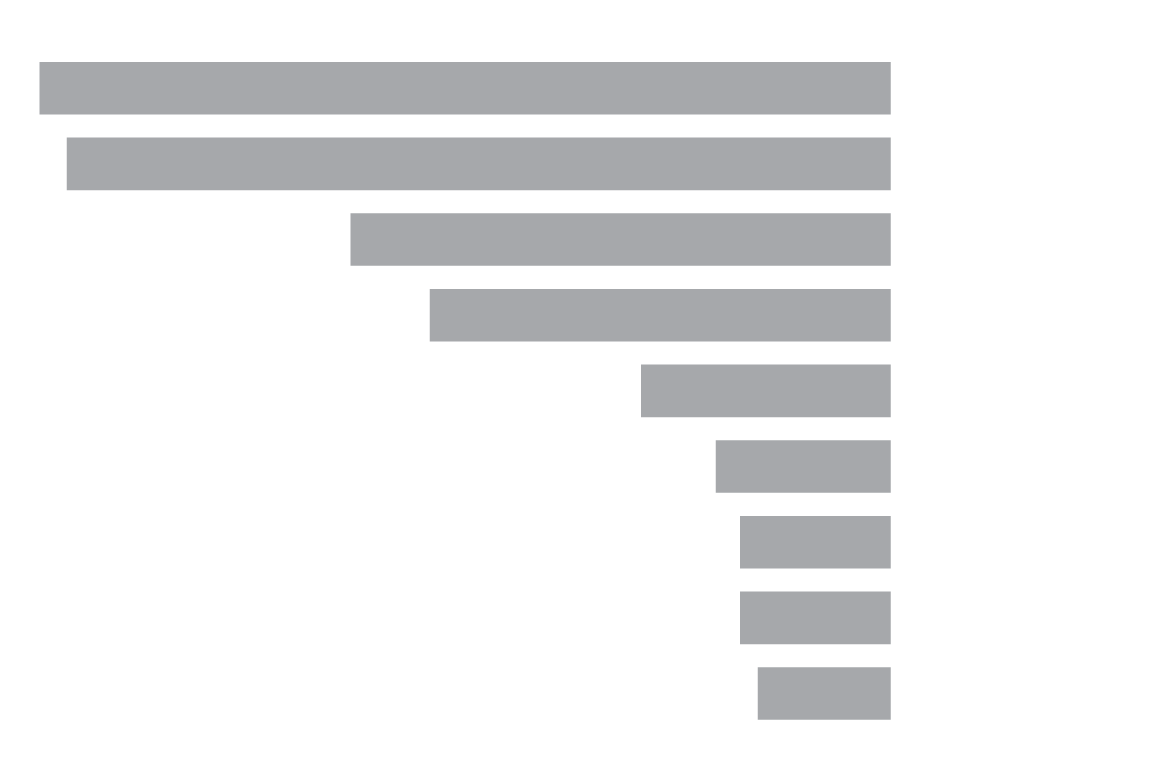 CITIES WITH THE LARGEST LOSS OF BLACKS

In some dangerous parts of Chicago, the black population has plunged. Three neighbourhoods – Austin, Englewood and West Englewood – among them had a total of 5,600 killings and non-fatal shootings between 2000 and 2015. Their combined population fell to 136,000 from 189,000 in those 15 years, a 28-per-cent drop.

Almost everyone seems to know someone who is leaving or thinking of leaving. “A lot of my friends have packed up and moved to Dallas, Houston, Atlanta, Milwaukee, Las Vegas,” says Dinah Felton, 54, who sells insurance and does investment planning for a living. She stopped to talk at a South Side library under the L, Chicago’s elevated transit system. She, too, has seen a loved one fall to gun violence: her son. “Kids don’t want to go to school because they might get shot on the way. That’s scary stuff there,” she says.

The reverse migration has reached such levels that politicians are battling over who is to blame. In January, a would-be candidate for governor of Illinois, Chris Kennedy, the son of Robert F. Kennedy, made headlines when he accused the administration of Chicago Mayor Rahm Emanuel of deliberately driving black residents out through “disinvestment” in their neighbourhoods, making Chicago smaller and whiter. He called it “strategic gentrification.” Mr. Emanuel dismissed that as a baseless insult, but said he was concerned about black flight and argued that city hall was investing heavily in needy neighbourhoods to stem it.

Black Chicagoans are leaving the city for a variety of reasons. Some decamped after Chicago started tearing down the big, crumbling housing projects where many thousands lived.

Some are fleeing rampant crime. The city had 650 homicides last year, down from 771 in 2016 but still more than double the number recorded in either New York or Los Angeles.

Some want better schools for their kids. Chicago’s troubled school system has lost tens of thousands of students in the years of black flight. The city closed many underperforming and underenrolled schools. Some are simply choosing to retire where the weather is warmer and the living cheaper.

“People left the South for opportunity. Now it’s the direct opposite. People are leaving Chicago to go south to look for better opportunities and a better lifestyle,” says Corey Brooks, pastor of the New Beginnings Church on the South Side. One of his daughters moved to Denver, another to New York. One son moved to Miami, then returned to Chicago. A second son, aged 17, still lives at home, but the pastor admits that “every single time he goes out the door I am terrified.”

Quitting Chicago often means a safer, more comfortable life, but it also means leaving home and family behind. “It is bittersweet,” says June Robinson, 30, who moved to Cedar Rapids, Iowa, with her five children in 2016.

She has a better job: $15.40 an hour in a department store warehouse, compared with $10 at McDonald’s in Chicago. She doesn’t have to tell her boys to get away from the windows when gunfire rings out, as she did in Chicago. “I don’t have to worry about anything. That’s freedom,” she says, speaking on the phone as her kids make a ruckus the background.

But she cried when she left her family – mother, sister, nieces and nephews – now a four-hour drive away. She was sad to leave the big city, too. “I miss the food, all the lights,” she says. “I love Chicago. It’s a beautiful city. But they’re making it impossible for people to live there unless they have a very good job.”

Many emigrants leave in search of well-paid work. The jobs in meatpacking plants or steel mills that brought black Americans to Chicago in the first place have blown away, gone to Mexico or China. Chicago lost 440,000 factory jobs between 1969 and 1983, a third of its manufacturing employment base.

In the past, says William Sampson, a public policy professor at Chicago’s DePaul University, “people could work in factories where their fathers and grandfathers worked. Well, those factories have closed. The economy has moved from a manufacturing to a service economy.” Poor, black Chicagoans don’t always have the skills for new-economy jobs. “They prefer white folks in a service economy,” Prof. Sampson says bluntly.

Figures released last year showed that 60 per cent of black Chicago residents between the ages of 20 and 24 were out of work, compared with 24 per cent of whites in that age group.

Those who join the exodus are often upwardly mobile. William Frey, a demographer at the Brookings Institution, a Washington think tank, says they tend to be better educated than average and have more cohesive families.

Black Americans, he notes, are following in the steps of other striving Americans who moved from cramped inner-city neighbourhoods to the wider spaces of the suburbs in past decades. In that sense, the emigrants are simply pursuing the American dream – one that, until now, has been denied to them. Young people who grew up in segregated, crime-ridden inner cities are deciding that “if they can avoid that and move on to some place else – as whites did – they are going to do that,” says Mr. Frey.

Darius Johnson is one of those young people. The 23-year-old was raised by his grandparents after his mother was hit by a stray bullet while sitting on her porch and killed. Mr. Johnson was six months old.

He did well enough in school to get into Morehouse, a 150-year-old college in Atlanta that has educated generations of black Americans. He went on to Columbia University in New York for journalism and now works as a television reporter in Savannah, Ga. He loves the work and is glad to have escaped Chicago and its troubles, even if he misses his friends and grandparents. His only concern is for those left behind in the great emigration.

“It’s good that people are able to leave to find better opportunities,” he says, “but you wonder, like, wow, what is this city going to become if everyone is leaving because of violence?”

Chicago Tribune journalist William Lee wonders, too. He spoke to Mr. Johnson in 2016, when the young man was still at college. In an essay for the Tribune, he wrote: “The population shift has folks like myself, left behind on the South Side, feeling like life after the rapture, with relatives, good friends and classmates vanishing and their communities shattering.” He fears the exodus is robbing Chicago of the educated, ambitious people who could help revive its troubled neighbourhoods and act as role models to its youth.

The dwindling of black Chicago is all the more poignant when set against the dramatic story of its rise. Over the course of the Great Migration, Chicago’s black population grew from just 44,000 to more than a million. At one point, writes Isabel Wilkerson in her 2010 history The Warmth of Other Suns, 10,000 people were arriving in the city every month, pouring off northbound trains onto Chicago railway platforms. 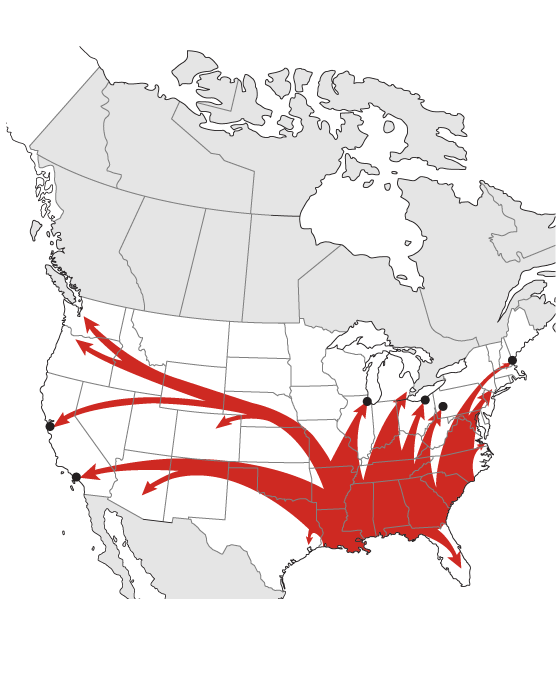 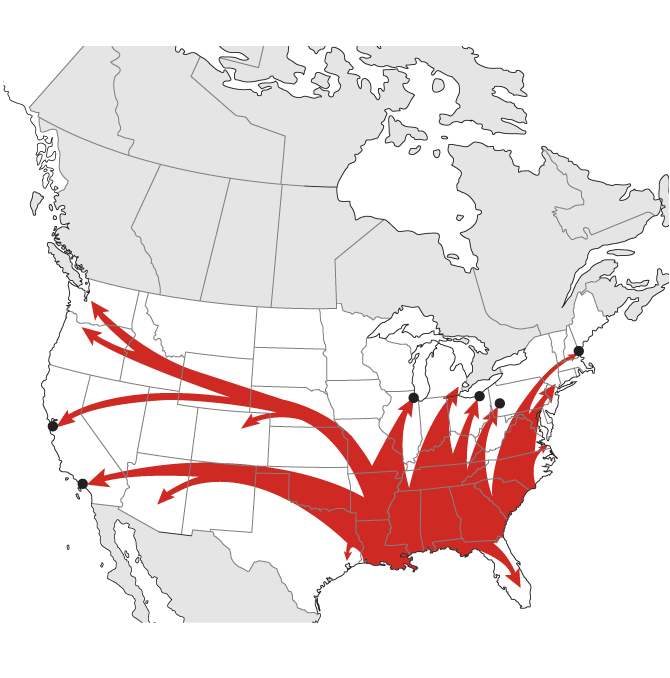 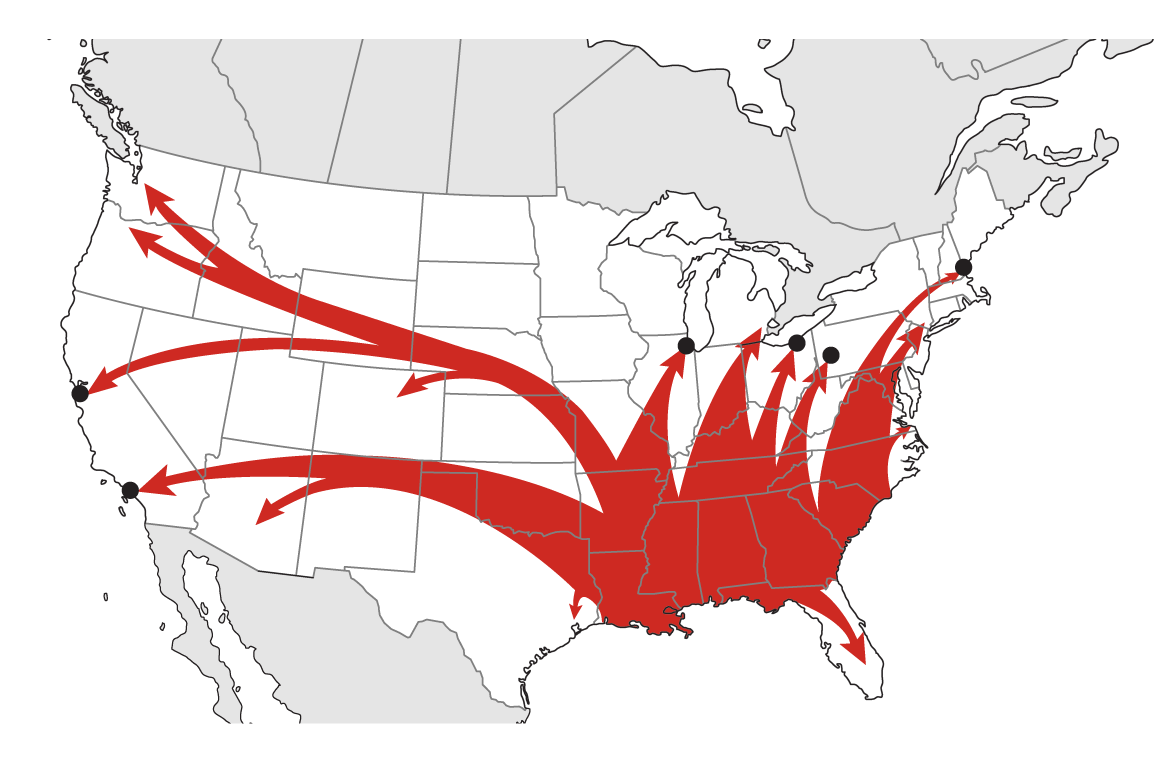 The newcomers found more liberty and opportunity than they could have dreamed of in the South, where they often lived in fear of lynchings and other brutalities. But they faced new forms of prejudice in their adopted city. Effectively excluded from white neighbourhoods, they gathered together in a stretch of the South Side that became known as “Bronzeville.”

The white flight to the suburbs deepened the divide. The riots that broke out after the assassination of Martin Luther King 50 years ago left many neighbourhoods devastated. Chicago was rated the most segregated city in the U.S. by the 1980 census. Today a visitor can still go for blocks on the South Side without seeing anyone who is not black. Whites have been moving back to up-and-coming parts of Chicago, particularly around the downtown and the north – but large stretches of the South and West sides remain untouched by urban revival.

Even when they move out of the city, black Chicagoans often end up living in mainly black communities and sometimes face discrimination. A series last year in the Chicago Defender, a historic black-community newspaper, showed how Chicago exiles can face a pushback from locals when they move to smaller Illinois cities such as Danville or Rockford.

Still, the outflow shows no sign of easing. The latest census figures showed that blacks made up 29.3 per cent of Chicago’s population, down from 33.2 per cent as recently as 2010.

Aubry Crain, the police officer, finds it all very sad. She feels attached to her old neighbourhood, despite the violence that claimed her fiancé. On Sundays she leaves her comfortable three-bedroom house in Hazel Crest, a southern suburb, to attend services at Pastor Brooks’s church that feature sermons, baptisms and joyous singing. “This is always my home. This is always my home. Always,” she says.

She is planning another move all the same. Now 50 and just two years short of retirement from the police force, she hopes to move to Las Vegas, find work in the security industry and do some volunteering in her spare time.