Up and down the streets of South Africa’s biggest cities, the campaign posters of the main opposition party are trumpeting a simple slogan: “Secure our borders.”

The Democratic Alliance has seized on illegal immigration as one of its top issues in Wednesday’s national election. Its campaign platform complains of "uncontrolled immigration [that] violates the rights of ordinary South Africans.“ And it has called for military forces to be deployed to the country’s borders.

After years of economic stagnation and high unemployment in South Africa, immigrants have become targets in this election. Politicians have been quick to exploit the growing anti-foreigner mood, which has become more toxic in South Africa than in many other countries.

The ANC, which is expected to win 50 per cent to 60 per cent of the vote in Wednesday’s election, has found the illegal immigration issue a useful diversion from the slumping economy and persistent corruption scandals. The opposition DA has found it an equally useful weapon to wield against the government.

A recently released poll by Pew Research Centre found that 62 per cent of South Africans see immigrants as a burden on the country by taking jobs and social benefits away from local people. That’s a much higher percentage than in most European countries, and more than twice as high as the percentage of Canadians who see immigrants as a burden, according to the global survey by Pew Research. (The margin of error is 2.3 percentage points.)

In reality, evidence shows that immigrants are a benefit to South Africa’s economy. A study last year by several groups, including the International Labour Organization, concluded that immigrants in South Africa pay higher taxes and boost the country’s per-capita income by up to 5 per cent by improving productivity.

But this message hasn’t reached the majority of the population. Foreigners, largely from African countries, are a convenient scapegoat for the high jobless rate. The anti-immigrant rhetoric is more intense than in previous elections, because politicians have learned that this rhetoric wins support, according to Loren Landau, a Johannesburg-based scholar on migration issues.

The tensions have spilled over into violence. In late March and early April, attacks by South African mobs led to several deaths and injuries among African migrants in the city of Durban, and hundreds of migrants were forced to seek shelter at police stations after their homes were looted or destroyed.

The United Nations refugee agency, UNHCR, said it had received reports that at least six foreigners in the Durban area were killed in late March as mobs armed with machetes and metal rods broke into their homes to chase them away and loot their belongings.

It was just the latest in a long series of anti-foreigner attacks. Data compiled for the Johannesburg-based African Centre for Migration and Society show that in 2018 alone, there were dozens of attacks on foreigners, including 12 killings and 29 physical assaults. Nearly 140 shops were looted and more than 1,140 people were forced to flee their homes last year.

The trend has grown worse this year. “Violence against foreign nationals appears to be on the rise, amid political tensions in the lead-up to national elections,” a report by Human Rights Watch and the African Diaspora Forum said.

“The police have yet to make any arrests following these attacks,” the groups said in the April report. “South Africa has brought virtually no one to justice for past outbreaks of xenophobic violence.”

The latest attacks have been so disturbing that they have stoked fears among Southern African election observers. The monitoring mission, headed by Zambian Foreign Minister Joseph Malanji, expressed worries that its observers could come under violent attack during the election this week.

Leading members of the ANC and the Democratic Alliance have inflamed the tensions with their own rhetoric. Before settling on its latest slogan about securing borders, the DA had earlier experimented with an even more provocative slogan: “All South Africans First.”

The DA Mayor of Johannesburg, Herman Mashaba, tweeted a photo of a food trader and alleged that the trader could be importing Ebola from abroad. The ANC government’s deputy police minister, Bongani Mkongi, complained that South Africa was “surrendering our land” to foreign saboteurs and the entire country could be taken over by foreigners.

Both politicians were obliged to retract their comments after widespread criticism. But the anti-foreigner comments have continued, with Mr. Mashaba alleging that “millions of undocumented persons” are “taking advantage of our porous borders.” (His numbers were wrong. Only about 2.2 million of South Africa’s 57 million people are immigrants, and most are legally in the country.)

But while the cabinet ministers agreed to the meeting, they rejected any criticism. They complained that the ambassadors were exaggerating the problem, and they blamed foreign migrants for causing crime.

The police minister, Bheki Cele, told the ambassadors that certain African nationalities were involved in crimes such as drug trafficking, house robberies or rape. One African ambassador, according to local media reports, said Mr. Cele’s statements were likely to incite further violence against foreigners. 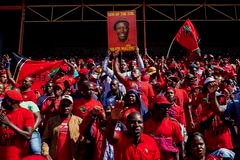