The contraption looked like a farm implement. It consisted of a seemingly primitive four-wheeled cart with a tangle of yellow tubes leading to the back of the towing vehicle, an ATV.

The vehicle was travelling back and forth across a 30-hectare field, but it wasn’t seeding or spraying pesticides, as it seemed; using novel ground-penetrating radar (GPR), it was mapping out an entire buried ancient Roman city – doing so in amazing 3-D detail.

The GPR showed not only the tops of the buildings but what lay beneath them, including a sophisticated plumbing system, suggesting the houses had running water, a feature not common in European and North American cities until the 1800s.

The hidden city is called Falerii Novi, about 50 kilometres north of Rome. The results of the three-summer mapping project by archeologists from Cambridge University and Belgium’s Ghent University were published this week in Antiquity, an academic journal dedicated to archeology.

“This is the first time we have used this technology to look at a whole city,” said Martin Millett, 64, the Laurence professor of classical archeology at Cambridge, in an interview. “What we have is very large scale and very high resolution.”

GPR may be the future of archeology. The massive amounts of data it collects mean detailed archeological studies can be done without the expense and time required for digging. Excavating a big site can take years or decades – centuries in the case of Pompeii, which was rediscovered in the late 16th century and whose archeological work continues today.

Falerii Novi’s existence has been known for decades. The walled market town is believed to have been founded by the Romans in 241 BC. It covered 30.5 hectares (75 acres), a bit more than a third the size of Pompeii, and probably had a population of about 3,000.

It endured the collapse of the Western Roman empire in the fifth century and was abandoned for unknown reasons in the early Middle Ages. Some of the structures were looted to provide stone and brick for new buildings; the functioning Medieval church, for instance, is partly built of material from the ancient city.

The once-thriving city then vanished. Its ruins lie about two metres below the surface. The arched entrance gate within a small portion of the defensive wall is the only intact feature.

About 20 years ago, the British School of Rome’s Tiber Valley Project mapped Falerii Novi using magnetometers, an old technology that measures magnetic field strength. It is used by geologists to detect mineral deposits and by the military to locate submarines. It is also widely used by archeologists, since even stone and brick have their own unique magnetic properties, which can be measured by sensitive equipment. 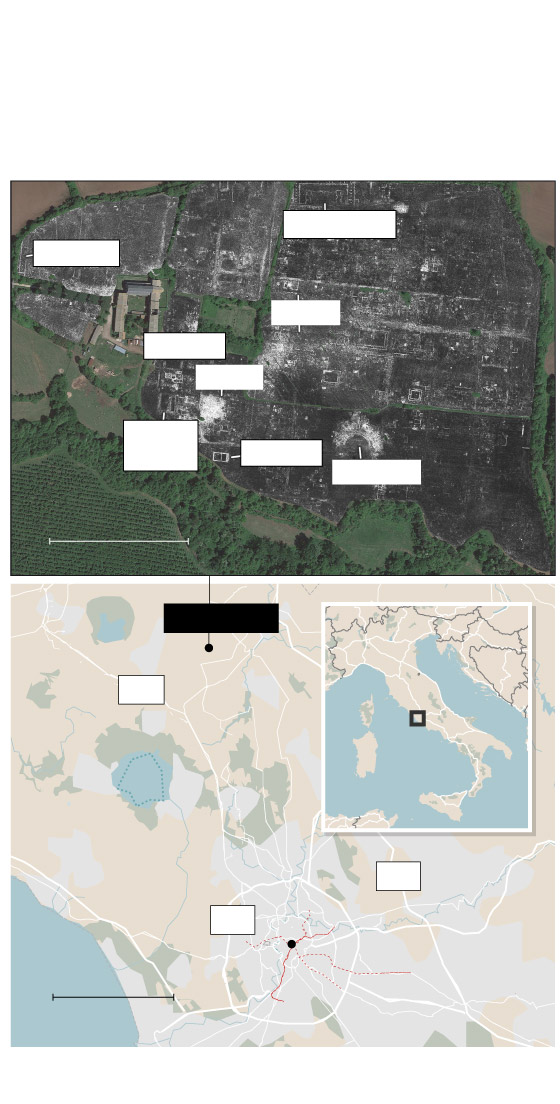 the remains of the ancient Roman city of Falerii 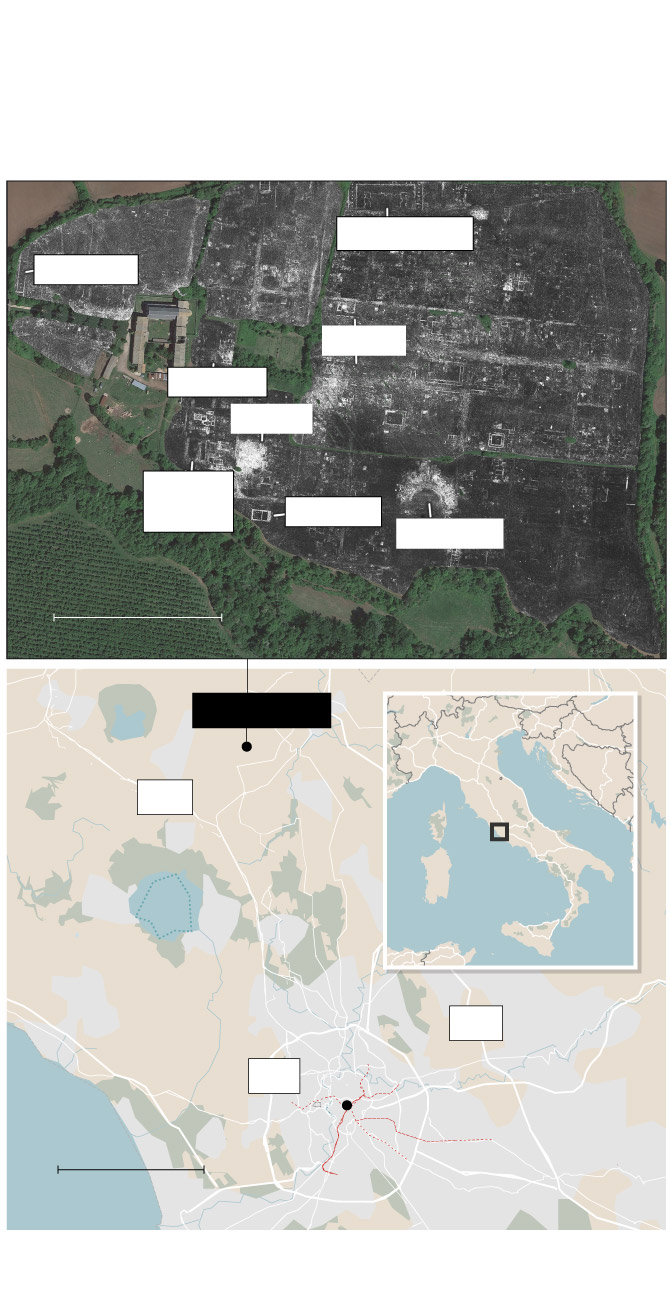 A Ground Penetrating Radar (GPR) map shows the remains of the ancient Roman city of Falerii Novi in this image released on May 8, 2020. 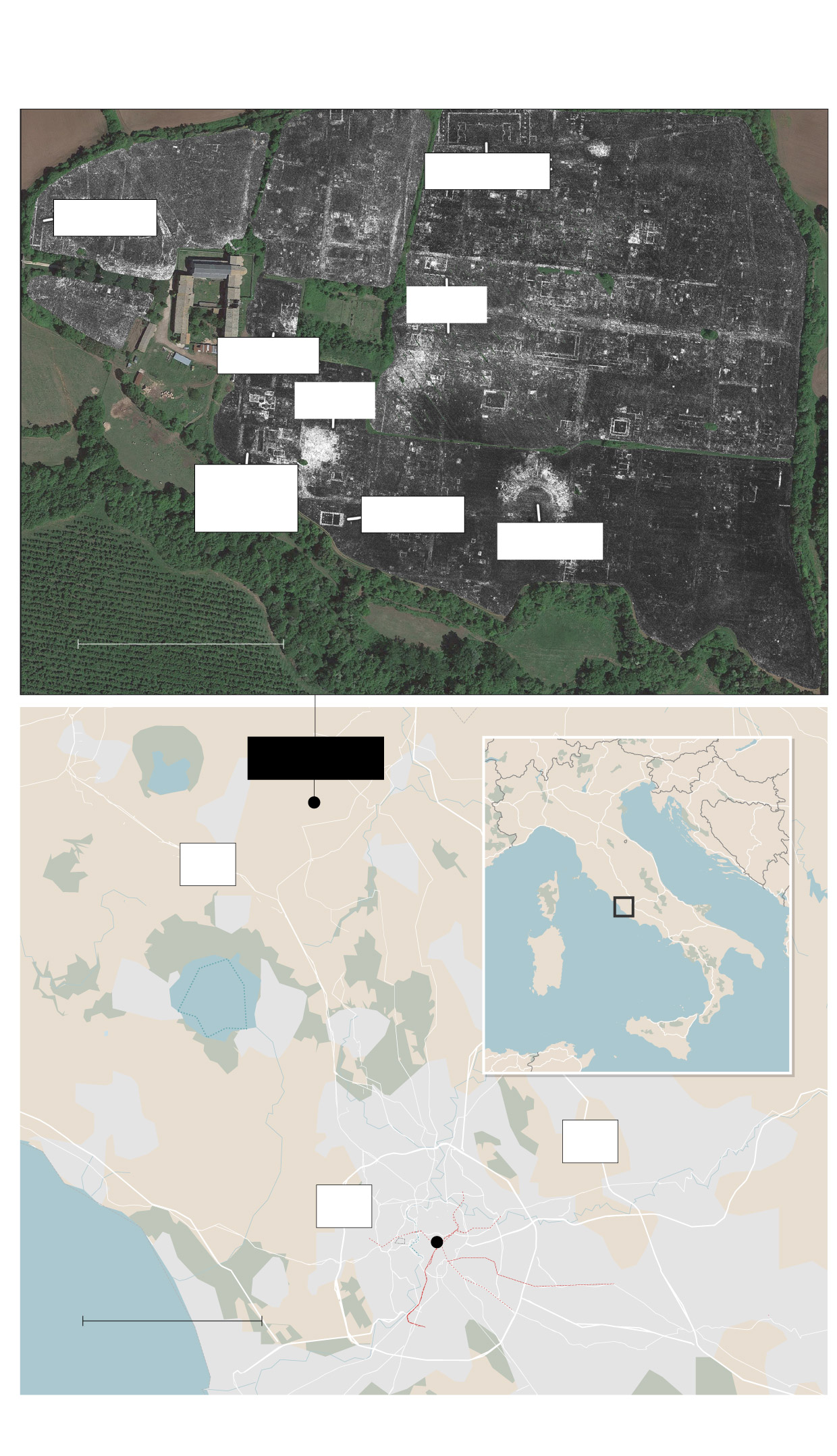 The magnetometry survey provided a compelling view of the city, but only in 2-D; it yielded composite images of surface and near-surface structures, but nothing else. GPR, which uses high-frequency radio waves to detect the reflected signals from subsurface structures, can provide detailed 3-D images as it slices through the depths.

“You can see things at depth, allowing you to see if one building is built on top of another,” Prof. Millett said. “The GPR allows you to see an object the size of a dinner plate under two metres of soil. There is a clarity to the images.”

The Cambridge and Ghent universities project began in the summer of 2015. The work went slowly because GPR works best when the soil is dry; rain would delay the use of the GPR antennae for days. The machine collected 72 million readings, equivalent to 29 billion data points, and 4.5 gigabytes of raw data per hectare.

Prof. Millett said the mapping survey revealed architectural details that the magnetometry machines missed. “Some of the buildings were much more elaborate than we had thought,” he said. “This suggests the town was fairly wealthy.”

The survey also revealed public structures that had not been detected before, including a temple, a market building and a bathhouse, each of which was more richly decorated than would be expected for a small city. The archeologists also found an enormous and possibly spectacular public monument that measured 60 by 40 metres.

Among the most intriguing discoveries was the network of pipes built beneath the public buildings and residences, not just along the streets, as they are in other ancient Roman cities. The pipes led to Falerii Novi’s aqueduct and what appears to be a large, open-air public pool. The advanced hydraulic technology provided yet another clue that the city was well planned and affluent. “It was an indicator of status,” Prof. Millett said.

There are no plans to excavate Falerii Novi. Doing so would probably unearth nothing as well preserved as Pompeii, whose structures and frescoes were hermetically sealed by the volcanic ash from the eruption of Mount Vesuvius.

But the Falerii Novi project has proven the worth of GPR, which is emerging as the most useful tool to learn about ancient cities in their entirety.

Prof. Millett, the British School of Rome and Italy’s archeological authority are already deploying GPR at another small Roman city, Interamna Lirenas, roughly halfway between Rome and Naples. Magnetometry and some digging are also being used at Lirenas, whose patron was Julius Caesar, to provide a detailed picture of the city and how it functioned as a society – and to offer more clues to how Roman urbanization was used to create and control an empire that stretched from Britain to Syria.

“We don’t necessarily have to dig any more to learn all this,” Prof. Millett said.