The peso closed 4.29 per cent lower at 55.9 per U.S. dollar after touching 59 to the dollar earlier. The currency had hit an all-time low on Monday of 65 to the dollar, a drop of 30 per cent, on fears that a Fernandez government could take Argentina back to interventionist economic policies.

The central bank has sold a total $255 million of its own reserves since Monday in an effort to help steady the currency.

Fernandez, who has former President Cristina Fernandez as his running mate, pulled off a stunning upset in the primary with a wider-than-expected 15-point lead over Macri, a free market proponent.

Monday’s crash in the peso unnerved global equities investors, with markets already jittery over the Sino-US trade war and protests in Hong Kong.

“Yes, Argentina is a small economy. However, the last thing global markets want to see is another market-friendly government fall to populism and/or geopolitics,” said Rabobank strategist Michael Every.

The weaker peso quickly translated into higher prices on Argentine store shelves. Some shops selling household appliances in the capital Buenos Aires, at a loss for how to price their products amid the fluctuating exchange rate, stopped printing price tags and instead asked customers to inquire.

There was also doubt over the future of an “essential goods” program introduced by Macri in April to fix low prices through October for 64 basic food products. The secretariate of trade did not respond to a request for comment on whether the government would renegotiate the prices with companies.

Buenos Aires resident Florencia Nagy, 31, said, “The atmosphere has been tense” in the city.

“A lot of anger, a lot of confusion, many people thinking that leaving the country could be an option,” said Nagy, who said she voted for candidates from more than one party in the primary.

In an interview Monday, Fernandez said he was willing to co-operate with the current government after his primary triumph on Sunday sent the peso, stocks and bonds reeling.

The primary results showed Fernandez, a former cabinet chief, was well placed to win October’s general election in the first round. He blamed Macri for the market turmoil.

“The dialogue is open, but I don’t want to lie to Argentines. What can I do? I’m just a candidate, my pen doesn’t sign decrees,” Fernandez said in an interview with Argentine TV channel Net TV broadcast on Monday.

Fernandez, regarded as a moderate within the Peronist movement, has said he would seek to “rework” Argentina’s $57-billion standby agreement with the International Monetary Fund if he won the general election. He has proposed an economic and social pact to combat inflation, which is running at 55 per cent.

Macri, too, deflected responsibility for the financial volatility, saying at a news conference on Monday that the opposition should “self-criticize” its own policies in the wake of the market reaction.

Macri, a scion of one of Argentina’s wealthiest families, came to power in 2015 on promises to kick-start Latin America’s third-largest economy via a liberalization wave.

But the promised recovery has not materialized and Argentina is in recession.

Though Argentines are accustomed to a decades-long cycle of peso weakness and inflation, the severity of this week’s market reaction resonated on the streets of Buenos Aires, with some bracing for a long period of economic hardship.

“If we get the same result (as the primary) in the October election, the country will be worse off,” said Jazmin Lia, a 25-year-old student who said she voted for Macri in the primary.

“What’s happening with the exchange rate and the collapse of the market is just an example of what will happen,” Lia added.

Carolina Fiuza, 31, blamed Macri for the market volatility and said it seemed more like a “strategy than a reality.” She said she wasn’t worried about the market meltdown.

“I see people desperate for the peso value to increase, I see everyone thinking that it will devalue even worse in October. In the end, I think everything will be work out, as always,” said Fiuza, who voted for Peronist candidate Roberto Lavagna in the primaries.

Argentine assets had not recorded the kind of simultaneous fall seen on Monday since the South American country’s 2001 economic crisis and debt default, Refinitiv data showed.

Investors were still assessing the damage caused by Monday’s crash. Argentina’s country risk rose 164 basis points to 1,631, the highest since 2009.

Index provider MSCI said it has not yet considered reclassifying the recently upgraded Argentina stock index out of emerging markets despite the massive spike in volatility and decline in prices.

Argentina’s century bond fell over six points on Tuesday to trade at 51 cents on the dollar, compared to around 75 cents on Friday according to MarketAxess data.

As concerns rise about Argentina’s ability to meet its debt obligations, investors are looking closely at the government’s ability to roll over its peso maturities, including short-term notes known as ‘Letes.’

“Markets will be sweating bullets each time one of these maturities come due,” Jeffries Fixed Income said in a note to investors.

The cost of insuring against an Argentine sovereign default jumped again on Tuesday, according to data from HIS Markit. Markit’s calculations price the probability of a sovereign default within the next five years at more than 72 per cent. 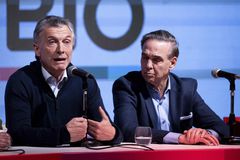