Aritz Parra and Mosa’ab Elshamy
MADRID
The Associated Press
Published May 17, 2021 Updated May 17, 2021
For Subscribers
Comments
Text Size
Please log in to listen to this story. Also available in French and Mandarin. Log In Create Free Account

Around 3,000 Moroccans, a third of whom were presumed to be minors according to Spanish authorities, swam and used inflatable boats Monday to cross into Ceuta, the largest number of migrant arrivals in a single day into Spain’s enclave in northern Africa.

A young male drowned attempting the crossing and various others, including toddlers, were rescued suffering from hypothermia, health authorities said.

The influx followed the souring of Spain’s relations with Morocco, its southern partner and key ally on controlling migration flows, over Madrid’s decision to allow the leader of a militant group fighting for independence from Morocco to receive hospital treatment.

Ceuta and nearby Melilla are regarded as a stepping stone into Europe for African migrants. Hundreds of them risk injuries or death every year while trying to jump over fences, hide inside vehicles or by swimming around breakwaters that extend several meters into the Mediterranean Sea.

But the figure of 3,000 people making the crossing in just one day strained police and emergency workers in the city of 84,000. The figure is nearly three times the total arrivals so far this year in the two Spanish territories and more than in 2020, when 2,228 people arrived by both land and sea.

Footage published by El Faro de Ceuta, a local newspaper, showed people climbing the rocky wall of the breakwaters and running across the Tarajal beach, in the southeastern end of the city.

Other videos verified by The Associated Press showed long rows of young men lining up at the gates of a warehouse managed by the local Red Cross, waiting to get registered by Spanish Civil Guard officers.

Spain was deploying 200 more law enforcement officers to Ceuta, including anti-riot police and officers specialized in border control to speed up the return of those who arrived, the Interior Ministry said in a statement late Monday. Spain doesn’t grant Moroccans asylum status. It only allows unaccompanied migrant children to legally remain in the country under the government’s supervision.

The influx of Moroccans came at the end of the Muslim celebrations of Ramadan, when many residents in Europe return home after visiting relatives in the northern African country. It also followed Madrid’s decision to host Brahim Ghali, the head of the Polisario Front that disputes Rabat’s claim on Western Sahara, who is recovering from COVID-19 in a hospital in northern Spain.

The Spanish government, which allowed Ghali to enter the country under a disguised identity, has justified its decision to give him shelter on humanitarian grounds.

The Moroccan foreign ministry said last month that Madrid’s move was “inconsistent with the spirit of partnership and good neighborliness.” In May, the ministry also said that Spain’s move would have “consequences.”

Mohammed Ben Aisa, head of the Northern Observatory for Human Rights, a nonprofit group that works with migrants in northern Morocco, said that the influx was a mix of the seasonal attempts to reach Europe, the arrival of good weather and the recent tensions between Rabat and Madrid.

“The information that we have is that the Moroccan authorities reduced the usually heavy militarization of the coasts, which come after Morocco’s foreign ministry statement about Spain’s hosting of Brahim Ghali,” Ben Aisa told The Associated Press.

“The area is heavily monitored by security forces and attempts there, whether to climb the fence or swim, are usually stopped,” he added.

Spain has strong but complicated diplomatic ties with its southern neighbor. The two countries often cite their decades-old cooperation on controlling migration flows, which includes recurring payments to Rabat from Spain and the European Union as well as training to Morocco’s police and army, as the blueprint for the EU’s migration policies in the Central and Eastern Mediterranean.

Cooperation with Moroccan intelligence on fighting extremism is also key for Europe.

Asked by reporters whether the government of Rabat was deliberately relaxing controls on departing migrants, Spain’s foreign minister simply said she had no information.

“We are not aware,” Arancha Gonzalez Laya said before concluding brief media remarks. The ministry later declined to further elaborate.

In a statement, the interior minister said that Spain “has been working tirelessly on a migration policy that concerns the whole of the European Union and Morocco, the country of origin of the people who have arrived swimming today.”

A spokesman with the Spanish government’s delegation in Ceuta said that the crossings began at 2 a.m. in the border area of Ceuta known as Benzu and were then followed by a few dozen people near the eastern beach of Tarajal.

The daylight didn’t stop the crossings from the nearby Moroccan town of Fnideq, as entire families with children swam or boarded inflatable boats, said the spokesman, who wasn’t authorized to be identified by name in media reports.

A 10-meter-high (32-foot-high) double fence surrounds the eight kilometers (five miles) of Ceuta’s southwestern border with Morocco, with the rest of the tiny territory facing the Strait of Gibraltar and the European mainland across the sea.

Several gates along the perimeter have been closed for over a year as Morocco has banned all travel by land in an attempt to avoid coronavirus infections. The decision has left jobless many locals who rely on work in Ceuta and Melilla or cross-border trade for a living.

More than 100 young Moroccans also swam into the Spanish territory at the end of April. Authorities said most of them were returned to their country in less than 48 hours after being confirmed as adults.

Malian woman gives birth to nine babies in Morocco
May 5, 2021 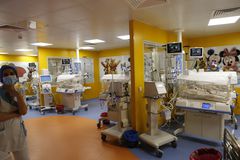 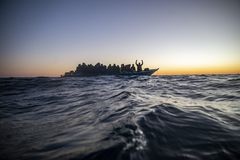