Kem Samathida struggles to find comedic relief when she refers to herself as a “wanderer of the world.” But what the self-imposed Cambodian exile really means when she says she can’t return to Phnom Penh is that she fears she might end up like her father: sitting in a jail cell for the past 11 months awaiting trial over charges of treason.

And the 31-year-old’s concerns appear to be warranted. In the lead-up to Cambodia’s general election on Sunday, Prime Minister Hun Sen’s Cambodian People’s Party (CPP) has been accused of intimidating and jailing opposition leaders, civil-society activists and journalists. It has also reportedly threatened to remove vital services from rural communities if residents don’t vote for the CPP in an election campaign largely acknowledged by the international community as a sham.

“This whole election is just a dictatorship dressing up poorly as a democracy,” she says in a Skype interview from her temporary home in Washington, where she resides with her sister, Kem Monovithya, also in self-imposed exile.

Their father, Kem Sokha, the opposition leader for the Cambodian National Rescue Party (CNRP), was jailed in September on widely discredited claims of collusion with the United States to topple the government. Shortly after, the country’s national independent newspaper was shut down. Then, in November, the CPP dismantled and outlawed the CNRP, sending half the opposition into exile or underground.

Mr. Hun Sen’s push for a more open authoritarianism has largely been supported by China, which has taken over the role that Western governments used to play in the country’s development. Foreign aid has been replaced with Chinese investment capital, allowing Cambodia to shrug off international censure.

But even facing a Prime Minister whose 33-year rule of the country has been marred by human-rights abuses, Samathida and her sister are determined to see their father’s ambition of creating a democratic Cambodia come to fruition. They are part of an international network of activists and Cambodian politicians, both in the country and abroad, who are involved in an election boycott campaign.

“What Hun Sen is doing right now is only working for short term. It’s only delaying the change that is coming, but it’s coming for sure,” Samathida says. Her sister has been petitioning the U.S. Congress on behalf of the CNRP to put more pressure on the Cambodian government.

Pulling on these international strings has been the opposition’s last resort, as CNRP councillors in Cambodia have been banned from participating in politics for the next five years, including the next general election in 2023.

Even after the ban is lifted, it is unlikely that Hun Sen will allow opposition members such as Sam Rainsy, the party’s previous head, and Kem Sokha from entering the political arena, explains Sebastian Strangio, author of the biography Hun Sen’s Cambodia.

“He has given every indication that he’s bent on reshaping the Cambodian political landscape permanently and there’s little indication that he’ll be deflected from that at all,” Mr. Strangio says during a Skype interview from Adelaide.

In 2013, Mr. Hun Sen’s ruling CPP faced its first real challenge to power as the CNRP gained an unprecedented surge in support from young voters. The ruling CPP won a narrow victory of 55 per cent of the 123 seats; from the 2008 election, the Prime Minister lost 73 per cent of the seats his party held.

“We were shocked. Tens of thousands people were showing up and not only that, were getting up to speak,” Samathida says. The public forum and engagement that Cambodia witnessed during the 2013 general election was a marked shift from how Cambodians had historically engaged in politics.

“Cambodia people, if they want to talk about politics in a café or something, they only whisper and some people are like, ‘shh don’t talk,’ ” she says. “But here, they actually spoke on the microphone. They broadcasted themselves on Facebook on social media,” she added.

Cambodia’s people – 65.3 per cent of whom are under the age of 30 – have struggled economically for years.

“People basically want their lives to improve and they see the CPP as increasingly unable to deliver those sorts of improvements," Mr. Strangio says. "And so that gave the CPP the rising tide of opposition, which was thrown behind the CNRP at the last election.”

The opposition inside Cambodia – and around the world – is hoping the election-boycott movement results in a lower turnout, as a means to showcase the illegitimacy of the election.

Pretty Ma, the previous secretary-general of the CNRP in North America for Cambodians living abroad, says that he finds himself relying on social tools from his home in Saint Jérôme, Que., to mobilize support in Canada for an election boycott.

“We’re happy that we have social media to get our message [out] and share useful information regarding what’s happening,” he says. Even though the Prime Minister’s son heads up a national cyberwarfare division, Mr. Ma says: “We have crossed a point of no fear. People are not fearful like they were of the Khmer Rouge regime.”

With arrest warrants in their name in Cambodia, opposition figures such as Mu Sochua and Mr. Rainsy reside in self-imposed exile in France. Mr. Rainsy stepped down as leader of the CNRP last fall in a last-ditch effort to save the party from being dissolved. He is appealing to Western governments and relying on Twitter and Facebook to mobilize the opposition and supporters through the “Clean Fingers” campaign − a name inspired by the anti-fraud ink used on voter’s fingers on election day.

“We are contesting the outcome by calling for a boycott of the election,” he says in an e-mail interview. “The CNRP is entitled to count every abstention as a vote for the CNRP.”

Despite the fact that the local government has ordered authorities to arrest anyone who shows support for “Clean Fingers,” opposition members abroad and a select few inside the country continue to post their support for the boycott on social media accounts.

Brad Adams, the Cambodian representative for the U.S.-based Human Rights Watch, says the government’s tactics against the boycott are just another nail in the coffin against this “ridiculous election.”

“This is not an election. This is a coronation of Hun Sen,” Mr. Adams said during a phone interview.

“Our aim is to keep building on that momentum,” says Mr. Ma, underscoring that the more the CPP keeps the opposition down, the harder they will fight back.

“That’s going to be the flame that keeps us together. We’re looking long term, we take the Nelson Mandela road.” 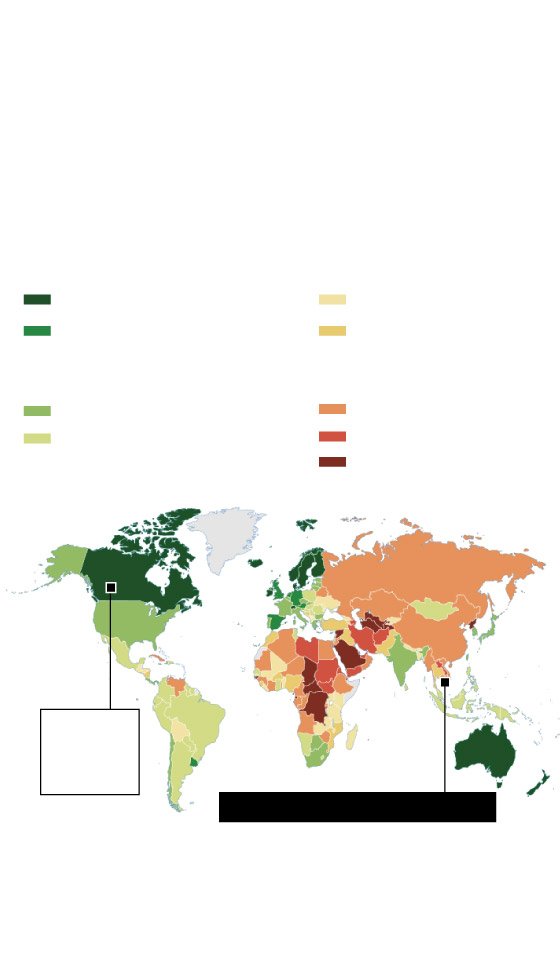 The Economist’s Democracy Index is based

upon five categories such as electoral processes

and civil liberties then scored on a range of

indicators. Finally, each country is ordered based

on its form of government, ranging from full 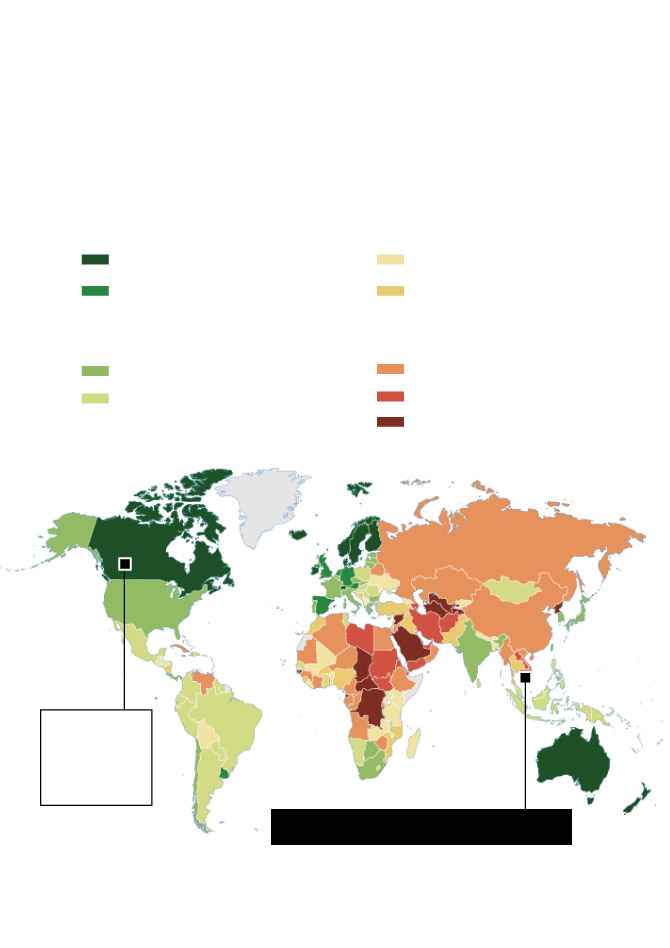 The Economist’s Democracy Index is based upon five

categories such as electoral processes and civil liberties

then scored on a range of indicators. Finally, each coun-

try is ordered based on its form of government, ranging

from full democracy to authoritarian regime. 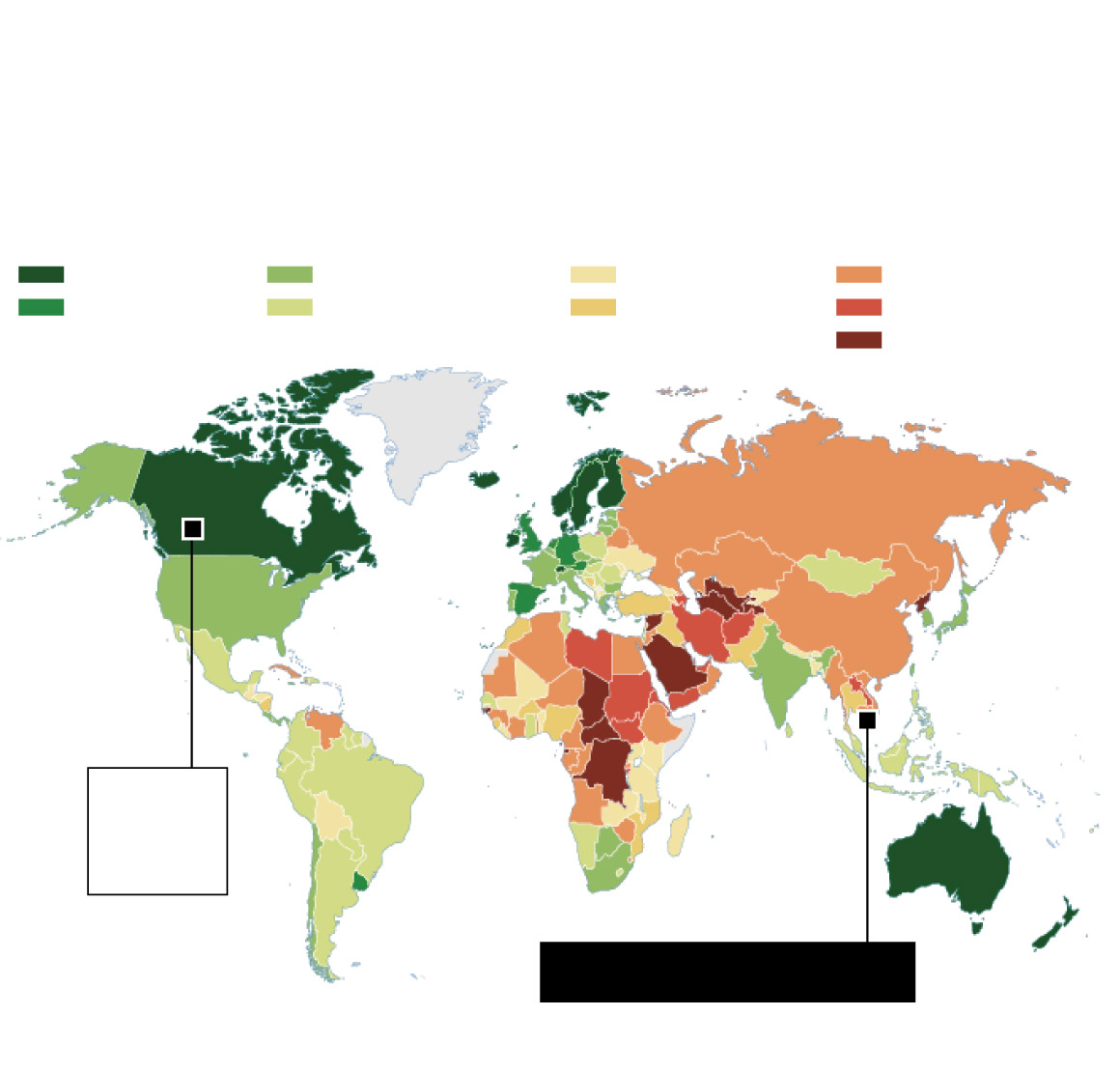 processes and civil liberties then scored on a range of indicators. Finally, each coun-

try is ordered based on its form of government, ranging from full democracy to

THE GLOBE AND MAIL, SOURCE: the economist intelligence unit