Dr. Rimma Kamalova says her hospital’s leadership ignored her warnings about an unexplained pneumonia outbreak back in March. She kept working.

The hospital admitted more than 50 people for planned procedures the day that the staff learned a deceased patient had tested positive for the coronavirus, records show. She kept working.

The hospital was ordered quarantined, with Kamalova and more than 1,200 other staff members and patients trapped inside. Days later, she grew feverish, but she kept working, relying on her own intravenous line for relief.

Russia is hailing its medical workers as heroes, their photographs plastered on billboards and their stories glamorized on state TV. But as the country develops into one of the global epicenters of the disease, those workers are suffering astonishing levels of infection and death in their ranks.

And as the number of reported coronavirus cases in Russia grows, many fear the worst is yet to come.

A website memorializing health care workers who have died during the pandemic lists more than 180 doctors, nurses, paramedics and others.

At one top Moscow hospital, a department head said that 75% of the department’s staff was sick. In St. Petersburg, 1,465 health care workers have caught the virus, the governor said Wednesday, accounting for more than 1 in 6 of the city’s total cases.

Like their colleagues in much of the rest of the world, many of those doctors and nurses are suffering from a shortage of protective gear and equipment. But Russian health workers are also at the mercy of a convoluted, depersonalized and unforgiving bureaucracy that increasingly appears outmatched by the pandemic.

An internal federal government document obtained by The New York Times illuminated Russia’s lack of preparedness. In late March, regional Russian officials were sounding alarm bells about a drastic undersupply of protective equipment and pervasive confusion about how they were supposed to tackle the virus.

Those problems still have not been fully resolved. Now, six weeks later, even doctors at Moscow’s top hospitals are reporting nearly overwhelming levels of infection among their colleagues.

“I think that, as of today, I know a handful of people who have not been sick,” Dr. Evgeny Zeltyn, a cardiologist at a Moscow hospital, said.

Zeltyn said he had been lucky: He was at work when he collapsed with a fever of 102 degrees. He received treatment right away, spent the night in his hospital as a patient and was back at work within five days.

Doctors say they are hampered not just by a lack of equipment and protective gear but also by a rigid, top-down governing system that discourages initiative and independent thinking. Medical workers who have spoken out have faced pressure from authorities; three doctors who tangled with their superiors over working conditions fell from windows in recent weeks, though even the Alliance of Doctors, a medical worker activist group highly critical of the government response, has described those as possible stress-related suicides, not homicides.

“People in administrative positions generally don’t know how to make decisions — they know how to carry out orders,” said the doctor who had said that 75% of their department was sick, who would speak only anonymously for fear of retribution. “And they keep getting contradictory orders.”

The contradictions in Russia’s coronavirus response start in the Kremlin. A nationwide lockdown came to an end Tuesday on orders from President Vladimir Putin, even as Russia was reporting about 10,000 new cases daily. Its total of 252,245 confirmed infections exceeds that of any other country except the United States.

Russia has reported 2,305 coronavirus deaths, almost certainly an undercount, given widespread reports of faulty testing and other causes of death being recorded for patients who died of COVID-19, the disease caused by the virus.

Russian officials, however, insist the country is now well prepared, with a large reserve of hospital beds and ventilators, and widespread testing that is identifying many asymptomatic carriers of the virus. They have criticized the Western news media, including the Times, for casting Russia’s pandemic response in an excessively negative light.

The pandemic has also hit doctors and nurses in Western countries, but the number of medical workers’ lives lost in Russia appears disproportionately high as a share of the overall national death toll. In Britain, at least 275 health and social care workers have died, out of a total of more than 30,000 coronavirus-related deaths in the country.

Underlining the risks of Russia’s often chaotic scramble to fight the virus, an intensive care unit caught fire at a St. Petersburg hospital Tuesday, killing five COVID-19 patients, and a similar blaze at a Moscow hospital Saturday killed one. The preliminary cause of both fires: an overloaded ventilator.

For much of this year, Russia seemed to be in an enviable position as the pandemic raged through Western Europe. The government appeared to recognize the dangers of the virus early on, closing much of Russia’s 2,600-mile land border with China in January. Two months later, Russia was still recording fewer than 100 new cases a day, and Putin said the virus was “contained” and the situation “under control.”

But behind the scenes, Russian regional officials were making it clear to the Kremlin that the situation was not under control — and that the medical system was ill equipped to cope with the pandemic, despite having had two months to prepare. By late March, at least 28 of Russia’s 85 regions were reporting severe shortages of protective equipment, ventilators and testing materials, according to a region-by-region list of challenges compiled by the federal Emergency Situations Ministry and dated March 29.

The 24-page document, described earlier by Russia’s Kommersant newspaper, was provided to the Times by the Alliance of Doctors and confirmed as authentic by the ministry’s press office. The document was prepared as an overview of the regional obstacles in the pandemic response, the ministry said in a statement.

In addition to supply shortages, the document reveals confusion among regional officials over what they were allowed and expected to do to try to limit the spread of the virus. Federal directives carried “diverging interpretations with diverging indicator criteria and implementation deadlines,” officials in the Tomsk region in Siberia said.

Regions described delays in receiving coronavirus test results and information about travelers from abroad, and confusion about their authority to shut down businesses, limit train travel and punish quarantine violators. Several said they did not know where they would get the money to finance the additional medical expenses.

“Specifics are lacking as to how medical workers working in the hotbed of the epidemic will be paid,” officials from the Vladimir region in central Russia wrote.

A Tomsk government spokeswoman had no immediate comment; the Vladimir region did not respond to a request for comment. Two other regions, Mari El and Oryol, said they were now better prepared in terms of protective equipment and hospital beds.

Some doctors have said that financial considerations, coupled with limited protective equipment and leadership failures, helped cause one of Russia’s worst coronavirus outbreaks, the one that trapped Kamalova and 1,200 others in the hospital in Ufa, in the region of Bashkortostan.

Kamalova and another department head at the hospital said the signs of an outbreak, such as a spate of pneumonia cases, were apparent well before the quarantine was imposed April 6. But the hospital continued to admit patients for planned procedures up until April 6, according to records a doctor provided to the Times.

Critics ascribed the decision to admit patients — which ended up exposing more people to the outbreak inside the hospital — to the leadership’s effort to maintain the hospital’s revenues.

“The administration is hostage to the numbers,” the second department head said, speaking on condition of anonymity for fear of retribution. “This was a failure of the system.”

The health ministry of Bashkortostan is investigating reports of earlier cases of pneumonia at the hospital, a spokeswoman for the regional government said. Nine COVID-19 patients have died at the hospital, she said, none of them health workers. She said the government could not comment on any financial motives in the hospital leadership’s actions and noted that the planned patients admitted April 6 had arrived before the quarantine was put in place.

“Medical workers continued to work in near-wartime conditions,” the spokeswoman said, describing the state of the hospital during quarantine. “The mood has now gotten better, and the doctors are prepared to keep working.”

Within days of the lockdown, doctors and nurses started falling ill, according to interviews with five people who were inside the hospital during the quarantine. Wards on the second floor were set aside for sick medical workers, but it was not enough. In one case, patients staged a protest when doctors and nurses were hospitalized in an adjoining room.

Reinforcements arrived from other clinics in the region, and the sick medical workers gave the new arrivals a crash course in treating the coronavirus. Some nurses-turned-patients set intravenous lines on each other rather than entrusting their colleagues from outside clinics to do the job.

“You didn’t realize how this transpires, how bad this can get,” one medical worker said, describing the experience of catching the coronavirus on the job, “when they don’t know what to do about it.”

Putin says fourth minister had coronavirus as number of cases in Russia surpasses 250,000
May 14, 2020 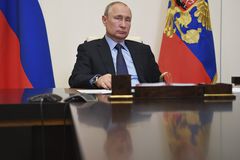 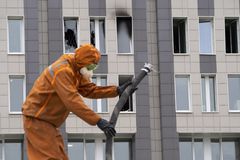 Russia surpasses France and Germany in number of coronavirus cases after record daily rise
May 7, 2020 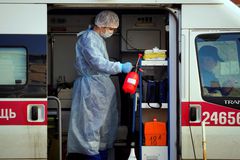