Susana Claure leans over a notebook of names under a ray of midday light streaming through an open door.

She is behind a face mask and a plastic visor, in a soup kitchen that is as young as the pandemic in the impoverished neighbourhood of Bajo Flores, deep in Argentina’s capital city. A metal ladle clanks out of a cauldron as another similarly dressed woman pulls out half of a canned peach.

“Quien sigue?” Who’s next, Ms. Claure calls out to the figures standing a metre or two apart outside of the kitchen run by the Frente de Organizaciones en Lucha activist group.

Next to each name in her notebook is a number that denotes how many food rations that person is entitled to, and next to it are five columns – one for each weekday. At the bottom of one page is a tally: 53 families, 167 rations. “We organized this because we saw the need,” said Ms. Claure, 40, standing at her post surrounded by fellow workers, most of them women.

She migrated to Argentina from Bolivia 23 years ago and has eked out a living in the informal economy, one of the sectors most vulnerable to the pandemic’s toll, and which represents around half of the work force here. Ms. Claure contracted COVID-19 mid-pandemic, along with her husband and their 14-year-old son, the oldest of their three children. Everyone has recovered.

“Even among ourselves, there wasn’t any work,” said Ms. Claure, a seamstress. “We didn’t know where we were going to get our food from.”

It’s a common worry in a part of the world where large swaths of its inhabitants struggle to survive, especially during this pandemic. The area comprising Latin America and the Caribbean was first called the epicentre of the pandemic by international agencies at the end of May. A long list of structural issues, including high levels of poverty, inequality, informal working conditions and underfunded health care systems created a perfect breeding ground for an infectious disease.

Late last week, the region had recorded more than 6.9 million cases – more than one-quarter of all cases worldwide, even though it represents 8.5 per cent of the global population. Authorities say more than 266,000 people have died from COVID-19 in the region. But the full scale of the outbreak is not yet clear: A recent study out of Brazil’s Sao Paulo Medical School estimated that cases in Brazil, the largest country in the region which also accounts for more than half of its tally, could be five times higher than reported. 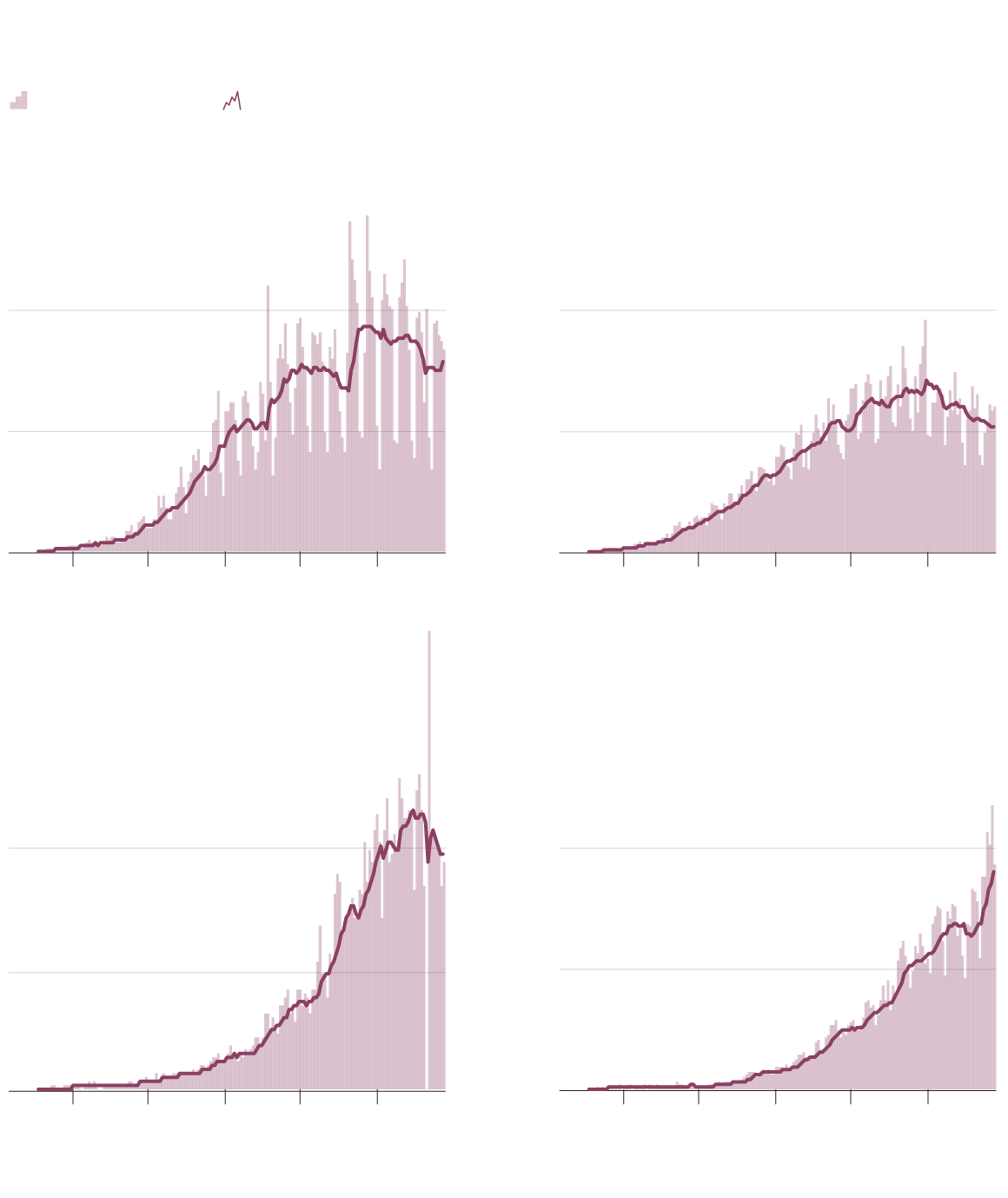 The Economic Commission for Latin America and the Caribbean and the Pan American Health Organization say the pandemic is unleashing “an unprecedented economic and social crisis which, if urgent measures are not taken, could transform into a hunger and humanitarian crisis” in this region.

The organizations estimate a regional drop in growth of 9.1 per cent this year. Unemployment will rise to 13.5 per cent and poverty will climb seven percentage points, to a whopping 37.3 per cent of the population. That means 45 million more people could slip under the poverty line, for a total of 231 million. Historic gains made in the first decade of the 2000s to shrink the gap between rich and poor will be lost, a joint July 30 report by ECLAC and PAHO predicts.

While there are common themes, the vastness and diversity of Latin American is also reflected in the challenges each country faced and how it responded.

Peru, for example, had a robust economy, but weak health infrastructure, and challenges getting financial aid to the millions of people who survive day to day. Many of them are without bank accounts, or fridges that permit them to shelter in place for extended periods of time, exacerbating the problem. In Brazil, President Jair Bolsonaro mocked and worked to undermine quarantines imposed at a local level as coronavirus cases skyrocketed, but his emergency payments to the poor have boosted his popularity. Meanwhile, the small nation of Uruguay managed to have among the lowest levels of contagion in the world without an official lockdown.

Argentina, population 45 million, benefits from one of the better funded health care systems in the region, even if it’s fragmented into public, private and the social security sector, with the public one considered the most inferior. But the country was in the worst position economically – outside of Venezuela – when the pandemic struck. Notorious for boom-and-bust cycles, the country had been clawing through a protracted recession. Inflation was skyrocketing again – to more than 55 per cent in 2019 – poverty was up, and a debt crisis loomed large.

President Alberto Fernandez placed the country in a strict and mandatory lockdown relatively early, on March 19. By and large, people followed the rules. But as the months dragged on, political consensus began to fray and tolerance for social isolation has run thin. Authorities have eased the quarantine, but restrictions remain on social gatherings, travel and sectors such as the restaurant industry. All this as the country has been adding thousands of new cases a day for weeks, with a high mark of 10,550. More than 408,000 cases have been reported, and around 8,500 people have died. “We’re very far from having won the battle,” the President said in a weekend interview.

One bright spot is that Argentina was able to restructure US$65-billion in foreign debt this month, staving off a further economic descent. But Argentine economist Martin Kalos says the country is facing a storm on many other fronts and he is especially worried about wide sectors of society that have been stuck in a quicksand of structural poverty, precarious employment or no work at all for years.

About half of the country’s children live under the poverty line, a number that UNICEF says will hit 63 per cent by year-end. “We’re going to have peaks of poverty, unemployment, inequality, that we haven’t seen since the worst crisis in Argentina,” he said, referring to the financial collapse of 2001 that hurtled the country into chaos. “[The pandemic] is delivering a harsh blow on a foundation that has already deteriorated.”

The Argentine government produced a raft of measures to try to arrest the economic decline. It boosted child subsidies to the poor, it introduced a family emergency income for informal workers or the self employed who lost all their income because of the quarantine, it banned evictions until the end of September, forbade companies from firing employees for the duration of the quarantine, and committed to temporarily paying half of the private-sector wages.

Mr. Fernandez says growing poverty is an urgent issue that the government has tried to address, and he is buoyed by “some indications that the economy is recovering.”

“If you’ll recall, when all of this happened, the usual pessimists said there would be looting, things that did not happen. If it didn’t happen it’s because the help from the state was there,” he said in a recent interview.

Still, the monthly emergency benefit, which works out to the equivalent of about $180, is not enough to live on, and other interventions couldn’t prevent thousands of businesses from closing.

During the pandemic, the number of people relying on the state for a daily meal jumped from to 11 million from eight million, the government said.

The Catholic University of Argentina estimates that poverty – defined by the government as those who cannot afford a basic basket of goods – will hit 45 per cent this year.

Rafael Carro sat huddled at a Buenos Aires street corner, near the famous obelisk that graces postcards. He is 76 and a shoe shiner who has been polishing shoes for 30 years. Before that, he worked in sales in a veterinary clinic for another 30. “I wanted to learn my father’s trade, who was a shoe maker. I learned on my own. There isn’t much to it,” he said, one recent Monday, the first day he had returned to his post in months. He had set up his station, complete with stained brushes and rusted pots of shoe polish that were there for the ambiance rather than use. Two of his regular clients had been by for a shine.

“I’m here because my retirement is not enough,” he said. “Not much has changed because the money wasn’t enough before, and even less now.”

Business is slowly resuming, but parts of Buenos Aires, especially the frenetic commercial core and areas popular with tourists, are shadows of their former selves – such as Florida Avenue, where Marcela Contrera delineated the domino effects of merchants unable to sell, and landlords unable to collect rents. She works for a company that owns real estate and a clothing store in the core. She counted her family lucky, because their basic necessities are still being met. “We had to make a list of priorities and the reality is that, in four months, we couldn’t get past the first [priority],” the 45-year-old said. “Paying for my children’s private school was in the No. 2 spot, because first was health insurance.”

It will take years to make up for the employment lost in the pandemic, predicted Dr. Kalos, the economist and a director at Buenos Aires-based Epyca Consultores. The government has promised a 60-point plan to reactivate the economy but Dr. Kalos worries that Argentina simply won’t have the necessary resources to end the merry-go-round of crises. “We can’t get out of this without knowing that as a society, and as the state, we’re going to have to keep supporting families that have been hit hard,” he said.

The government has recently introduced other measures, including a freeze on internet, TV and mobile service prices, and has proposed a one-time “solidarity” tax on the wealthy to drum up revenue during the crisis.

The nature of feast or famine cycles in Argentina has also honed a survival skill. “Lo atamos con alambre” – we’ll tie it up with wire – is a common phrase here, capturing the resourcefulness and ingenuity of a society pushed many times to the edge. That is evident now, in the pandemic.

“Not everything is negative in life,” retailer and immigrant Lisandro Guedez said. “When these kinds of crossroads occur, it allows you to reinvent yourself. To use a word that is being used a lot now, it triggers you to come up with new ideas.”

The 43-year-old Venezuelan knows a thing or two about that. He left his homeland three years ago, part of a wave of migration that fanned out across Latin America in search of a better quality of life and an income to send back to his family.

His sports clothing store on busy Viamonte Street in Buenos Aires’s core was doing well before the pandemic forced it closed. So he regrouped, took a trip to the Central Market where wholesale produce is bought and sold and scouted out a plan to sell fruits and vegetables, applying the lessons he had learned over eight years as a clothing store manager in Caracas: attractive marketing, quality products, and good customer service.

“Since we started it has gone well,” he said. “Because it’s food. Let’s be clear, what people are looking for right now is food.”