Brazil is taking stock of life after Lula: The former president who had a profound impact on its modern history began a 12-year jail sentence on the weekend.

Luiz Inacio Lula da Silva, known universally by his nickname, rose from poverty to the presidency and worked to improve the lives of the most marginal Brazilians − but allowed his government to shield a vast system of kickbacks for public contracts that enriched politicians and fueled his and other parties.

The former president − the highest-ranking person yet to be ensnared by the corruption probe known as Lava Jato − turned himself over to police at the Sao Paulo headquarters of the metal-workers’ union where he began his career. It was the end of a chaotic drama that transfixed the country for days, after Mr. da Silva, 72, lost a petition to the Supreme Court to avoid prison.

When he was delivered by helicopter to the southern city of Curitiba Saturday night, police clashed with his supporters and nine people were injured.

Many Brazilians heralded the sight of a once supremely powerful figure taken in police custody as a turning point for the country, a blow against impunity of the powerful and a demonstration that none are above the law.

But to others Mr. da Silva’s arrest is a devastating end to an era of a different kind of politics. “He brought a power to the Brazilian poor – people were lifted above the poverty line, people who had never had any education started to study, domestic workers got rights when before they were all but enslaved,” said Elisa Lucinda, a prominent actor, poet and singer. “It was a Brazil that had never been seen before and now will disappear again.”

Some 30 million people moved out of poverty during the eight years Mr. da Silva was in power. While the country’s business leaders feared his leftist rhetoric before he was elected, he soon won their enthusiastic support, extending low-cost government credit and liberalizing banking. He presided over a flourishing economy, as Brazil grew on surging commodity prices.

He implemented a series of redistributive policies, including significant hikes in minimum wage, and a conditional cash grant to the poor. His government brought in controversial affirmative action programs for public universities that for the first time enrolled significant numbers of black and mixed-race Brazilians.

It was this history that Mr. da Silva invoked in a speech to the crowd before he was taken into custody, suggesting he has been targeted for prosecution by an elite that resents his effort to shift power in a famously unequal country.

José Murilo de Carvalho, one of Brazil’s most prominent historians, called the sight of Mr. da Silva in prison ”a sad chapter in our history.”

“He had such an important role in our political life, with two successful terms that involved something that had never occurred in our history, a focus on the social, on inequality,” he told the news website UOL.com.

But Mr. da Silva and his party failed ethically, Prof. de Carvalho said, and are now facing the consequences.

This is not Mr. da Silva’s first experience of jail: In 1980, he was arrested by the military dictatorship that then ruled Brazil and detained for a month as punishment for organizing pro-democracy strikes.

He was, from the outset, a decidedly different politician in a country with a small political elite drawn from the landed and wealthy. Mr. da Silva grew up poor in the drought-stricken northeast, one of nine children brought to São Paulo by his desperate mother after his father abandoned them. He did not finish primary school, got work in a factory where he lost a finger in an accident (his four-fingered wave would become a sort of symbol) and rose in the ranks of union leadership.

He made three unsuccessful efforts at the presidency before he was elected in 2002. When he left office eight years later, restricted by term limits, he had a personal popularity of more than 80 per cent.

Although he faces charges in six more corruption cases, Mr. da Silva continues to lead polls for the October presidential election. The Workers’ Party said Mr. da Silva would continue to be its candidate − party president Gleisi Hoffman said he would be “a political prisoner” − but in practical terms, this ends his candidacy. The party will likely now name another candidate, anointed by Mr. da Silva − but there is a paucity of figures with either his charisma or his public profile.

Prosecutors say Mr. da Silva was the unrepentant head of a vast network of graft that siphoned millions out of public coffers and into party and personal bank accounts; many senior figures in the Workers’ Party, including Ms. Hoffmann, are indicted or have been convicted on corruption charges in Lava Jato. In a separate corruption scandal that played out while Mr. da Silva was in office, members of his government made hefty payouts with state funds to buy the votes of members of his congressional coalition.

“It’s a historic day in Brazil: Finally ex-president Lula, the head of the largest criminal organization that robbed public money, is in prison,” said Alex Manente, leader of the centrist Popular Socialist Party, which opposed Mr. da Silva’s government. “We’re embarrassed to have the world see our former president in jail, but justice is being done, and that’s how we build Brazil.” (Mr. Manente himself is under investigation for receiving illegal campaign donations.)

Mr. da Silva left his supporters saying he was “not afraid” of prison. “I’m not a human being anymore: I’m an idea,” he said. “I’ll go to prison, but all of you will have to become Lula.”

Former Brazil president Lula turns himself in after standoff
1:27
April 8, 2018 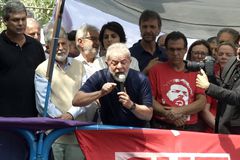