Hours before U.S. President Joe Biden told the world that he expected Russia would invade Ukraine, Ukrainian President Volodymyr Zelensky was delivering his own speech, asking his country to remain calm amid all the war talk.

“Now isn’t the time to panic, to inflame the situation, to buy up buckwheat and matches,” Mr. Zelensky said in a video posted to his website Wednesday.

Experts who have been studying the months-long Russian military buildup around Ukraine (as well as in the occupied Crimean Peninsula) say Mr. Biden’s blunt take is the more realistic one. The consensus among Western and Russian military experts is that the force Russian President Vladimir Putin has assembled is too large to be explained away as any kind of training exercise.

If it’s all a bluff or a bargaining ploy, it’s an expensive one that will leave the Russian leader looking weak if he backs down without securing his stated aim of ensuring Ukraine will never be allowed to join the North Atlantic Treaty Organization.

Since Mr. Biden has ruled out giving Mr. Putin the guarantee he seeks, that leaves analysts expecting some kind of military offensive against Ukraine in the coming days and weeks.

Russia has had an estimated 100,000 soldiers stationed within a short drive of the Ukrainian border (including troops stationed in Crimea, which Russia seized in 2014) since late last year. But military watchers say the number of troops is not the best clue to what’s happening.

A better indicator is the rapid doubling – now approaching tripling – in the number of battalion tactical groups, or BTGs, that Russia has positioned around Ukraine. Russia’s army is broken up into BTGs, flexible units that can change in size and shape according to their mission but usually include a mechanized infantry battalion supported by its own artillery (including mobile rocket launchers), as well as tanks and anti-aircraft systems.

That hardware is being put into place now. The soldiers who will operate the tanks and other weaponry can be airlifted in on short notice – a step that could indicate some kind of assault is imminent. (The movement of troops, unlike the hauling of trainloads of tanks and other equipment, is also relatively easy to hide, particularly if soldiers are flown to the frontline shortly before being sent into action.)

Over the past eight years, as Russia has supported the “separatist” militia fighting the Ukrainian army in the breakaway Donbas region, it has kept a ready-for-combat force of roughly 24 BTGs near the Ukrainian border, according to Polish military analyst Konrad Muzyka.

The number of BTGs in and around Ukraine has now grown to 64, Mr. Muzyka said, including this week’s sudden arrival of 10 in Belarus, which shares its own border with Ukraine. Other analysts – who, like Mr. Muzyka, base their calculations on open sources, including satellite imagery and videos posted to social media – put the number at closer to 70. Some speculate Russia could soon have 100 BTGs in place. 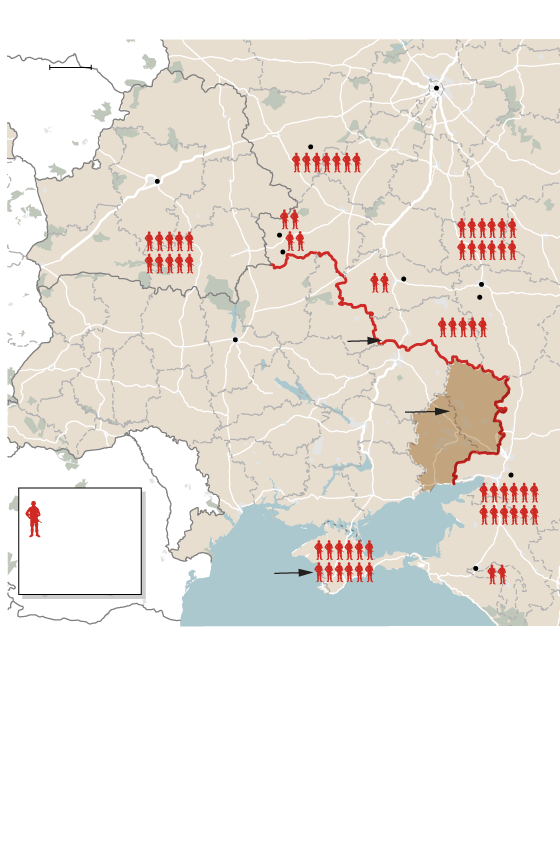 Note: Information above does not include air/naval assets, nor the

armies of the Donetsk and Lugansk “people’s republics.” Ukraine

estimates the “separatists” have about 35,000 troops.

mark mackinnon and JOHN SOPINSKi/ THE GLOBE AND 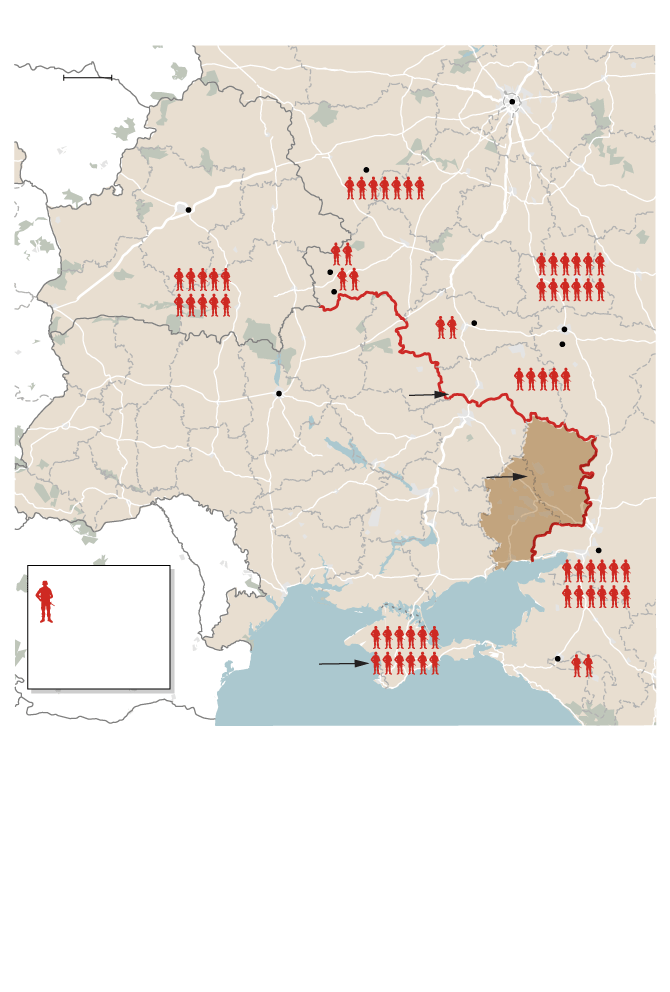 Note: Information above does not include air/naval assets, nor the

armies of the Donetsk and Lugansk “people’s republics.”

Ukraine estimates the “separatists” have about 35,000 troops

mark mackinnon and JOHN SOPINSKi/ THE GLOBE AND 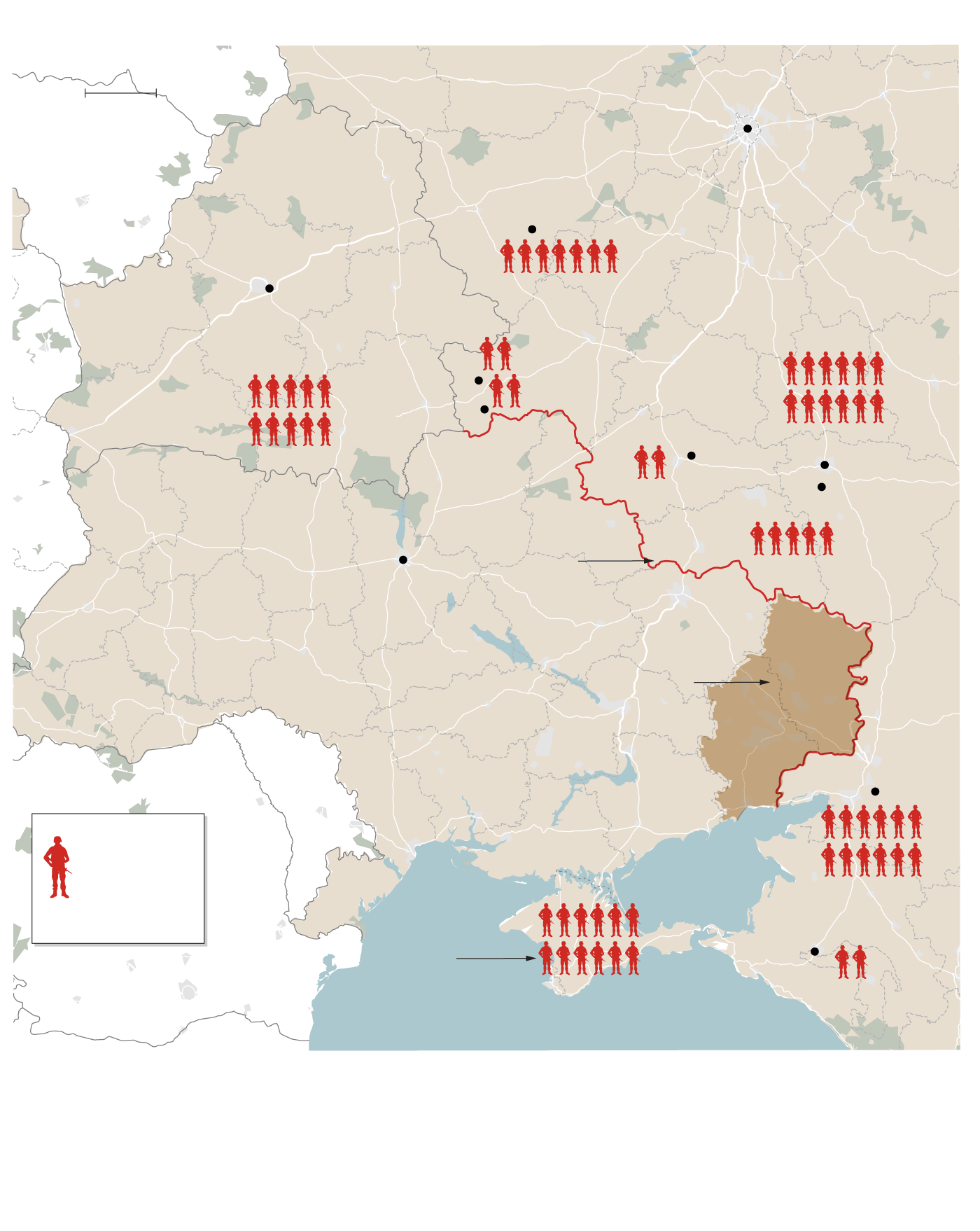 Note: Information above does not include air/naval assets, nor the armies of the Donetsk and Lugansk “people’s republics.”

Ukraine estimates the “separatists” have about 35,000 troops

The move into Belarus is particularly significant because it compels Ukraine’s military, already stretched thin on the eastern border with Russia and the southern coastline, to defend the country’s northern frontier as well.

Even if the troops in Belarus – which also borders NATO allies Poland, Lithuania and Latvia – are not used against Ukraine, they serve as a warning to NATO: Do not intervene.

“The most ominous deployment is that the forces being deployed to Belarus come from the Russian Far East, from the Eastern Military District. That’s the worst sign. It means there’s a plan right now to concentrate all Russian forces in the west,” said Pavel Felgenhauer, a Moscow-based military expert. “It seems the countdown to war is really happening.”

On Thursday, Russia again escalated tensions by announcing large-scale snap naval drills. Some 140 warships and support craft will take part in the exercises in the Pacific and Atlantic oceans, as well as the Mediterranean Sea and the Sea of Okhotsk.

White House spokeswoman Jen Psaki said this week that a Russian invasion of Ukraine could happen “at any point,” but those who study the movements of the Russian military say it’s more likely any attack is still a couple of weeks off.

One indicator of the potential timeframe for an assault is the departure of six Russian landing craft from the Baltic Sea this week. Those boats, which could be used to launch an amphibious assault on Ukraine’s Black Sea coastline, specifically the port of Odessa, are now circling Europe and likely won’t be in position to take part in an attack until closer to the end of January.

Another key signal is that the soldiers to operate the tanks and artillery pieces of the BTGs are not yet at the front. That’s why the estimated number of Russian soldiers has remained at about 100,000 since late November, even as hundreds of videos have emerged since then showing trainloads of military gear travelling west across Russia’s 11 time zones. Before an attack, the number of troops near Ukraine’s border could rapidly double. “Once we see people moving in and equipment being rolled out, that’s going to be a very ominous sign that something is going to happen,” said Mr. Muzyka, the director of Rochan Consulting, a Warsaw-based defence research firm. “Russia will try to achieve strategic surprise – once they start rolling, they’re not going to stop.”

Most analysts had expected that any military action would be focused on eastern Ukraine, up to the Dnieper River, which bisects both the country and the capital. The arrival of Russian forces in Belarus opens the possibility of a rapid assault on Kyiv coming from the north.

Rob Lee, a Russian military expert at the Philadelphia-based Foreign Policy Research Institute, said that while the growing Russian force could be used to seize and occupy large parts of Ukraine, he believes it’s more likely Russia will employ tactics similar to those it used in the 2008 invasion of Georgia, another former Soviet republic that Mr. Putin wanted to keep from joining NATO. In that scenario, Russia would use its air force, long-range artillery and ballistic missiles to attack the Ukrainian military from a distance, then move ground forces in to force a surrender on Mr. Putin’s terms.

Michael Kofman, the director of Russia studies at the Center for Naval Analyses, said Russia would likely avoid entering major cities because “urban warfare really sucks up forces and would be really destructive and difficult.” Instead, he predicted Russian forces would aim to encircle Kyiv to provoke the capitulation of the government.

Ukraine, of course, will resist any new Russian invasion. “It doesn’t matter what the Russian Federation’s plans are. The armed forces will do their job and fulfill their duty,” Lieutenant-General Valeriy Zaluzhnyi, the commander the Ukrainian military, vowed this week. Thanks to its co-operation with NATO, Ukraine’s military is better trained and has much better equipment than it did eight years ago, when Russia seized Crimea. Many in the country’s 150,000-strong army are battle-hardened veterans of the conflict in Donbas.

But experts say Ukraine’s military will likely still be overwhelmed by the force being assembled around it. “Can Ukraine withstand the onslaught?” Mr. Muzyka asked. “Looking at satellite imagery, the capabilities that Russia has gathered, Ukraine will be overstretched and really hard-pressed to stop it.”

Russia’s Ukrainian standoff: More from The Globe and Mail