Sitting on a plush couch in the middle of a spacious living room, Carles Puigdemont hardly looks like someone on the run from police in Spain, where he’s wanted for rebellion and faces up to 25 years in jail.

The former president of Catalonia spends his days in a comfortable house on a quiet street in Waterloo, a suburb of Brussels best known as the scene of Napoleon’s last stand. He fled Barcelona in October, 2017, narrowly escaping Spanish police who were rounding up Catalan leaders after they’d announced the region’s independence from Spain, an act Madrid declared illegal. Mr. Puigdemont and a group of cabinet ministers headed to Brussels, leaving behind their families and 12 colleagues, who were apprehended and charged with rebellion, sedition and misusing public funds to pay for the referendum.

The Spanish government has tried repeatedly to extradite Mr. Puigdemont and the others, but it recently gave up and police are now waiting to pounce if they ever set foot in Spain. “I am not hiding, the police know where I am,” the ex-president said, looking relaxed and dapper in a blue suit and open-neck white shirt.

Indeed, even though he’s in exile, Mr. Puigdemont continues to play an active role in the Catalan independence movement. He delivers speeches across Europe, holds daily conference calls with supporters and has launched a bid to win a seat in the European Parliament next month, hoping the larger platform will draw more attention to the nationalists’ ambitions.

But he also remains a divisive figure in Spain, where the issue of Catalonia’s separation has caused a national uproar. On Sunday, Spaniards head to the polls in a snap general election, and they’ll choose between those who want to punish separatists such as Mr. Puigdemont and others who say it’s time for dialogue. Mr. Puigdemont’s party, Together for Catalonia, or JxCat, is running candidates across the region and it could play a critical role if the election results in a hung parliament, which most polls predict.

The Waterloo house has been turned into a kind of foreign headquarters for Catalan separatists. A sign near the front door reads “Casa de la republica” and inside, the walls are lined with nationalist posters, books on Catalonia’s history and cultural mementoes, including the model of a 10-level castell, or human tower – a Catalan tradition that dates back centuries. He’s supported by donations and assisted by a team of aides who bustle in and out of the building. “I hope each day I can return [to Catalonia],” he said in French, the language we settled on for this interview. “But I am a realist. I am working so that it’s as soon as possible.”

He insisted that even though the actions his government took in October, 2017, failed to create a nation, they brought national and global attention to the independence cause. “It’s true that our path to independence … is a long road that requires a lot of time,” he said. “But it’s also true that we’ve started on that path. And that, de facto, today we are more sovereign than a year and a half ago because the recognition of Catalonia as a de facto political entity exists. Everyone knows there’s an issue in Catalonia and that something has happened.”

Others are more circumspect and argue that Mr. Puigdemont’s rush to declare independence after a contentious referendum forced Madrid’s hand and set back the sovereignty movement. The referendum saw 92 per cent of voters back independence, but many of those opposed to sovereignty boycotted the poll and only 43 per cent of eligible voters cast ballots. Instead of treating the result as advisory, Mr. Puigdemont took it as an endorsement and ignored warnings the referendum violated the constitution. The Spanish government reacted by declaring the vote illegal, briefly imposing direct rule from Madrid and arresting the ringleaders. In a subsequent regional election, JxCat and other nationalist parties faced a backlash. The nationalist coalition barely won a majority in Catalonia’s regional parliament and it lost the popular vote to parties opposed to independence. The nationalists “went for everything, and then they got nothing and they remain divided among themselves with very different strategies,” said Jose Ignacio Torreblanca, head of the Madrid office of the European Council on Foreign Relations, a political research group.

The issue of how to deal with Catalan separatists is now at the forefront of the national election campaign and it has unleashed a fierce debate about Spain’s future. It has also fuelled the rise of Vox, a populist right-wing party that has vowed to crush Catalan sovereignty. Sunday’s election “is more or less a referendum on which way we should go on Catalonia,” Mr. Torreblanca said. “Should you punish them for having tried, illegally, to break up the country? Or should you accommodate and appease and bring them back in tune?”

The outcome of the election is far from certain but the best guess is that the Socialists, led by Prime Minister Pedro Sanchez, will win the most seats and try to cobble together a coalition. Mr. Sanchez has been receptive to talking with Catalan separatists and he’s indicated that he’s prepared to offer more autonomy to the region, which is among the most prosperous in Spain and drives much of the country’s economy. But he’s ruled out independence or another referendum on sovereignty. The parties on the right – Vox, the People’s Party and the Citizens Party – have attacked Mr. Sanchez’s approach and pledged to crack down on the secessionists by taking powers away from Catalonia, especially in areas such as regional education, which many on the right complain treats Spain like a foreign entity.

There are fears that because the issue is so divisive, Spain will endure years of political uncertainty. “This will be some sort of battle until exhaustion,” said Miguel Otero, a senior analyst at the Elcano Royal Institute, a Madrid-based research group. “The Catalan separatists have a weaker hand, and my worry is that we will have in Spain what you had in Canada; this Quebec effect where Toronto slowly gained a lot of business out of Montreal, so that Barcelona gradually, slowly, loses this business attraction that it has. That would be sad for Barcelona and for Spain as well.”

Mr. Puigdemont won’t say if his party will back a Socialist coalition if Mr. Sanchez wins the most seats. Catalan’s nationalist parties were instrumental in bringing Mr. Sanchez to power last year by supporting the Socialist coalition when it ousted the People’s Party government. But they fell out in a dispute about the budget and the nationalists brought down Mr. Sanchez’s government in February, prompting Sunday’s election. “It’s up to [the Socialists] to say if they will continue with the same line of past governments and ignore the reality of Catalonia, or if it’s the moment to have courage,” Mr. Puigdemont said. “As long as Spanish politics continues to ignore the reality of Catalonia there will be political instability.”

There are other nationalists who take a different position, and Mr. Puigdemont is facing emerging rivals as de facto leader of the independence movement. One of them is Oriol Junqueras, a former vice-president of Catalonia who heads a nationalist party called the Catalan Republican Left. Mr. Junqueras was among the 12 former cabinet ministers arrested in 2017 and thrown in jail. He and the others are now on trial, and the court proceedings have been broadcast daily, drawing impressive viewership and giving Mr. Junqueras a rising profile. He recently held a news conference from his jail cell to outline his party’s policies and announce that he would work with the Socialists. He’s also running against Mr. Puigdemont for a seat in the European Parliament. “Every day [Mr. Puigdemont] fades away, he’s not relevant in Catalonia any more,” Mr. Torreblanca said. “The minute [Mr. Puigdemont and Mr. Junqueras] proclaimed independence, they didn’t have a plan, they split and they’ve been fighting each other ever since for the supremacy of the movement.”

He also defended his choice to leave while others stayed and faced charges. “I don’t feel guilty,” he said. “At the moment now, I am here to give voice to those who can’t speak. To tell people what is happening in Spain.”

As he gave a quick tour around his living room, Mr. Puigdemont, 56, talked passionately about Catalonia’s separation and held up Quebec as an example. He’s long admired Quebec sovereigntists and he hopes to visit the province as a separate country one day. He also praised the Canadian government for allowing two referendums on Quebec independence. “Our model is a referendum like in Quebec where the result is respected,” he said.

For now, he remains a president in exile, stripped of his power and trying to manage his political fortunes from afar. He misses his wife and two daughters, who visit every few weeks, but vows to continue the quest for nationhood. When asked about the image of living in Waterloo, where Napoleon met defeat, Mr. Puigdemont smiled and replied: “We take a different point of view. Waterloo wasn’t only about Napoleon, it was about Wellington, too. And it was Wellington who won.” 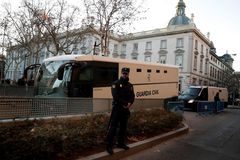 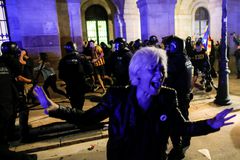 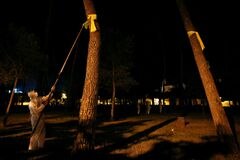