At least seven people were killed and dozens were wounded in clashes in Iraq on Wednesday as security forces fired live ammunition and tear gas for the second day to disperse anti-government protesters demanding jobs, improved services and an end to corruption.

The deaths brought the overall number of protesters killed in two days of violence to nine. Protests on Tuesday had left two dead – one in Baghdad and another in the city of Nasiriyah – and over 200 wounded.

The renewed clashes occurred despite a massive security dragnet mounted by the government in an effort to quash the economically-driven protests.

Hundreds of heavily armed security forces and riot police deployed on Baghdad streets, blocking all intersections leading to a major central square Wednesday to prevent a repeat of Tuesday’s protests. Parked armoured personnel carriers and SUVs stood guard and by mid-afternoon, residents said authorities had shut down social-media platforms such as Facebook, Twitter and WhatsApp.

Groups of protesters continued to take to the streets, some of them calling for toppling the government. Thick black smoke hung over the city as demonstrators set fire to tires and garbage containers. Bursts of heavy gunfire could be heard intermittently.

The confrontations spread to at least seven other provinces in the country, with an estimated 3,000 protesters taking to the streets in the southern city of Basra on Wednesday evening. Protests and clashes were also reported in Najaf, Nasiriyah, Waset, Diwaniyah and in other places.

The violence was some of the worst between protesters and security forces in Iraq, signalling that the war-weary country could be facing a new round of political instability. Iraq has been caught in the middle of U.S.-Iran tensions in the Middle East, putting an additional strain on the weak government in Baghdad that plays host to thousands of U.S. troops and powerful paramilitary forces allied with Iran.

The U.S. Embassy in Baghdad called for restraint from all sides. “The right to demonstrate peacefully is a fundamental right in all democracies, but there is no place for violence in demonstrations from any side,” it posted on Twitter.

The protests, organized on social media, started in Tahrir Square on Tuesday, initially driven by economy woes. They began peacefully, calling for an end to corruption, improved basic services and more jobs. But they soon turned violent after security forces fought back against demonstrators with water cannons, tear gas and live ammunition.

Protesters responded by calling for toppling the government, throwing stones at security forces and setting tires and trash containers on fire. At least two protesters were killed and more than 200 were wounded.

A few dozen protesters tried to reach Tahrir Square again on Wednesday morning but were met with scores of riot police who formed a human barrier and soldiers who blocked roads, sometimes with barbed wire. Security forces again fired tear gas and live ammunition into the air to disperse the protesters, chasing them away, according to officials.

Saadoun Street, a major commercial thoroughfare leading to Tahrir Square, was deserted and all the shops and restaurants were closed. Smoke could be seen near Tahrir and intermittent gunfire could be heard, as well as ambulance sirens.

“They have transformed Tahrir Square into Tahrir barracks,” said Hussein Saleh, 24. “There are more security forces than there are protesters,” he added, standing with a small placard that read: “I am protesting to take my rights.”

Security and medical officials said three protesters were killed in Baghdad Wednesday and four in Nasiriyah, about 320 kilometres southeast of the capital. All officials spoke on condition of anonymity in line with regulations. In Zaafaraniyah, a 10-year-old girl was also killed when she was hit by a car speeding away from a checkpoint amid protests.

The protests are the most serious challenge to Prime Minister Adel Abdul-Mahdi’s nearly year-old government. The premier held a national-security emergency meeting Wednesday. His office later said the meeting denounced the violence that accompanied the protests and said measures will be taken to protect citizens and public property and that the government will spare no effort to fulfill the demands of the protesters.

Earlier in the morning, municipal workers were spraying Tahrir Square with water while bulldozers removed debris from Tuesday’s demonstrations. A bridge that leads from the square to Baghdad’s fortified Green Zone – home to government offices and foreign embassies – was closed.

Activists drove around in a car, distributing water to protesters and soldiers alike.

“We are not against you, you are our brothers,” one activist told a soldier as he offered him a cold bottle of water.

The protests appear to be spontaneous and without political leadership, organized by people on social media against corruption and lack of basic services, such as electricity and water.

Dozens of university graduates unable to find jobs in the corruption-plagued but oil-rich country also joined the rallies. Politicians denounced the violence and at least one, influential Shia cleric Muqtada al-Sadr, called for an investigation.

Iraq’s interior and health ministries issued a joint statement saying one person was killed in Baghdad on Tuesday and 200 were wounded, including 40 members of the security forces.

The statement said authorities “regretted” the violence that accompanied the protests, blaming “a group of rioters” for inciting violence.

The UN secretary-general’s special representative for Iraq, Jeanine Hennis-Plasschaert, expressed “grave concern” over the violence at the demonstrations in Baghdad and elsewhere.

“Every individual has the right to speak freely, in keeping with the law,” she said in a statement, urging authorities to exercise restraint in their handling of the protests. 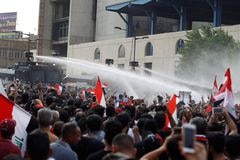