A fatal gun rampage at a kosher grocery store in northern New Jersey this week is now being treated as an act of domestic terrorism and the FBI will oversee the investigation, federal and state law enforcement officials said on Thursday.

Six people, including the man and woman who carried out the attack, three civilians and a police officer died in a series of events that ended in a police shootout on Tuesday in Jersey City, New Jersey, located across the Hudson River from New York City.

“The evidence points toward acts of hate,” state Attorney General Gurbir Grewal told a news conference. “We are investigating this matter as potential acts of domestic terror, fuelled both by anti-Semitism and anti-law enforcement beliefs.”

The U.S. attorney for New Jersey, Craig Carpenito, told the news conference that the Federal Bureau of Investigation would lead the probe.

The four-hour gun battle at the JC Kosher Supermarket erupted after two assailants shot the police officer at a nearby cemetery and then fled in a white van. It ended after police crashed an armoured vehicle through the wall of the market. Authorities on Wednesday said that the pair had targeted the kosher grocery store, heading there deliberately after leaving the cemetery.

On Thursday, authorities said they were examining social media posts and other evidence to learn more about the motives of the attackers, who they said had expressed interest in the Black Hebrew Israelites, a group unaffiliated with mainstream Judaism and some of whose offshoots the Southern Poverty Law Center lists as hate groups. Authorities have not established an official link between the shooters and the group, Grewal said.

The attackers appear to have acted alone, officials said.

Authorities on Wednesday identified the shooters as David Anderson, 47, and Francine Graham, 50. The three civilian victims inside the market were co-owner Mindy Ferencz, 31, Douglas Miguel Rodriguez, 49, and Moshe Deutsch, 24, they said.

A fourth person who was in the market escaped after the shooters entered. Officials declined to identify that person.

The slain police officer was identified as Joseph Seals, a 15-year veteran of the force and father of five.

“I think as more info comes out it will be more and more clear not only that this was a hate crime but that the perpetrators had hoped to kill many more people than 4,” Fulop said on Twitter earlier.

Officials said Anderson fired an AR-15-style weapon and Graham was armed with a 12-gauge shotgun as they entered the store. A 9 mm Glock and 9 mm semi-automatic firearm were recovered inside the market, and a .22-calibre gun equipped with a homemade silencer was found inside the U-Haul.

Authorities also said they were working to determine if Anderson and Graham were linked to the killing of an Uber driver in Bayonne, New Jersey, over the weekend. 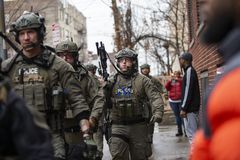