Bank of England Governor Mark Carney has emerged as a leading candidate to take over as head of the International Monetary Fund, one of the most important positions in the global economy.

Mr. Carney is a contender to replace the current IMF managing director, Christine Lagarde, who has been nominated to become president of the European Central Bank. If confirmed by the European Parliament, as expected, Ms. Lagarde would take up the post on Oct. 31 when the current ECB President, Mario Draghi, steps down. Oddsmakers at Betway, an online betting company, and a number of IMF observers have pegged Mr. Carney as having among the best chances of winning the IMF job, given his background and experience.

Based in Washington, the IMF’s main purpose is to ensure the stability of the global monetary system. It provides loans to countries in financial trouble, often under conditions that require the borrowing states to undergo significant fiscal and economic reforms.

A total of 189 countries belong to the organization and contribute funds based on their relative size (votes on IMF matters are also weighted by contributions). The IMF was created in 1944 along with the World Bank, which works largely with developing countries. The head of the IMF has always been a European; four of the past six have been French. The World Bank president has always been an American.

Although Mr. Carney is Canadian, he also holds British and Irish citizenship. That could make him European enough for the IMF’s 24-member executive board, which selects the new boss. He also has a wealth of international experience, having served more than six years as governor of the Bank of England, five years as governor of the Bank of Canada and seven years as chair of the Financial Stability Board, an international body that monitors the global financial system. He is slated to leave the Bank of England’s top job in January.

Mr. Carney “has the CV, the experience and the connections to be seen as a safe pair of hands,” said James Knightley, the chief international economist at ING Group. Mr. Knightley added that there had been indications that Mr. Carney wanted to return to Canada and pursue a career in politics, “but I am not sure that would be as high up on his list now.”

Mr. Carney was touted as a potential IMF chief in 2011, when the job went to Ms. Lagarde. In 2013, he landed at the Bank of England instead.

Peter Dixon, the global financial economist for Commerzbank AG, said Mr. Carney’s experience at steering through the politics of Brexit would also be an added bonus for the IMF. But he’s no shoo-in. “Although he has British and Irish passports, he may face opposition from other continental European countries given his Canadian roots,” Mr. Dixon said.

Mr. Carney hasn’t shied away from controversy during his tenure in Britain. He has faced criticism from Brexit-backers for issuing dire warnings about the economic consequences of leaving the European Union. During the 2016 Brexit referendum campaign, Mr. Carney warned that the country could fall into a technical recession if it left the European Union. In a report last year, the bank said that if Britain crashed out of the EU without a withdrawal agreement, the economy could shrink by as much as 8 per cent within five years and the unemployment rate would nearly double to 7.5 per cent.

That has led to accusations he has politicized the bank. Conservative MP Jacob Rees-Mogg labelled Mr. Carney “a second-tier Canadian politician” and added: “Having failed in Canadian politics, he’s got a job in the U.K., which he isn’t doing well.” Mr. Carney shot back by saying it was his job to point out challenges to the economy.

There are also plenty of European candidates for the IMF job. They include the man who hired Mr. Carney for the Bank of England: George Osborne, Britain’s former chancellor of the Exchequer. Mr. Osborne resigned as chancellor in 2016 after the referendum, which saw 52 per cent of voters back leaving the EU. He had been a leading figure on the Remain campaign and he is now editor of London’s Evening Standard newspaper, as well as an adviser to the giant investment fund BlackRock.

Betway’s top three candidates to win the job, based on odds posted on its website Thursday afternoon, are Mr. Osborne, Mr. Carney and economist Raghuram Rajan, former governor of the Reserve Bank of India. A $100 bet on Mr. Carney would pay out $650 if he gets the job.

Mr. Osborne’s candidacy for the IMF job was met with derision in some quarters on Thursday, given his history as a belt-tightening finance minister. Mr. Osborne “was the worst U.K. chancellor in 300 years,” said economist David Blanchflower, who served on the Bank of England’s monetary policy committee. “He destroyed the nice steady growth he inherited in 2010. … Hard to see how that qualifies him to be boss of the IMF.”

Another potential candidate is Mr. Draghi, although he is 71 years old and the IMF requires that incoming managers not be older than 65. The head of the Bank of France, François Villeroy de Galhau, could also be nominated, along with EU finance commissioner Pierre Moscovici and Kristalina Georgieva, the Bulgarian chief operating officer of the World Bank.

The IMF’s executive directors will submit nominations for the post over the next few weeks, typically on behalf of member countries. The board will then draw up a shortlist of three candidates and interview each one. A final decision is usually done by consensus but the board can opt to pick the winner by a majority vote. 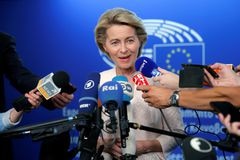 What is the ECB? A look at the central bank Christine Lagarde has been chosen to lead
Subscriber content
July 2, 2019 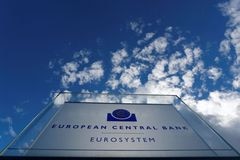 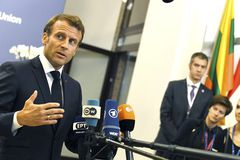