As China plots its response to a White House determined to extract blood on trade, Beijing’s leadership knows it cannot match U.S. military or economic might.

But Chinese decision makers also know they now oversee the the world’s dominant marketplace. China’s retail sales are the highest on earth, worth US$7.5-trillion last year, 14-per-cent higher than those in the U.S.

China is No. 1 in cars, smartphones and any number of other items people buy for themselves. Chinese consumers, in other words, have already collectively become the world’s buying superpower.

And when Beijing wants to retaliate, it has a record of using those buyers, nudged by nationalism and propaganda, to exact a painful toll on rivals. China has done so in recent years to the Philippines, Japan and South Korea, with Chinese consumers participating in boycotts of foreign-made cars, cosmetics and tourist destinations that have inflicted financial suffering on those Beijing wants to punish.

It’s as if the U.S. is cutting flesh from China’s body

Now, China is also prepared to wage a “people’s war” against the United States, the nationalist Global Times, a Communist Party imprint, said in an editorial.

“The patriotism and collectivism of Chinese will be of great use” in this cause, the paper wrote, putting the cost of a trade war in graphic terms.

“It’s as if the U.S. is cutting flesh from China’s body while China beats the U.S. and makes it lose its front tooth. It’s hard to say who will be more hurt. But what we can be sure of this: China’s capacity for pain is greater than that of the U.S.”

Opinion: Canada could be collateral damage in a U.S.-China trade war

Readers on the newspaper’s Twitter-like Weibo account were quick to take up the cause.

“Let’s boycott Apple,” wrote one. “Coca-Cola, Starbucks, American soybeans – these are the things we can easily abandon,” wrote another.

Recent history shows how damaging such actions can be.

When diplomatic pleading failed to alter Seoul’s course, Beijing launched economic war – without so much as a single tariff.

It was a “disaster,” said Jinwoo Yoo, with Grace Travel in Seoul. Tourist numbers fell in half, causing “great losses,” he said.

“It brings me psychological comfort, making me feel like I am doing the right thing – what Chinese people are supposed to do,” she said.

Academics call such conduct “reactionary consumer ethnocentrism,” and Ms. Xia was hardly alone. A study published last year by a researcher from Newcastle University Business School in Britain showed that such “tendencies were found to be above average amongst urban Chinese consumers,” who love imported goods but “appear to react to political or social events.”

Such is the power of Chinese consumers that those reactions can add up to a real cost.

By the fall of 2017, when the Chinese government declared a truce, South Korean researchers tabulated the economic losses at US$7.5-billion. Car makers and tourism providers were hit particularly hard.

But in a cautionary tale for the United States, the losses continue to accrue in South Korea. At Grace Travel, “I still have not seen a significant comeback in numbers of Chinese customers at our agency as of this point,” Mr. Yoo said.

South Korean car makers, too, have not seen their sales return to earlier levels. Their Chinese market share fell, in a single year, from roughly 7.5 per cent to under 5 per cent, and “it will be very difficult for them to restore” past strength, said Yale Zhang, founder of industry research firm Automotive Foresight.

China’s boycott of South Korea came as that country’s companies were already being challenged by the Chinese.

The same is true, however, for U.S. brands – in areas as disparate as smartphones and cars – raising the stakes for any Chinese consumer action.

In SUVs, the strongest segment of the Chinese vehicle market, “seven of the top 10 selling nameplates in China are made by Chinese companies,” said Bill Russo, who previously led Chrysler in China and is now managing director of Gao Feng Advisory Co. in Beijing.

“There’s certainly risk here that Buick and Cadillac and Ford, companies that have made big investments with their brands in localizing product, could experience a consumer backlash,” he said.

The irony is that U.S. car makers have been among the most enthusiastic participants in the localizing activities the White House is now seeking to punish – and U.S. trade action may push them to do more.

If trade barriers impede the flow of U.S.-made parts to China, car makers will have “to make them in China if they want to avoid the barrier,” Mr. Russo said.

“It will force those companies to do the exact opposite of what I think the trade policy is trying to achieve.”

In China, meanwhile, the power of consumers is a source of confidence.

“This trade war between the U.S. and China will last no longer than six months,” predicted Cao Shanshi, a prominent economics writer. “The U.S. tourism industry will still need Chinese visitors to boost their business.” 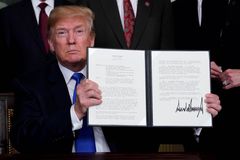 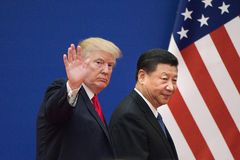 China raises a key market interest rate, following Fed’s move
March 22, 2018
Follow Nathan VanderKlippe on Twitter @nvanderklippe
Report an error Editorial code of conduct
Due to technical reasons, we have temporarily removed commenting from our articles. We hope to have this fixed soon. Thank you for your patience. If you are looking to give feedback on our new site, please send it along to feedback@globeandmail.com. If you want to write a letter to the editor, please forward to letters@globeandmail.com.
Comments are closed