Bonus podcast • Mark MacKinnon speaks from Lebanon on The Decibel

When Paul Naggear and Tracy Awad-Naggear were told their daughter Alexandra had died, becoming one of more than 200 victims of last year’s explosion in the port of Beirut, their first instinct was to give up on Lebanon. To leave this deeply troubled country behind and move to Canada.

They talked about leaving immediately, and settling in Montreal, where Ms. Awad-Naggear spent part of her childhood, and where both still have relatives. But they decided to remain for a few months. It would be just long enough, they hoped, to ensure justice was done for Alexandra, a Canadian citizen like her mother, who was three years old when a hangar full of ammonium nitrate erupted, sending a blast wave through the Lebanese capital that destroyed thousands of homes, including the Naggear family’s apartment.

Ms. Awad-Naggear, who suffered multiple injuries including broken ribs, tried to shield her daughter’s body with her own, but Alexandra died six days later.

“We decided at first to stay for two or three months, and then leave,” Ms. Awad-Naggear told The Globe and Mail in an interview at an apartment in the mountains above Beirut that the couple moved into after losing their home.

“Then we saw all these [non-governmental organizations], all these Lebanese people working, rebuilding, making Lebanon a better place – and all these people who were sending us messages … saying, ‘Wow you guys are doing a great job, you’re giving us hope.’ Young Lebanese people saying: ‘I wanted to leave the country and then I saw what you’re doing, and I decided to stay and fight for this country.’ So once again we decided to stay.”

The couple’s year-long struggle for justice has at times seemed hopeless, as Lebanon’s ruling elite have continued to evade accountability for their roles in the Aug. 4 port disaster. Now the country has been plunged into a devastating economic and political crisis, with only a caretaker government in place while the country’s currency has lost more than 90 per cent of its value, causing hyperinflation and shortages of fuel, medicines and other key goods.

But the decision to stay has yielded some important victories – infusing the Naggears with enough optimism that they continue to fight on.

The most significant breakthrough came last month when Mr. Naggear was elected atop a list of independent candidates that seized control of the leadership board of Beirut’s professional syndicate for engineers and architects, which is normally controlled by the country’s main political parties.

In a sign of how angry Lebanon’s professional middle class is with the country’s ruling elite, Mr. Naggear won more than 70 per cent of the vote. Despite the pandemic, turnout was triple the previous syndicate election.

“I didn’t think it would be such a big thing, but I just think it gave people hope to see that Tracy and I are still here, and we are fighting where we can,” Mr. Naggear said, as the couple’s dog Sia played at his feet on the balcony of their apartment in Beit Mery. The 37-year-old’s face is still scarred from cuts received during the explosion, and he makes it clear that his entry into politics is deeply personal. “When we saw the results we were both very happy – that we could fight them and we could win.”

When the Naggears and others in Lebanon’s young professional class speak of “them,” they mean the country’s sectarian leaders, a group of warlords-turned-politicians who destroyed the country during a civil war from 1975 to 1990.

Many young Lebanese accuse those leaders of ruining the country a second time by creating a postwar state built on nepotism and kleptocracy.

In 2019, hundreds of thousands of Lebanese – including little Alexandra, who attended the protests perched on her father’s shoulders – took to the streets for months on end, demanding that the entire ruling class resign. Instead, the warlords have clung to power even through the port disaster and now the financial collapse.

With the country scheduled to hold parliamentary elections next year, Mr. Naggear’s victory has ignited fresh hope among the revolutionaries of 2019 – a postsectarian mix of Sunnis, Shias, Christians, and Druze – that perhaps change can be brought via the ballot box.

While the syndicates can’t pass laws, Mr. Naggear said winning control of the body – which needs to sign off on any new building project in Beirut – means that he and the other independents would be able to end a culture of side payments, and to enforce environmental and other standards. “It’s a big roadblock to corruption in infrastructure,” he said.

“The elections are one battle in a very, very long mission to take back the country,” said Sarah el-Yafi, a 36-year-old political activist and the granddaughter of Abdallah el-Yafi, a pre-civil war prime minister who is credited with giving Lebanese women the right to vote. “We have this inherent belief that we are here to disrupt the status quo – and that it can be done.”

But the stonewalling of the official investigation into the Aug. 4 disaster highlights why Lebanon won’t be easy to change. The first judge assigned to the case, Fadi Sawan, was removed after he sought to charge Prime Minister Hassan Diab and three top cabinet ministers with negligence after it was revealed that Mr. Diab’s government had been warned about the dangerous store of ammonium nitrate in the port.

The official logic behind Justice Sawan’s dismissal was that he had a bias because his home, like hundreds of thousands of others in Beirut, had sustained damage in the explosion.

The second judge appointed to the case, Tariq Bitar, has already encountered the same barriers, with the Interior Ministry refusing his request to interrogate Abbas Ibrahim, the country’s powerful head of General Security.

Hinting at who really lay behind that decision, billboards supporting Mr. Ibrahim suddenly appeared in parts of the country controlled by the Hezbollah militia, which also backs Mr. Diab and President Michel Aoun. Justice Bitar has vowed to press on with his investigation.

“We don’t have a government. What we have is a group of gangs. Like prayer beads, if one of them falls they all will,” said Ibrahim Hoteit, whose firefighter brother Tharwat was among the first to die in the port explosion.

Mr. Hoteit was one of the leaders of a small protest outside the Justice Ministry last week that was joined by the Naggears. “Strike, strike, oh Bitar! Lebanon is proud of you!” Mr. Hoteit shouted into a megaphone as a few dozen other survivors joined the chant. “Down with the politicians! Down with immunity!”

Winning anything like a majority in parliament – which has seat quotas for each of the country’s 11 religious groups, reinforcing the power of the sectarian warlords – will also be far harder than winning a syndicate election. Currently all but a handful of the 128 MPs owe allegiance to a sectarian leader.

While many Lebanese have urged one or both of them to take the next step and run for parliament, Mr. Naggear and Ms. Awad-Naggear say they’re not interested in getting involved in higher-level politics – at least not while they’re focused on the fight to make sure someone is held accountable for the port blast, and the death of their daughter, whom they knew as “Lexou.”

Becoming an MP “would take a lot of time and we would not be fully focused on [getting] justice,” said the 35-year-old Ms. Awad-Naggear. “We’re not the right people for this. For now.”

Nearly a year after the explosion that forever changed their lives, their Beirut apartment is finally repaired and waiting for them to move back into. But emotionally, they’re not quite ready.

“We’ve been going down [to Beirut] from time to time, just to get used to being back home. We didn’t sleep there yet, but we plan to move back, maybe at the end of the summer,” said Ms. Awad-Naggear. “For one part, it’s difficult because it’s the home of Lexou, and being there without her and remembering what happened on that day is pretty difficult. On the other side, being home is actually comforting because we have so many souvenirs of Lexou there – because it’s her home and we feel her presence more there than anywhere else.”

For now, they remain at the apartment in Beit Mery, living through the financial crisis along with the rest of Lebanon. Like most homes, their building receives only a few hours of electricity each day from the state grid, forcing them to rely on a fuel-powered generator even as gasoline prices skyrocket. Water is now delivered to the town’s 13,000 residents by truck, since the lack of electricity means only a trickle now pumps up the mountain from Beirut.

All of it is a reminder to the Naggears that the system they blame for the death of their daughter is still in place.

“For us, justice is to be able to live in this country again,” Mr. Naggear said. “Suppose we get justice, and a few people are put behind bars and the system stays similar, we will not feel safe. Today, we are not safe when we are in Beirut, and we will not feel safe having children in the country. And we want to, we want to stay here. This is our right, this is our land.”

The Decibel: A view from Lebanon 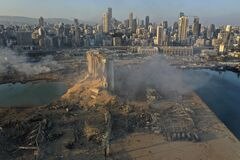 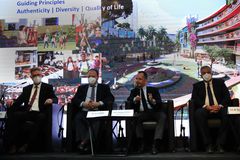