Belarussian opposition leader Svetlana Tikhanovskaya has called on neighbouring Russia to respect her country’s sovereignty, amid rising concern the Kremlin will help the regime of President Alexander Lukashenko quell pro-democracy protests that have entered their fourth week.

Ms. Tikhanovskaya also said in an interview with The Globe and Mail that she had asked Canada to help mediate the crisis in Belarus. Massive crowds of opposition supporters have faced off with riot police on a near-daily basis and the demonstrations have recently taken on a menacing air. On Sunday, state media showed footage of Mr. Lukashenko carrying an assault rifle for the second time in as many weeks.

Moscow has already intervened on the side of the regime, sending staff from its RT television network to fill in at Belarussian state television after staff there went on strike in solidarity with the protesters. There are worries the Kremlin will go much further. President Vladimir Putin said last week that Russia, at Mr. Lukashenko’s request, had formed a unit of “law enforcement officers” that were ready to intervene in Belarus “if necessary.”

In Belarus, a newcomer fights a presidential election stacked against her as ‘Europe’s last dictator’ faces a reckoning

Mr. Lukashenko plans to fly to Moscow before his expected inauguration, due to take place before Oct. 9.

“It would be a great mistake if Russia were to interfere in the internal affairs of our country,” said Ms. Tikhanovskaya, a 37-year-old political novice who only ran for president after her husband, Sergey Tikhanovsky, was jailed in June over his criticism of Mr. Lukashenko.

“They have to understand that what’s going on in Belarus is only about one person – the desire of the Belarussian people not to deal with this President – it’s not about geopolitics or external threats,” she said via Skype.

Hundreds of thousands of Belarussians have taken to the streets since an Aug. 9 presidential election that they believe was won by Ms. Tikhanovskaya. However, Mr. Lukashenko, who has been in office since 1994, has refused to leave power. Official results, widely believed to have been doctored, show the incumbent won 80 per cent of the vote, versus 10 per cent for Ms. Tikhanovskaya.

On Tuesday, there were dozens of arrests in the capital, as university students marched through Minsk chanting for Mr. Lukashenko to “Leave!” on what was supposed to be the first day of the fall semester. More than 7,000 people have been arrested since the demonstrations began.

Ms. Tikhanovskaya said the Kremlin should realize that the protests were not anti-Russian in nature. She said her country, which has Russian military bases on its soil, was not looking to end its relationship with Moscow and that a post-Lukashenko government would seek friendly relations with all its neighbours. “We don’t have to choose between Russia or Europe.”

The message that Belarus only wants democracy – and not to be dragged into a geopolitical tug-of-war, like the one in which Russia sent troops into Ukraine after a revolution in Kyiv six years ago – is one Ms. Tikhanovskaya will repeat in a speech to the United Nations Security Council on Friday.

Ms. Tikhanovskaya said she will also ask the world not to lose interest in Belarus as the crisis drags on. “Our wish to live in a democratic country – it deserves the attention of the world. So, if you can keep the focus on us, just please [do].”

Ms. Tikhanovskaya spoke to The Globe from Vilnius, the capital of Lithuania, where she has been living in exile since Aug. 11. She said she was “still not ready” to say why she left Belarus after the election, but made it clear that it involved the safety of her children.

“If I had the opportunity to be there, I would stand alongside all the people,” she said. “While I don’t feel my children are safe there, I can’t go back. As soon as I feel that I can, we are moving home.”

Until she was thrust into politics, Ms. Tikhanovskaya spent most of her time raising her 10-year-old son and her five-year-old daughter, who was born almost deaf. She had worked as a teacher and English translator before deciding to focus on caring for her children.

Her husband remains in prison. “He is as okay as a person can be in jail. He’s physically okay and morally okay, and visited by the lawyers a couple of times a week,” she said. “He knows what is going on in Belarus – maybe not everything – and he really appreciates what is going on. He’s glad Belarussians woke up.”

Ms. Tikhanovskaya said she had spoken twice with Foreign Minister François-Philippe Champagne since arriving in Lithuania, including a phone call on Tuesday. “He assured me they really want to help.”

Lithuania, along with Latvia and Estonia, recently imposed economic sanctions and a travel ban against Mr. Lukashenko and 29 other members of his regime.

Reuters reported on Tuesday that the United States was also considering sanctions against a shorter list of seven unnamed regime members suspected of involvement in election fraud and violence against the protesters. The European Union is also reportedly working on a list of officials it could target with potential sanctions.

Ms. Tikhanovskaya said it was not her role to ask foreign governments to adopt sanctions.

“We have no right to ask any country to do this,” she said. But she added, “If Canada considers that you can do something else and it would be appropriate in this situation to show your support … of course we would appreciate any kind of help.”

Adam Austen, a spokesman for Mr. Champagne, said the minister had been in contact with both Ms. Tikhanovskaya and Belarussian Foreign Minister Vladimir Makei. “We do not accept the results of the presidential election and deplore the subsequent violence against peaceful protesters and crackdown on press freedom,” Mr. Austen said in an e-mail. He added that Canada “is actively considering options to support the people of Belarus and ensure that human rights are upheld.”

In an ideal scenario, Ms. Tikhanovskaya hopes Mr. Lukashenko would step aside after realizing the protests against him will not end. If that happens, she says she stands ready to serve as interim president and oversee new elections.

But she said she wouldn’t run again. “I have like a mission now. I’m not going to be involved in these fair elections, but I have promised to organize them.”

Small cracks appeared in the Belarussian opposition on Tuesday, which had thus far remained united throughout the election campaign and subsequent protests. On Tuesday, Maria Kolesnikova, one of three women who often appeared together as “The Trio” during the election campaign, announced she and the team of jailed presidential candidate Viktor Babariko were launching a new party called Together.

Ms. Tikhanovskaya said that now, while the regime was still in place, was not the time to launch new political movements.

She was optimistic Belarus was on the cusp of change because “our people will not give up.” But she said she was worried by Mr. Lukashenko’s rifle-toting appearances on state television.

“It’s rather difficult to analyze his actions now. We don’t know if he wants to show that he’s ready to shoot into his people – or maybe he’s afraid of people so much that he has to keep this gun for self-protection,” she said.

“They are behaving as if it’s a couple of people who are not agreeing with the regime. But we are the majority and we have to be listened to.” 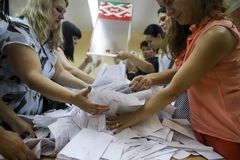