Israeli Prime Minister Benjamin Netanyahu’s bid to win another term in office has relied heavily on his close relationship with U.S. President Donald Trump. Campaign posters show the two leaders smiling and shaking hands, reminding Israelis of the gains that bond has delivered to their country, including Mr. Trump’s decisions to move the U.S. embassy to Jerusalem and to recognize Israel’s annexation of the Golan Heights.

Mr. Trump’s recognition of Israel’s claim to the Golan came with just two weeks remaining in Israel’s closely fought election race – leading to complaints that Mr. Trump was unfairly aiding the incumbent. On Saturday, just three days before the vote, Mr. Netanyahu raised the prospect of an even more controversial move ahead, promising to annex Jewish settlement blocs in the occupied West Bank if he is returned to the prime minister’s office.

Mr. Netanyahu has governed Israel since 2009 as the head of a series of coalition governments. With polls showing his Likud party in a neck-and-neck race with the centrist Blue and White movement – with neither in reach of a majority – his remarks were likely aimed at shoring up his nationalist credentials in the eyes of potential coalition partners.

“You are asking whether we are moving on to the next stage – the answer is yes, we will move to the next stage,” Mr. Netanyahu said in response to a television interviewer’s question on the fate of the West Bank settlements. “I will extend sovereignty and I don’t distinguish between the settlement blocs and the isolated ones, because each settlement is Israeli, and I will not hand it over to Palestinian sovereignty.”

Election time or not, the statement was remarkable coming from a sitting Israeli prime minister.

Should Mr. Netanyahu win and follow through on the plan, it would represent another grave challenge to the already battered concept of international law. The settlements Mr. Netanyahu wants to annex were built, in contravention of the Geneva Conventions, on land that Israel seized after a 1967 war.

Absorbing the West Bank settlements might also make an Israeli-Palestinian peace deal unreachable, as it would unilaterally slice up the territory on which the Palestinian Authority hopes to eventually declare a state. Dating back to the 1990s, most serious efforts to forge a lasting peace between Israel and the Palestinians envisioned the bulk of the West Bank settlements being evacuated in return for guarantees about Israel’s security.

But peace efforts have been dormant for some time, and Mr. Trump, who received multiple standing ovations from the Republican Jewish Coalition on Saturday in Las Vegas for his actions toward Israel, has yet to reveal his own plan for resolving the Israeli-Palestinian conflict. Mr. Trump has not only taken Israel’s side over Jerusalem and Golan, he has also cut off U.S. aid to both the Palestinian Authority and the United Nations agency that supports the five million Palestinian refugees scattered around the Middle East.

Mr. Netanyahu may feel confident of Mr. Trump’s support as he pushes forward, but his proposed move would put Israel’s other friends in the West in an awkward bind: Would they continue to support Israel, even as it moves to demolish the remaining hopes for a peace process based on the two-state solution?

Could Canada, for instance, maintain normal relations with Israel if it begins annexing chunks of the West Bank, while still leading calls for Russia to be punished with economic sanctions for its annexation of Crimea?

A pair of opinion polls released Friday showed the centrist Blue and White political alliance, led by former Israeli army chief Benny Gantz, on track to win the largest number of seats in the Knesset while falling far short of being able to form a majority government. A third poll showed Blue and White and Mr. Netanyahu’s right-wing Likud party heading toward a dead heat.

Mr. Gantz on Sunday dismissed Mr. Netanyahu’s annexation proposal as an “irresponsible” bid to win votes. Mr. Gantz said his own preference was to see an internationally backed peace process, rather than unilateral moves.

All three opinion polls predicted that right-wing parties would combine to win more Knesset seats than centrist and left-wing parties, making it far easier for Mr. Netanyahu to form the next government.

Mr. Netanyahu’s nationalist credentials are such that many voters seem willing to overlook a recommendation from Israel’s attorney-general that Mr. Netanyahu be indicted on charges of bribery and breach of trust that stem from three separate corruption probes.

More than 400,000 Israelis live in several dozen settlement blocs scattered around the West Bank, which is also home to 2.9 million Palestinians. B’Tselem, an Israeli human-rights group, estimates that Israeli settlements cover about 10 per cent of the territory of the West Bank.

Hanan Ashrawi, a veteran Palestinian negotiator, said Mr. Netanyahu’s plan to annex the West Bank settlements would mark “the end of any chances of peace.” Hamas, the militant Islamist group that controls the Gaza Strip, and which also has supporters in the West Bank, said any Israeli move would be met with “popular resistance, armed resistance and by all our might.”

Mr. Netanyahu, however, clearly believes that Israel and the world are in a new era. “Everyone says you can’t hold an occupied territory, but this proves you can,” he said after Mr. Trump’s recognition of Israel’s annexation of the Golan Heights. “If occupied in a defensive war, then it’s ours.” 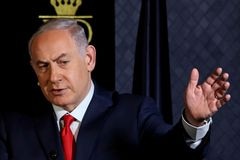 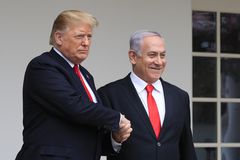 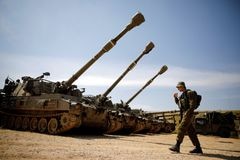