Bolivia’s attorney general said on Friday that his office has opened a probe into former President Evo Morales for alleged sedition and terrorism, related to accusations from the interim government that he has been stirring unrest since resigning.

The interior minister earlier filed a criminal complaint against the former socialist leader, based on evidence Morales described as fake.

Interim President Jeanine Anez, a former senator and opponent of Morales, has faced a wave of demonstrations by his supporters since taking office in a power vacuum last week.

Morales and his vice president stepped down under pressure from security forces and anti-government protesters on Nov. 10, amid reports of irregularities in an Oct. 20 election.

Morales fled to Mexico, which has granted him asylum, and says he was toppled in a coup. At least 29 have been killed in clashes with security forces since he resigned.

Attorney General Juan Lanchipa said the foreign ministry would ask Mexico to allow Morales to provide his statement as a suspect in the investigation, which is based on a video Interior Minister Arturo Murillo distributed to media this week. In the video, a Bolivian man is shown talking to someone on a speakerphone who appears to be directing plans for road blockades.

Murillo said the voice on the speakerphone was that of Morales. Reuters could not verify the authenticity of the video.

Murillo told journalists outside the prosecutors’ office in La Paz on Friday: “The evidence is clear. We’ve presented it.”

Morales could not immediately be reached for comment. He said on Twitter that authorities should be investigating the deaths of protesters instead of going after him on the basis of what he called made-up evidence.

Blocking roads is a common form of protest in Bolivia and much of South America. Intense blockades by Morales supporters have cut off fuel and food to some cities.

Authorities have transported some 1,400 tonnes of food by plane in less than a week due to blockades, the government said on Friday.

The criminal probe into Morales did not appear to slow efforts by lawmakers in his Movement to Socialism (MAS) party from working with their opponents in Congress to pass legislation to pave the way for new elections.

MAS congressman Henry Cabrera, the vice president of the house of deputies, said parliament planned to pass a bill by Saturday afternoon, after a deal was reached among all parties on Friday.

“We’re definitely going to approve it,” Cabrera told Reuters. “We’re not going to obstruct anything.”

But on the streets Morales’ supporters have continued to push for Anez to resign.

On Friday, she made a public plea for demonstrators to end an ongoing blockade at a natural gas plant that supplies La Paz.

Eight people died in clashes after the military forcibly cleared access to the plant briefly on Tuesday. Protesters carrying the coffins with some of the dead were dispersed with tear gas on Thursday as they neared the presidential palace.

“I ask for reflection from brothers who are carrying out this unnecessary blockade,” Anez said on Friday. “We’re all Bolivians.”

Anez reiterated she will only stay in power long enough for new elections. But her critics say her cabinet has overstepped the bounds of a caretaker government by making changes to foreign policy, opening Morales’ former living quarters for journalists to tour, and threatening to punish his allies.

In the past week, authorities have alleged that several of Morales’ allies have taken part in criminal activity, including the former culture minister, his former presidency minister, the former vice president’s brother, and the vice president of MAS.

A lawyer affiliated with opponents of Morales, Jorge Valda, said he planned to also ask authorities to issue an arrest warrant for Morales’ daughter, Evaliz Morales, for alleged sedition and corruption. She could not be reached for comment. 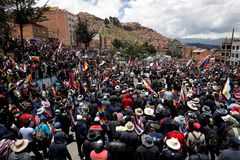 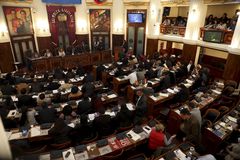 In Bolivia, democracy has been thrown to the lions
November 20, 2019 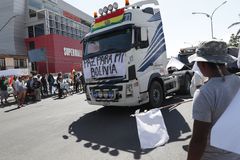