Britain and the United States are locked in a growing diplomatic spat that has forced out the British ambassador to Washington and prompted sharp criticism of the man poised to become the country’s next Prime Minister.

The row has been described as the worst dispute between the transatlantic allies in more than 100 years and it highlights the complexities countries face in dealing with the volatile temper of U.S. President Donald Trump. It has also raised difficult questions for Britain as it looks to sign trade deals with the U.S. and other nations after Brexit.

The saga escalated on Wednesday when Britain’s ambassador to the U.S., Sir Kim Darroch, resigned a day after being denounced by Mr. Trump as “wacky,” “very stupid” and a “pompous fool.” The insults had been in response to the publication last Sunday of a collection of confidential e-mails Sir Kim had sent to government officials in London in which he described the Trump White House as “clumsy and inept.” Mr. Trump not only lashed out at Sir Kim, he also said that the White House would no longer deal with the diplomat, effectively cutting off his Washington contacts. “The current situation is making it impossible for me to carry out my role as I would like,” Sir Kim said in his resignation letter.

His resignation has set off a flurry of finger pointing and accusations in London. Prime Minister Theresa May quickly ordered a police investigation into the leak but also stood by Sir Kim, insisting that he had simply offered the kind of frank assessment that is expected from diplomats. She also said that Britain would not bow to pressure from Mr. Trump and fire the ambassador. “Good government depends on public servants being able to give full and frank advice,” she told the House of Commons on Wednesday and added that she deeply regretted his decision to step down.

Sir Simon McDonald, the top civil servant in the British Foreign Office, called the leak “the worst breach of trust in our service in my career” and added that Britain hadn’t faced this kind of problem with an ambassador to the U.S. since 1856, “when the incumbent was accused of recruiting Americans to fight on the British side in the Crimean War.”

There were also indications that Sir Kim decided to resign after he failed to win the backing of former foreign secretary Boris Johnson, who is leading the race to replace Ms. May as leader of the Conservative Party and Prime Minister. Conservative Party members are about to vote for the next leader who will take over from Ms. May on July 24. In a television debate on Tuesday with his only opponent, current Foreign Secretary Jeremy Hunt, Mr. Johnson refused to say if he would retain Sir Kim in his post.

Mr. Johnson has a close relationship with Mr. Trump and the U.S. President has spoken highly of him. “I alone will decide who takes important and politically sensitive jobs,” Mr. Johnson said during the debate. On Wednesday, he expressed regret at Sir Kim’s resignation and added that he hoped whoever leaked the e-mails “is run down, caught and eviscerated.”

Mr. Hunt tried to differentiate himself from Mr. Johnson and offered his full support for Sir Kim.“I think it is absolutely essential that when our diplomats do their jobs all over the world … we defend them,” he told reporters during the Global Conference on Media Freedom, which is taking place in London. Sir Kim was “just doing what he should have been doing giving a frank assessment, a personal assessment, of the political situation in the country where he was posted. That’s why I defended him and I think we all should,” he added.

Others were less restrained. Tory MP Alan Duncan, who is Minister of State for Europe and the Americas and backs Mr. Hunt’s leadership bid, called Mr. Johnson’s response “contemptible.” “Boris Johnson has basically thrown our ambassador under a bus,” Mr. Duncan said Wednesday. But others came to Mr. Johnson’s defence and said the criticism was unfair. “The person responsible is the person who leaked this,” said Michael Fallon, a Tory MP who backs Mr. Johnson.

The motive for the leak has also become hotly debated, with suggestions that hard-line supporters of Brexit were eager to see Sir Kim leave Washington because of his previous post as Britain’s ambassador to the European Union, where he was perceived as a proponent of Britain remaining in the EU. The leaked e-mails were obtained by Isabel Oakeshott, a Brexit sympathizer who has ties to Nigel Farage, the leader of the Brexit Party. Ms. Oakeshott has dismissed theories that she was given the material to force out Sir Kim. “This is ludicrous,” she said on Twitter. “Like I’ve said, sometimes a great story is just that; not some kind of global conspiracy.”

Mr. Trump has yet to comment on Sir Kim’s resignation. But a spokesperson for the State Department said that "the United States and the United Kingdom share a bond that is bigger than any individual, and we look forward to continuing that partnership.” 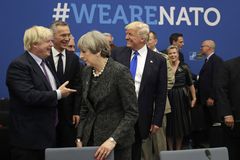 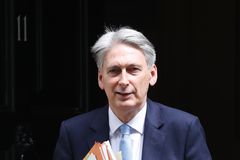 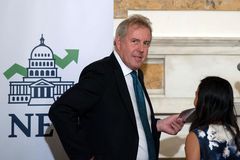