The expected decision comes amid growing friction between Britain and China over Hong Kong as well as new security concerns about Huawei raised by Britain’s National Cyber Security Centre, or NCSC, a government organization that advises on computer threats.

Any change of heart by Mr. Johnson could have repercussions for the Canadian government, which has yet to decide whether to ban gear from the Chinese technology giant, and the larger Five Eyes intelligence alliance. Canada would be the lone member of the group – which also includes the United States, Britain, Australia and New Zealand – that is not taking a firm stance against Huawei.

Britain’s decision in January to allow Huawei components in non-core parts of the fifth-generation network had been seen as a potential model for Canada and other countries to follow. It also flew in the face of objections from U.S. President Donald Trump and other U.S. officials who view Huawei as a security threat because of its ties to the Chinese government.

Several British media outlets reported over the weekend that Mr. Johnson is now ready to do a U-turn and ban Huawei technology. He is also expected to order the removal of the company’s components from the existing 5G, 4G and 3G networks within the next seven years.

Mr. Johnson has grown increasingly wary about Huawei, especially as China sharpened its crackdown on dissent in Hong Kong. Last week Mr. Johnson criticized China’s recently imposed security law on the territory and announced that Britain would pave the way for up to 2.5 million Hong Kong residents to immigrate to Britain.

“I don’t want to see our critical national infrastructure at risk of being in any way controlled by potentially hostile state vendors,” he told the Evening Standard newspaper. “We have to think very carefully about how to proceed now.”

The Prime Minister has also faced mounting pressure from more than 60 fellow Conservative members of Parliament who have raised concerns about China’s conduct in Hong Kong and who have vigorously opposed the government’s decision to allow Huawei to supply parts of the 5G network.

Another key factor in Mr. Johnson’s about-face appears to be a fresh assessment of the company by the NCSC. Last year, the centre concluded that any security risks associated with Huawei technology could be managed.

The NCSC noted at the time that it had been examining Huawei’s equipment in a special evaluation centre for the past decade, and it said while there had been problems with the company’s engineering and security capabilities, the issues could be handled.

The NCSC has been re-examining its position since May when the U.S. government slapped new sanctions on Huawei that will limit the company’s ability to source American-made semiconductors. The Sunday Telegraph and The Sunday Times reported over the weekend that the NCSC has concluded that the sanctions will force Huawei to use alternative components which could make it impossible to manage the risks.

The centre’s report will be sent to cabinet ministers this week and Mr. Johnson is expected to announce the ban on Huawei components this month.

Officials at Downing Street refused to comment on Sunday, but Health Secretary Matt Hancock said the government’s earlier decision included conditions that had to be met by Huawei. “I’m sure that the National Security Council will look at those conditions and make the right decision on this to make sure that we have both a very strong telecoms infrastructure and everyone can get a phone signal,” Mr. Hancock told Sky TV. The council is chaired by Mr. Johnson and includes key ministers.

That review has been taking place for close to two years.

“We are taking all security factors into account, including those from our allies and our security agencies,” he said. “We will ensure that our networks are kept secure and will take the appropriate decisions in due course.”

“When it comes to Huawei, the Trudeau Liberals have spent months ignoring Canada’s security agencies and have refused to take a position on Huawei and its possible participation in Canada’s 5G network. This has put Canada offside with our G7 allies and threatens the future of Five Eyes intelligence sharing,” he said.

“Conservatives have been clear about calling on Justin Trudeau and his Liberal government to take immediate action to protect our national security and Canadians’ privacy and ban Huawei from Canada’s 5G network.”

In Britain, several security experts have argued that allowing Huawei to supply non-core components to the 5G network, such as antennas and base stations, was a practical solution given that the country has few alternatives. The only real options would be Sweden’s Ericsson and Nokia of Finland. Experts say components from both those companies would be more expensive and switching would delay the rollout of 5G for consumers.

Banning Huawei could also be financially crippling for British telecom providers. BT runs about two-thirds of its existing 4G network, one of the largest in the country, on equipment supplied by Huawei.

Huawei officials have consistently rejected security concerns raised by U.S. officials, arguing they have no proof and are only trying to promote American suppliers.

“The reason Huawei is the global leader in 5G and mobile phones is because it invests billions in R&D,” Paul Harrison, the company’s head of international media, said on Twitter on Sunday. “The U.S. fell asleep at the 5G wheel years ago and they’re fighting to claw back market position. ... UK policy is being dictated by Trump administration.”

Huawei’s vice-president Victor Zhang said in a statement Sunday that the company was working with customers to manage the U.S. sanctions “so the UK can maintain its current lead in 5G.” He added that “as ever, we remain open to discussions with the government. We believe it is too early to determine the impact of the proposed restrictions, which are not about security, but about market position.”

With a report from Janice Dickson in Ottawa 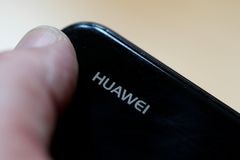 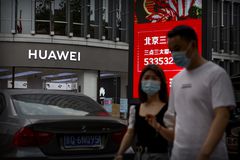