British Prime Minister Boris Johnson has called the devolution of powers to Scotland “a disaster”, a comment that played into the hands of Scottish nationalists as recent polls show a majority of Scots now support independence.

The bonds holding the United Kingdom together have been severely strained over the last five years by Brexit, the government’s handling of the COVID-19 pandemic, and repeated calls by the Scottish National Party (SNP) for a new referendum on independence.

In a video call on Friday with northern English lawmakers from his Conservative Party, Johnson said that devolution, which was introduced by Tony Blair, had been the former Labout prime minister’s “biggest mistake” and “a disaster”, media reported.

He also said he saw no case for giving Scotland’s semi-autonomous government and parliament, which are dominated by the SNP, any further powers in addition to the ones they hold now.

Asked about the comments on Tuesday, Johnson’s spokesman did not deny them but said: "The PM has always fully supported devolution and this government continues to put the union in the heart of everything that we do.

“He will always stand against those trying to separate the United Kingdom. He is very clear that he rejects the SNP’s call to break up the U.K..”

But Scotland’s First Minister Nicola Sturgeon, the SNP leader, said Johnson’s comments to the lawmakers showed the Conservatives' public statements of support for devolution were duplicitous.

“Worth bookmarking these PM comments for the next time Tories (Conservatives) say they’re not a threat to the powers of the Scottish Parliament – or, even more incredibly, that they support devolving more powers,” she said on Twitter.

Independence is the only way to protect and strengthen the Scottish parliament, she added.

In a sign of the nervousness that Johnson’s comments caused among Scots who support staying part of the United Kingdom, the Conservative leader in Scotland, Douglas Ross, immediately contradicted the prime minister.

“Devolution has not been a disaster,” he said on Twitter. “The SNP’s non-stop obsession with another referendum – above jobs, schools and everything else – has been a disaster.”

Scottish voters rejected independence by 55 to 45 per cent in a 2014 referendum, but since then the SNP have become stronger, winning all elections in Scotland by huge margins. They are expected to perform strongly in elections to the Scottish parliament in May. Sturgeon is pushing for a second referendum.

In the 2016 Brexit referendum, England and Wales voted to leave the European Union but Scotland and Northern Ireland voted to remain. Due to the much greater size of England’s population, the overall result was a win for Brexit.

This was galling for many Scots as one of the central arguments put forward in favour of remaining in the United Kingdom in their own 2014 referendum was that it was the only way for Scotland to remain part of the European bloc.

In an attempt to defuse the row caused by Johnson’s comments, housing minister Robert Jenrick said it was not realistic to demand a second referendum.

“Any politician who wanted to hold a referendum on a topic like this, at this moment in time, is frankly mad,” he said, accusing the SNP of prioritizing their cause above the fight against COVID-19 and the economic damage it has caused.

However, polls suggest that Scots have a more favourable view of how Sturgeon and her administration have handled the pandemic than the rest of the country has of how Johnson’s government has performed.

SNP lawmaker Drew Henry said Johnson’s comments showed his and his party’s “contempt” for the people of Scotland.

“Effectively what they are saying is it’s all right for Scotland to have devolution as long as they vote for the Westminster party we want them to,” he told the BBC. 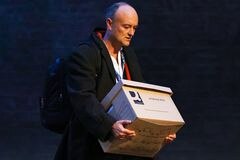