British Prime Minister Boris Johnson has formally kicked off an election campaign that he hopes will finally resolve Brexit, but his Conservative party is off to a rough start, with a series of missteps and a sudden cabinet resignation.

Mr. Johnson launched the campaign Wednesday after asking the Queen to dissolve Parliament and clear the way for a vote on Dec. 12. It will be the country’s third election in four years and the second to tackle the thorny issue of how to pull Britain out of the European Union.

The Prime Minister has been itching for a snap election for months, hoping voters will deliver the Conservatives a majority so he can push through a Brexit deal he has struck with the EU. Most opinion polls have put the Tories well ahead of their main rivals, the Labour Party, although the gap has narrowed.

In a newspaper article, Mr. Johnson took a swipe at Labour Leader Jeremy Corbyn, writing that he would go after the wealthy with “a relish and a vindictiveness not seen since Stalin.”

Mr. Johnson justified the election call Wednesday by saying Parliament had become paralyzed and unable to break a deadlock over Brexit. “I can tell you I’ve got to the stage where I’ve been wanting to chew my own tie in frustration because in a sense we’re so nearly there,” he said in a speech outside No. 10 Downing Street. “We’ve got a deal, oven ready, by which we can leave the EU in just a few weeks.”

But even as he spoke, Conservative Party officials were scrambling to contain the fallout from the abrupt resignation of Alun Cairns, the Secretary of State for Wales. Mr. Cairns quit Wednesday amid a growing scandal over his ties to former aide Ross England, who sabotaged a sexual-assault trial involving a friend by defying the judge’s instructions and making claims about the victim’s sexual history. The trial had to be stopped, and the presiding judge rebuked Mr. England. Mr. Cairns had repeatedly denied knowing anything about Mr. England’s actions and later backed his bid for a Conservative nomination in the upcoming Welsh election. He resigned after the BBC revealed e-mails showing he’d been told about Mr. England’s actions. Mr. Cairns said he will run for re-election as an MP in Wales despite growing calls for him to withdraw as a candidate.

His resignation came hours after another cabinet minister, Jacob Rees-Mogg, had to apologize for comments he made about the Grenfell Tower fire, which killed 72 people in 2017. In a radio interview Tuesday, Mr. Rees-Mogg suggested that people in the building should have used common sense and ignored instructions from firefighters to remain in their apartments. That “stay put” order has been at the heart of a lengthy public inquiry into the fire, and the London Fire Brigade has come under criticism for waiting too long to lift the order and evacuate the building.

Mr. Rees-Mogg “suggesting that the 72 people who lost their lives at Grenfell lacked common sense is beyond disrespectful. It is extremely painful and insulting to bereaved families,” said Grenfell United, a community group that represents survivors and the families of victims. On Wednesday, Mr. Rees-Mogg “profoundly apologized” and said he had misspoken. Another Tory MP, Andrew Bridgen, also apologized for initially defending Mr. Rees-Mogg’s remarks and suggesting that he was smarter than the people who died in the fire.

The Grenfell comments were particularly damaging to the Conservatives because the fire has come to symbolize the deep inequality in Britain. The social-housing complex was located in one of the country’s wealthiest boroughs, Kensington and Chelsea, and was home to a large number of refugees from Afghanistan, Iraq and North Africa. Former residents said their concerns about fire safety had been ignored for years by the Conservative-controlled borough council, which has also been accused of cutting costs on renovations that led to the installation of highly flammable cladding.

The scandals were gifts to Mr. Corbyn, who has been eager to steer the election away from Brexit and on to domestic issues such as health care and education. The Labour Party launched its campaign last week with plans to boost the minimum wage, introduce a four-day work week, nationalize several sectors of the economy and retrofit every home in the country to make them more energy-efficient. “Labour will deliver the real change Britain needs, so that no one is held back and no community left behind,” Mr. Corbyn told a party rally this week.

Experts say the election is far too close to call and that the strength of other parties – including the resurgent Liberal Democrats and the Brexit Party – could leave the country with another hung Parliament just weeks before the new, Jan. 31 deadline for Britain to leave the EU. 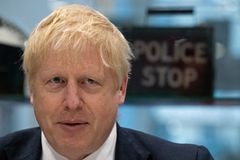 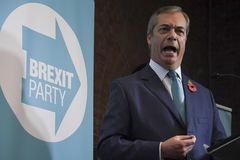 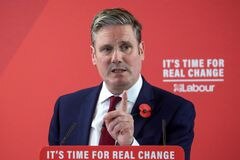