Boris Johnson had only just won the race to become Britain’s Prime Minister when his father, Stanley, began offering advice.

The elder Mr. Johnson gathered with journalists almost immediately after his son won the Conservative Party leadership race on Tuesday, eager to offer his thoughts and suggestions on a wide variety of topics.

Boris should immediately head to Brazil, he said at one point. “He needs to sit down with president [Jair] Bolsonaro and say, look, come on, the whole world’s future is being affected by what’s happening to the Amazon rain forest,” Mr. Johnson said, referring to the loosening of controls on developers that has contributed to deforestation.

On how to handle the European Union he offered: “Basically what we have to do is to make it absolutely clear to our European partners that we mean business. And if they don’t come to terms with us, we will be leaving [the EU], it’s as simple as that.”

The Arctic, too, has to be a priority for the new PM, he added: “Don’t think the Arctic is not a major, major issue just for Canada, it is for the whole of the world.”

Mr. Johnson, 78, is far from a typical proud parent whose son has just assumed the country’s highest office. He’s a former banker, politician, poet, novelist, environmentalist and reality TV contestant. He spent several years at the World Bank in the 1960s and 1970s before joining the European Commission in Brussels to work on environmental issues. He turned to politics in 1979 and won a seat in the European Parliament, which he held until 1984, and then ran unsuccessfully for a seat at Westminster for the Conservatives in 2005.

In recent years he’s become a prominent environmentalist and an occasional TV star, appearing on programs like I’m a Celebrity … Get Me Out of Here!

‘No ifs or buts’: Boris Johnson vows Britain will pull out of EU on Oct. 31 in first address as PM

Opinion: In an uncertain world, Boris Johnson’s arrival only poses new challenges for Canada’s next government

In person, he’s a carbon copy of his son with a mop of dishevelled hair and a jovial personality that was on full display Tuesday afternoon as he stood for more than an hour talking to anyone who came near. “Of course I’m happy,” he said in mock anger at one questioner. “I think we’re going to have to go … have a few drinks.”

He has produced not one but three politicians – Boris, his brother Jo Johnson and sister Rachel Johnson – making the family so close to a dynasty that Rachel once quipped “like rats in London you’re never more than a few feet from at least two Johnsons.”

The family has not been united when it comes to Brexit. Jo Johnson, a fellow Tory MP, resigned as a junior minister last year to back a second referendum on Brexit while Ms. Johnson, a journalist, recently ran unsuccessfully for a seat in the European Parliament for the Change UK party which supports revoking Brexit altogether. Stanley campaigned to remain in the EU during the 2016 Brexit referendum, even though Boris co-headed the Vote Leave side. And the elder Johnson even penned a novel about the Brexit referendum called Kompromat, a political thriller about Russian interference in the campaign.

On Tuesday Mr. Johnson eagerly backed his son’s Brexit strategy, including his pledge to pull the country out of the EU on Oct. 31, “no matter what.”

When asked about his past stance on Brexit, Mr. Johnson shot back: “The issue is that’s the way the country voted and that is what is now going to happen.” But he also hoped that his son would quickly move on from Brexit and tackle other issues. “Obviously you’ve got to get Brexit out of the way, but a dog is not just for Christmas and this Prime Minister is not just for Brexit, let’s look ahead.”

For now, his plan is to get the family together this weekend and celebrate. “We must have a family meeting to say how should we celebrate,” he said. “We will celebrate, that’s for sure. I think at this particular weekend there’ll be a lot else happening but we’ll find the time.” 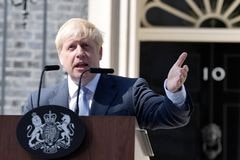 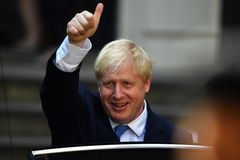 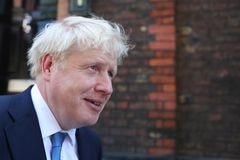