Britain began its first day outside the European Union with a mix of joy and anger as people gathered across the country to celebrate and bemoan Brexit.

Thousands packed Parliament Square outside Westminster Friday night to join in a boisterous countdown to 11 p.m. – midnight in Brussels – when 47 years of British membership in the European club of nations officially ended.

Cheers and outbursts of God Save the Queen rang out as the clock struck 11. Flag poles around the square were lined with Union Jacks, and several buildings were lit up red, white and blue.

“I’m over the moon,” Raymond Berry said as he stood in the midst of the crowd holding a giant Union Jack. “It’s been a long time coming. Forty-seven years of not quite fitting in.” Shortly after he spoke, strains of Land of Hope and Glory and Rule Britannia filled the square.

Margarita Martel came dressed as Britannia and handed out “Happy Brexit Day” badges. “I’m overjoyed,” she said with a wide smile. “Finally it’s happening after three and a half years.”

Not everyone in the crowd shared her enthusiasm.

Martin O’Brien stood at the back with an EU flag tucked into his backpack. “I’m not happy at all,” he said. “Some day, our children are going to ask 'Why did we leave the EU?’ ”

Elsewhere, the mood was equally sombre and there were dozens of candlelit vigils to mourn Britain’s departure. In Glasgow, a group called “Leave a Light on for Scotland” sang the EU’s anthem, Beethoven’s Ode to Joy, and pledged to work for Scotland to rejoin the bloc. In Northern Ireland, several gatherings were held along the Irish border by those determined “to protest against the North being taken out of the EU against our will.”

Friday is “a very sad moment in my life,” said Richard Coward, who lives in King’s Lynn in eastern England and supports Britain remaining in the EU. “It’s not just political, it’s personal. … I now fear for my country’s future.”

Prime Minister Boris Johnson used a television address to try to strike a balance between the opposing views. He said he recognized that some people saw Friday as “an astonishing moment of hope,” while others felt “a sense of anxiety and loss.”

“I understand all those feelings, and our job as the government – my job – is to bring this country together now and take us forward,” he said. “And the most important thing to say tonight is that this is not an end but a beginning."

World leaders also reacted, with many, including Prime Minister Justin Trudeau, wishing Britain well. Mr. Trudeau said he was confident that Britain’s departure from the EU would be orderly and he said the federal government has been talking to British officials about a trade deal. “We have actually been engaged with the United Kingdom over the past few years working on that transition plan,” Mr. Trudeau said Friday in Montreal.

Little will change immediately in Britain. The country will stay in the EU’s single market and contribute to the bloc’s budget until the end of the year. But it won’t participate in EU institutions, such as the European Parliament or the European Court of Justice. Both sides will use the time to negotiate a far-reaching agreement covering everything from trade and security to fisheries, data management and transportation. If a deal isn’t struck, Britain will end up entirely outside the EU on Jan. 1, 2021, and commerce will be governed along World Trade Organization rules.

There are already signs that the talks will be difficult. Mr. Johnson has said that he wants a comprehensive deal, much like the Canada-EU trade agreement, and he won’t extend the deadline. He is to outline his priorities for the negotiations on Monday and has rejected calls from the EU to keep Britain largely aligned with the bloc’s regulations.

The EU is concerned that if Britain diverges too much on issues such as taxes, state aid and environmental standards, British companies could have an unfair advantage. Chief negotiator Michel Barnier said Britain’s access to the EU market will depend on how closely it follows the bloc’s rules to ensure a level playing field. “They want to diverge from the EU rule book – the question is, will it be a reasonable divergence, or will it lead to a situation of social dumping, of unfair competition?” Mr. Barnier told reporters on Friday.

Most experts doubt that 11 months is sufficient time to negotiate a substantive deal. “I suspect that actually some kind of last-minute fudge will be whipped up if it needs to be,” said Tim Bale, a politics professor at Queen Mary, University of London. “It will involve, then, quite a lot of uncertainty for British business.”

Amid the celebrations, some people like Andreas Zacharia found the whole thing mystifying. Leaning against his bike as he watched the countdown, Mr. Zacharia shrugged and said: “Everybody is going to wake up tomorrow and it’s just another day.” 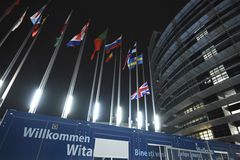 Canada not rushing to post-Brexit deal with Britain, as business urges calm
January 31, 2020 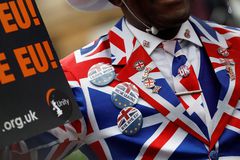 Opinion
Brexit happened: The great hollowing out for Britain is about to begin
Subscriber content
January 31, 2020 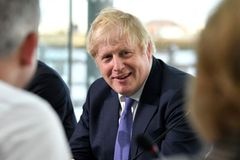