On Monday, appeals court judges unanimously upheld their decision to reject da Silva’s appeal of his conviction on corruption charges – a move that brings him one step closer to being barred from the presidential ballot and put behind bars.

Despite his legal woes, da Silva is leading polls for the October presidential election, and he is currently travelling through Brazil’s south to rally his supporters. His caravan has been met by protesters along the way.

At rallies Monday, he repeated his contention that the charges against him are trumped up and meant to keep him from regaining the presidency.

“I don’t respect the (court’s) decision because if I respect a decision that is a lie, when my great-granddaughter ... grows up, she will feel shame that her grandfather was a coward who didn’t have the courage to fight,” he told a crowd in Iguacu Falls in Parana state.

At an earlier rally in Francisco Beltrao, protesters threw eggs into the crowd, as they have done at several other sites along the tour.

That’s a sign of how divisive a figure the once-beloved politician has become. For some, the man universally known as Lula is a symbol of the boom years, when millions of Brazilians rose out of poverty. For others, he represents widespread corruption in Brazil’s halls of power.

Da Silva was convicted last year of trading favours with construction company OAS in return for the promise of a beachfront apartment. The conviction was upheld by a group of federal magistrates in January, and they increased his sentence to 12 years and one month in prison.

In Brazil, the defence can enter a motion that questions such decisions, pointing out inconsistencies or contradictions. But the magistrates rejected the substance of the defence’s motion Monday, meaning the conviction stands. They did acknowledge one mistake in how they referred to a company, which has no concrete effect on the case’s outcome.

Da Silva’s defence still has one more motion it can file with the same court, but law professor Carolina Cleve said it was very unlikely to change anything since Monday’s ruling clearly showed the court’s position.

Cristiano Zanin Martins, da Silva’s lawyer, said the team would wait to read the full text of Monday’s decision before deciding what kind of appeal they would make next. Martins called the conviction “illegal,” and da Silva and his supporters have vowed to appeal all the way to the Supreme Federal Tribunal.

“Why will we fight to the end? To prove his innocence, for his right to run” again for the presidency, former President Dilma Rousseff, who was da Silva’s vice-president, said at a news conference in Rio. She criticized protesters who have thrown stones, firecrackers and eggs at da Silva’s buses and sometimes his supporters during his caravan tour.

Under Brazilian law, once all motions related to the first appeal are exhausted, the defendant can be ordered to start serving his sentence. The law also says he should be barred from running for office.

Still, there is yet another wrinkle in da Silva’s case. He has filed a pre-emptive habeas corpus petition with the Supreme Federal Tribunal, so he cannot be jailed until justices rule on it. They are scheduled to do so on April 4.

It seems likely da Silva will be jailed in the coming weeks, but he would be allowed to continue to appeal his conviction to higher courts while serving his sentence.

Even experts say this case is complicated – and not just because the law is open to interpretation.

“We’re in a very murky scenario,” said Cleve, who is a professor of constitutional and electoral law at the Autonomous University Center of Brazil. “Politics is interfering in justice.” 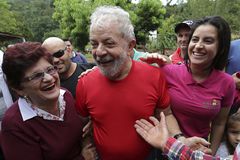 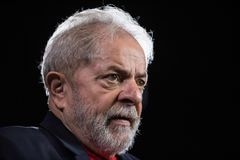 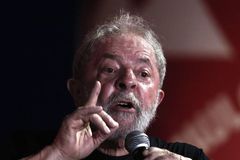