His fist thrust in the air, former President Luiz Inácio Lula da Silva of Brazil triumphantly walked out of prison Friday, after the Supreme Court issued a broad ruling that allows defendants to remain free while their appeals are pending.

Though da Silva cannot run for office unless his criminal convictions are overturned, his mere release could upend Brazil’s politics by pitting him as a fiery, leftist rival to President Jair Bolsonaro, whose far-right policies have left the country deeply polarized.

The charismatic da Silva, 74, universally known as Lula, is widely expected to plunge back into the political fray, bolstered by his long-standing popularity: As president, he launched programs that lifted millions out of poverty, expanded access to higher education and promoted racial equality.

On Friday, he walked out of a police building in the southern city of Curitiba shortly after 5:30 p.m., raised a fist and waded into a crowd of supporters waving his party’s trademark red flag. He kissed babies and pulled supporters into bear hugs before addressing the crowd.

His words were interrupted by fireworks as he railed against the police and prosecutors who handled his case. “They tried to criminalize the left,” he said. “They didn’t lock up a man; they tried to kill an idea. But an idea can’t be destroyed.”

There was no immediate comment from Bolsonaro, a brash nationalist who shot to the presidency last year on a wave of anger about corruption and violence. He has repudiated da Silva’s party at nearly every turn, vowing that socialists will never again take the reins of the country.

Left-wing leaders call Bolsonaro a dangerous authoritarian who has violently cracked down on criminal suspects, imposed environmental policies that are driving up deforestation and ordered cuts to government spending that have weakened the safety net for Brazil’s poor.

Da Silva’s freedom gives the opposition, which has been splintered and largely rudderless in the Bolsonaro era, a towering figure to lead the charge. Da Silva offered a preview of the issues he will champion Friday, speaking of growing hunger and unemployment under a president who is privatizing state companies and trimming pension benefits.

But there was no clear sign of how visible da Silva intends to be in the months ahead or whether he intends to position himself for a new presidential run, which would require either winning his court battles or changing the law that bars people convicted of crimes from seeking elected office.

Still, da Silva’s supporters hailed the court decision as a victory after two years of setbacks, including his conviction in 2017 and his party’s defeat in the election last year. Since da Silva began serving a 12-year sentence in April of last year, they have campaigned at home and abroad for his release, calling him a political prisoner.

“This restores a sense of hope in Brazil,” said Maria do Rosário Nunez, a member of Congress from da Silva’s Workers’ Party. “Lula’s freedom can offer a rebuttal to the rigid views they are trying to impose in the country,” she added, referring to the current government.

Thursday’s 6-5 ruling stands to affect thousands of inmates, including several high-profile people convicted on corruption charges. It is also expected to complicate Brazil’s efforts to root out endemic corruption: Dozens of high-profile politicians have been ensnarled in corruption cases in recent years, as authorities unraveled complex kickbacks and campaign finance schemes.

Prosecutors say that with the Supreme Court’s decision, a reversal of a 2018 ruling, they will now lose valuable leverage in corruption cases because the threat of imprisonment has aided law enforcement officials in persuading defendants to cooperate in criminal investigations.

The case that led to Thursday’s ruling was litigated by two political parties and Brazil’s bar association. The plaintiffs argued that Brazil’s 1988 constitution — which says “no one shall be considered guilty until their case is fully adjudicated” — gives defendants the right to remain free as long as appeals are pending.

Until the ruling, criminal defendants could be ordered to start serving a sentence once the first appeals court upheld their convictions. Brazil’s courts have wide discretion to imprison people convicted of violent crimes, but defendants appealing those convictions could, in theory, seek relief under the new ruling.

The Supreme Court last ruled on this legal question in the lead-up to da Silva’s imprisonment in 2018, following his July 2017 conviction on corruption and money laundering charges for accepting the use of a seaside apartment as part of what prosecutors described as a kickback scheme.

That ruling was the final blow to da Silva’s bid to run for a third presidential term last year, paving the way for the election of Bolsonaro. Suspicion that da Silva’s prosecution had been motivated by politics became widespread after Bolsonaro appointed Judge Sérgio Moro, who handled da Silva’s case, as justice minister.

Earlier this year, a trove of cellphone messages exchanged by prosecutors raised fresh questions about the fairness of da Silva’s prosecution. The messages made clear, for instance, that Moro had actively advised prosecutors on strategy in the case, conduct that legal analysts have called an ethical and legal transgression.

Moro said Friday in a statement that he hopes Congress will change the constitution to allow imprisonment after an appeals court has upheld a conviction.

“At the end of the day, judges interpret the law, and lawmakers make laws,” said Moro, who has disputed that he acted improperly in da Silva’s case.

Da Silva had been serving a 12-year sentence in the apartment case and faces several other corruption charges. In February, he was convicted in another graft case and sentenced to 13 years in prison.

The prosecutors who handled da Silva’s case, disappointed by the court’s ruling, said in a statement that it contradicted “the fight against corruption, which are priorities for the nation.”

Thiago de Aragão, an analyst at the Arko Advice political risk consultancy in Brasília, said the ruling would likely make investors think twice about making long-term bets in Brazil because it will inevitably be construed as a setback in the country’s fight against corruption.

Supporters of da Silva, who governed Brazil from 2003 to 2010, began celebrating the ruling hours before he was freed, at a rally outside the police building in Curitiba. After Judge Danilo Pereira Júnior ordered da Silva released, his official Twitter account posted two words — “Lula free” — and a video montage of him training in a gym, to the song “Eye of the Tiger.”

The former president faces two main options in his return to politics, said Claudio Couto, a political scientist at Fundação Getulio Vargas University: to unite segments of the opposition by taking a conciliatory, moderate approach to politics or to focus on running for president once more in 2022.

“If he does the latter, the opposition will continue being divided, and we’ll continue in a polarized environment, perhaps even more than now,” Couto said.

Da Silva gave no indication of his thinking as he left from the crowd Friday. He thanked supporters and said he did not leave incarceration embittered. 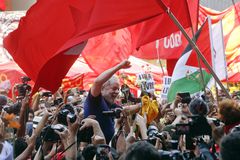