As a pro-EU Italian-Canadian who lives in Rome and travels throughout Europe, Brexit made absolutely no sense to me. What was the point of it when Britain already had the best of both worlds?

Britain had far more independence than most EU countries because it kept its own currency, was not in the Schengen passport-free zone and opted out of all sorts of EU legislation that it found annoying. Yet, Britain’s “EU-lite” membership allowed it to retain full access to the world’s biggest single market. What was not to like?

Almost three years after the Brexit referendum, I can now see its attractions – not for Britain, but for the EU. Yes, the EU is about to be shorn of its second-biggest economy and its most powerful neo-liberal voice, a useful counterbalance to the sometimes crazed “United States of Europe” integrationist forces in Berlin and Paris (more so Paris). At the same time, though, Brexit has snuffed out all the fantasies of me-too exits among the most Euroskeptic political parties, of which there are many – some of them quite powerful.

At first, the fear among pro-EU parties and voters across the 28-country union was that Brexit would inspire copy-cat vanishing acts: Italy, Greece, Hungary, Poland and others would all hit the road as the domino theory was put into action, leaving the core EU limited to Germany, France and the Benelux countries.

But Brexit has proved such a shambles, such a farcical cock-up of Monty Python proportions, that it has scared the bejesus out of the EU naysayers. They see Britain ripping itself apart, its parliamentary sessions looking like an outtake from The Bourne Identity, its streets filling with millions of anti-Brexit protesters. Britain faces crashing out of the EU next month with potentially devastating economic and political consequences. The leaders of the ever-more-popular nationalist parties in the EU are watching the unfolding mess and saying: Never mind, we’ll take a pass.

Last week, I met Steve Bannon, Donald Trump’s former chief strategist and boss of his 2016 presidential campaign, at his hotel in Rome. He is the driving force behind The Movement, a new organization to support nationalist parties and groups in Europe as the EU heads into spring parliamentary elections. He has first-name relationships with some of Europe’s best-known Euroskeptic and anti-migrant political leaders, among them: Italian Deputy Prime Minister Matteo Salvini, leader of the League party; Marine Le Pen, leader of France’s Rassemblement National (formerly the Front National); and Hungarian Prime Minister Viktor Orban, who delights in attacking European Commission President Jean-Claude Juncker and George Soros, the Hungarian-born billionaire who sponsors pro-liberal and pro-EU causes.

“I have not met one politician in any of these sovereignist, nationalist, populist parties who say they want out, no discussion of exit,” he told me. “What they want is massive reform of the EU.”

It wasn’t too long ago that the we-want-out movement was gaining momentum.

Ms. Le Pen was calling for France to leave both the EU and the euro zone. During the financial crisis years (2008 through 2012), Greece was on the verge of bolting – or getting pushed out, the latter scenario promoted by Germany’s then-finance minister, Wolfgang Schaeuble. In the run-up to the 2018 Italian elections, both Mr. Salvini’s League party and the Five Star Movement, which would form a coalition government, talked about holding a referendum on the euro. Since then, as Brexit went from a walk in the park to a slog in the bog, the referendum idea has died. Mr. Salvini, who has a good chance of becoming Italy’s next prime minister as his party soars in the polls, now says he supports Italy’s membership in both the EU and the euro zone.

Their desire to stay put does not mean the Euroskeptics in the EU-27 (as the EU minus Britain is called) have been scared into submission. They will remain alive and healthy; they just won’t push their agenda to the point the EU-27 will shatter like a dropped mirror. What seems likely is that any further integration moves are doomed, even though French President Emmanuel Macron – perhaps the last champion of a European superstate – is pushing hard to keep those moves alive.

The countries where Euroskeptic parties either form the government (Italy, Hungary and Poland, for instance) or play a big role in parliament (Germany, where Alternative for Germany is the biggest opposition party) might adopt an à-la-carte EU strategy, as Britain so cleverly did before the 2016 referendum. In addition to taking passes on the euro and Schengen Area, Britain took a partial pass on the EU budget – it gets a rebate – as well as its Charter of Fundamental Rights.

Already, Poland and Hungary are refusing to take their quota of the EU’s refugee-resettlement plan. By running a fat deficit and adding to its national debt every year, Italy is ignoring the EU’s fiscal compact rules, as Germany and France have done now and again in the past. And so on.

The Euroskeptic parties and governments will be especially wary of the pro-EU governments in Paris and Berlin, neither of which will face a countervailing force once Britain leaves. Brexit has done the EU a big favour by killing off the prospect of copy-cat departures. What it has not done is kill off Euroskepticism. The Euroskeptics will just happily grind away within the EU tent instead of outside it.

British lawmakers vote to seize control of Brexit from PM May for a day
March 25, 2019 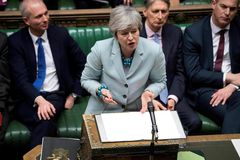 Theresa May’s allies fend off reports of a plot to oust her amid Brexit angst
March 24, 2019 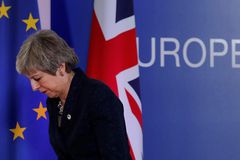 Theresa May faces pressure to step down as British prime minister to save Brexit
March 24, 2019