Britain’s vote in mid-2016 to leave the European Union did not trigger spasms of existential angst within the EU. Yes, the loss of the EU’s second-biggest economy would come as a blow to the EU, but not a fatal one. The optimists on the warmer side of the English Channel even found a silver lining.

Shorn of Britain, a perennial irritant, the EU could come closer together, forging a genuine economic and political family. There would be peace, democracy and wealth for all. Never mind the Brits, who were only half-assed members of the EU to begin with - they had taken a pass on both the euro and the passport-free Schengen zone. Fine, let them turn their country into a cold-water version of the Cayman Islands.

Almost three years after the vote, the dream that Brexit would free the remaining 27 EU states to accelerate the great European integration project has shattered. No substantive integration moves – none – have been made since Britain decided to bid adieu to the continent. With the rise of populist, Euroskeptic parties and governments in Italy, Poland, Hungary, Czech Republic and elsewhere, integration might even shift into reverse.

The troubled European project delights the hardcore Brexiteers. Look, they say, we’re not alone; even the Europeans are losing their love affair for Europe. The Brexiteers are pushing Parliament ahead with their plan to ditch the EU by March 29. On Tuesday, British Prime Minister Theresa May won a series of parliamentary votes that will allow her to return to Brussels to try to rewrite the exit terms, including (she hopes) an overhaul of the so-called Irish backstop - the insurance policy that would prevent a hard border forming between the Republic of Ireland and Northern Ireland.

The EU27 (as the EU minus the United Kingdom is called) is not a pretty sight at the moment. The migrant policy is still a shambles, with no coherent plan to spread and integrate migrants across the member states. Italy’s leading populist, deputy prime minister and interior minister Matteo Salvini, has seen his popularity ratings soar as he exploits the migrant-policy disarray. He has stopped charity rescue ships from docking at Italian ports and used France’s refusal to resettle some of the hundreds of thousands of migrants bottled up in Italy to launch a diplomatic spat with the “terrible” French president, Emmanuel Macron. Italy and France are growing father apart, with the liberal, pro-integration Mr. Macron representing everything the right wing, Euroskeptic Mr. Salvini detests.

Mr. Macron also has troubles with his cherished eastern neighbour, Germany, where chancellor Angela Merkel is turning into a lame duck after declaring she will not run for re-election.

His plan to launch a huge eurozone budget was flatly rejected by the Germans and his urgings that Germany boost domestic spending to reduce its trade and current account surpluses, all the better to lift demand across the EU, did not receive a sympathetic hearing in Berlin. Meanwhile, the effort to create an EU banking union, impossible without wholesale German support, is making only halting progress. An EU-wide deposit insurance scheme, the key component of the banking union, remains out of reach.

Mr. Macron hasn’t done Ms. Merkel many favours, either. Ms. Merkel, who invited a million refugees from Syria and other countries to Germany in 2015, wants a European plan to share refugees and migrants. But Mr. Macron has resisted the idea, perhaps because there is no appetite among French voters to take in more foreigners and because Poland, Hungary, Czech Republic and other countries want fewer migrants, not more. He’s also rather distracted by the massive and violent gilets jaunes protests that have paralyzed big French cities off and on for months.

Still, Mr. Macron and Ms. Merkel talk a good game and insist they are devoted to EU integration. Last week, they signed the Treaty of Aachen in Aachen, which was the capital of the Holy Roman Empire under Charlemagne (it’s located in modern-day North-Rhine Westphalia on the German-French border). The new treaty pledges greater military, security, environmental, education and foreign policy co-operation between France and Germany, including the creation of a “French-German economic area using common rules.”

But the treaty, while ambitious overall and a step in the right direction, is vague and seemed to highlight the divide in the EU. While France and Germany want to move closer together over the long term, in spite of the current differences between Mr. Macron and Ms. Merkel, much of the rest of the EU does not. The treaty also seemed to confirm that France and Germany are willing to go it alone, and that other countries may join if they wish.

The economy isn’t helping the European project. It’s slowing across the EU; Italy, the third largest economy, may be in technical recession and Germany might not be far behind. Which brings us back to Brexit. Ms. May wants more favourable exit terms from the EU, but the EU has made it abundantly clear that her efforts will be in vain. The EU has closed the Brexit file – take it or leave it. The EU’s stance can only boost the changes of a crash-out scenario in March, one that would be highly damaging economically to both Britain and the EU27. If that happens the promise of EU prosperity will take another blow. The great EU project needs help, but help is not coming.

Theresa May on collision course with EU after proposing changes to Brexit deal on Irish border issue
January 29, 2019 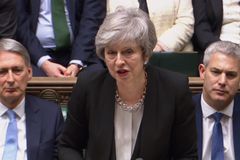 May under new pressure to secure Brexit concessions from EU
January 28, 2019 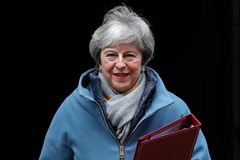