Britain is facing another Brexit delay and more controversy after Prime Minister Boris Johnson was forced to grudgingly ask the European Union for a three-month extension to the country’s departure.

Mr. Johnson had to seek the delay on Saturday night after parliamentarians voted to withhold approval of a Brexit deal he had struck with the EU last week. Members of Parliament voted 322 to 306 during a special session earlier on Saturday to hold off on considering the deal until the Prime Minister has introduced legislation outlining how it would be implemented.

Under a law passed last month by MPs, over the Prime Minister’s objections, the vote meant Mr. Johnson had to send a letter to EU leaders asking them to extend the deadline for the United Kingdom to leave the bloc to Jan. 31, 2020, from Oct. 31.

Donald Tusk, the head of the EU Council, said on Sunday the bloc’s leaders would consider the request over the next few days. French President Emmanuel Macron and some other leaders have expressed reservations about a delay, but it is widely expected they will ultimately grant one since the EU wants to avoid a no-deal Brexit.

The extension request ended a tumultuous weekend for the British Prime Minister’s Brexit strategy and increased the uncertainty about what comes next. There’s a chance the deal could still be ratified by Parliament before the end of the month, but there are also growing calls for a snap election or a referendum on the agreement. There’s also a possibility Britain could leave without a deal on Halloween if the EU refuses to grant an extension.

Mr. Johnson has vowed to push ahead with ratification and he called on the EU not to agree to a delay. He made it clear on Saturday that he only sent the letter requesting an extension because he was compelled to by law. He demonstrated his frustration by refusing to sign it and sent a second note to Mr. Tusk urging the EU to reject the request.

Mr. Johnson wrote that he believed “that a further extension would damage the interests of the U.K. and our EU partners.”

He also insisted that he remained committed to leaving the EU on Oct. 31 and he plans to introduce legislation implementing the deal this week in Parliament.

On Sunday, the cabinet minister in charge of Brexit preparations, Michael Gove, said the government had “the means and ability” to leave on Oct. 31. “We know that the EU want us to leave, we know that we have a deal that allows us to leave,” Mr. Gove told Sky TV. In a warning to MPs, Mr. Gove added that there was no guarantee the EU would agree to a delay, which meant “the risk of leaving without a deal has grown.”

Opposition MPs signalled on Sunday they won’t be backing down either. The Scottish National Party plans to move a motion of non-confidence in the government this week, which could trigger an election. “We are prepared, once we’ve got that extension in place, to take our responsibilities and move a motion of no confidence and I would be looking for parliamentary time to do that and I would expect everyone else to step up,” Ian Blackford, the SNP’s Leader at Westminster, told the BBC.

The Labour Party said it would seek parliamentary support for a referendum on Mr. Johnson’s deal. “Whether it’s this deal or any future deal, it has got to go back so the public can say, ‘Do you want to leave on these terms? If so, then we do. If not we remain [in the EU],’” Labour MP Keir Starmer told the BBC. He added that Mr. Johnson had acted like a child in refusing to sign the extension request. “If we crash out because of what he’s done with the letters … he bears personal responsibility for that.”

There are signs Mr. Johnson might just have enough support in Parliament to get the deal ratified when it comes up for a vote. Many MPs who voted for a delay on Saturday said they would likely back the agreement once they saw the detailed legislation. In particular, Mr. Johnson appears to have won over several members of a group of 21 MPs he expelled from the Conservative caucus last month after they sided with the opposition to block a no-deal Brexit. Many of those MPs welcomed the agreement and indicated they will vote for it once the legislation is introduced.

Mr. Johnson needs more than fellow Tories to get the deal through Parliament. The Conservatives don’t hold a majority of seats and their ally, Northern Ireland’s Democratic Unionist Party, won’t support the agreement. That means Mr. Johnson must win over some Labour MPs and so far about a dozen have hinted that they will defy their party’s leadership and support the agreement.

The government is expected to introduce legislation implementing the deal as early as Monday with a vote coming on Tuesday. 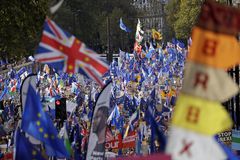 Boris Johnson scrambles for support ahead of crucial Brexit vote on Saturday
October 18, 2019 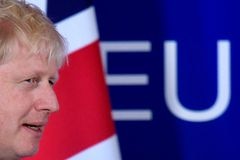 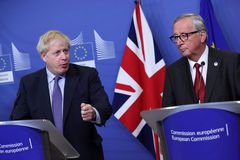