British Prime Minister Boris Johnson is facing growing pressure to reverse his go-slow approach to the new coronavirus after the English Premier League announced on Friday that it will suspend all soccer games for at least three weeks.

The EPL is by far the biggest soccer league in the world, and it generates billions of dollars in revenue for clubs and broadcasters. League officials said on Friday that matches would be suspended until April 3 “at the earliest.” The move came after Arsenal manager Mikel Arteta tested positive for the coronavirus on Thursday along with players from several teams. The English Football League, which oversees three lower divisions, and the Football Association, the country’s governing body, followed suit with similar suspensions.​

The leagues had been hoping to avoid the suspension – and a massive financial hit – by playing games behind closed doors. But that became untenable after Mr. Arteta and more players tested positive and began to self-quarantine.

Soccer leagues in France and Germany took the same action on Friday, and the governing body for the sport in Europe cancelled upcoming games in the Champions League and Europa League. A decision on whether to scrap this summer’s Euro 2020 soccer tournament, which involves national teams across Europe, will be made next week. The Spanish soccer league cancelled its games on Thursday.

The announcements came amid increased criticism of Mr. Johnson’s response to the outbreak. Britain has 590 confirmed cases of the virus, although officials say up to 10,000 people may have already been infected. A total of 10 people have died, all elderly with underlying health issues.

On Thursday, Mr. Johnson ruled out closing schools or banning public gatherings for now, insisting those measures would not be effective in helping to stop the spread of the disease. Instead he encouraged people who are ill to stay home for a week, suggested the elderly should avoid cruises and advised schools to cancel trips abroad.

Former health minister Jeremy Hunt called the Prime Minister’s decision not to ban large public gatherings “surprising and concerning” given that Britain was about four weeks away from where Italy is with the virus. “You would have thought that every single thing we do in that four weeks would be designed to slow the spread of people catching the virus,” said Mr. Hunt, a Tory MP who ran against Mr. Johnson for leadership of the Conservative party last summer.

Jimmy Whitworth, a professor of international public health at the London School of Hygiene and Tropical Medicine, told reporters that he was surprised stronger steps had not yet been taken by the government. “Based on evidence from other countries, the most realistic approach to this is to initiate the strongest public health measures that will be supported by the general British public,” he said.

Other European countries have gone much further than Britain, including many that have fewer confirmed cases of the illness. France, Ireland, Austria and Portugal are among a number of countries that announced plans on Thursday to close schools and universities, and ban public gatherings. The Czech Republic has restricted travel and limited the opening hours of bars and restaurants. Scotland’s First Minister Nicola Sturgeon also said on Thursday that the government plans to ban large public gatherings as of next week.

Sir Patrick Vallance, the British government’s chief scientific officer, defended the steps taken so far. Ensuring that sick people stay at home will have the biggest impact on the spread of the virus, he told the BBC on Friday. “Our aim is to try and reduce the peak, broaden the peak, not suppress it completely,” he said. "Also, because the vast majority of people get a mild illness, to build up some kind of herd immunity so more people are immune to this disease and we reduce the transmission.”

Sir Patrick also said closing schools hasn’t been recommended yet because children do not seem particularly vulnerable to the disease. He also said schools would have to shut for around four months in order for it to be effective, which could cause other problems. The government hasn’t ruled out school closures, but Sir Patrick said there were no indications yet that it was necessary.

Disney closing theme parks in California, Florida through end of month due to coronavirus concerns
March 13, 2020 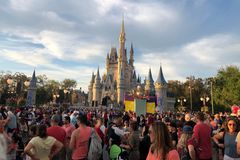 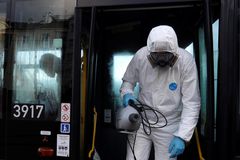 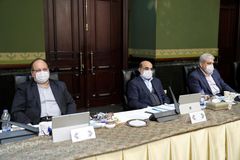